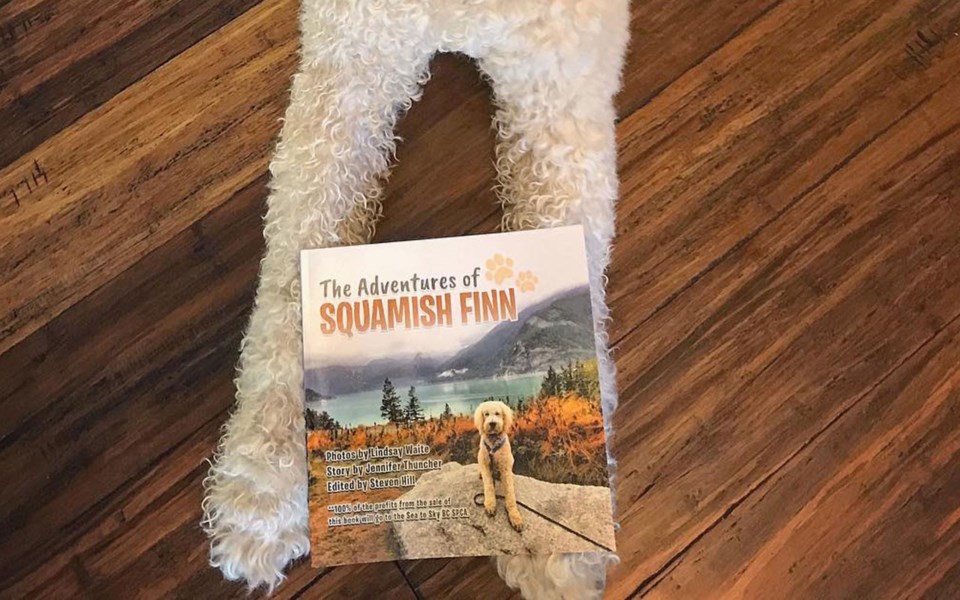 Finn poses with The Adventures of Squamish Finn, which he stars in. Photo by Lindsay Waite/submitted

Over the last year, the pup's owner, Lindsay Waite, has been sharing images of him posed in picturesque places in the corridor.

"I said, 'You should really do a kids' book with these," says Jennifer Thuncher, editor of The Chief. "After a year of saying that, I was like, 'Maybe that's not your thing.'"

Writing, however, is her thing.

So, last summer while on vacation hiking in Pemberton, Thuncher put pen to paper—or, more accurately, words to Waite's photos—to create a children's book called The Adventures of Squamish Finn. All the proceeds from its sale will go towards the Sea to Sky BC SPCA.

"Last year I had a weekend off and I was up in Pemberton hiking ... I'm terrible on vacations. I can't handle it. I'm so jittery and I need to be doing something all the time. Before the next hike, my husband said, 'Why don't you sit over there and write that book you've been talking about?' On that vacation, I wrote it," Thuncher explains.

Using Waite's photos of Finn from around the corridor and Vancouver—at Newport Beach, beside the Mamquam River, on Vancouver's Seawall—to build the story.

It follows Finn's happy Squamish life frolicking in the outdoors with his two moms until one day, his uncle and his dog—a black, shiny boxer named Louise—come to visit from the big city.

Louise plants a seed: Vancouver life is better than small-town Squamish. Frustrated after he has to go to work with one of his moms, Finn decides to run away and check out Louise's claims.

"He runs through all these landmarks in Squamish on his way to Stanley Park—then gets really scared in the park in the city (with) the big, honking machines, and he ends up trying to get home," Thuncher says. "He gets home and realizes Squamish is the best place ever."

It's perhaps a relatable tale—particularly in Whistler where so many residents leave and return. "We all get that," Thuncher adds. "There are some people who say, 'In the city there are more things to do. You can go to more clubs and restaurants. There's more activity.' It's something all of us have heard in the corridor."

But, of course, many of us draw the same conclusion as Finn.

The book's target audience, meanwhile, gave a stamp of approval before Waite and Thuncher sent it to be printed on Vancouver Island. (The pair self-published the project.)

"I have kids, but they're grown," Thuncher says. "Lindsay has nieces and nephews, so we did test runs on them. It was cute. They didn't like that Finn ran away, but they were happy he made it back."

As for the SPCA, they were pleased to hear 100 per cent of the book's profits would be coming their way.

"For both of us, it's a fun project," Thuncher says. "There was never any thought that we'd make money from it. We didn't want it to be something we were earning from. We both have dogs and, for exploiting Finn's cuteness, we thought we should give back to the local SPCA."

You can get a copy of The Adventures of Squamish Finn online at Barnes and Noble (https://www.barnesandnoble.com/w/the-adventures-of-squamish-finn-jennifer-thuncher/1130921099?ean=9780228811022). There is also an ebook version on Amazon.