Nigussu puts music and emotion behind the brush 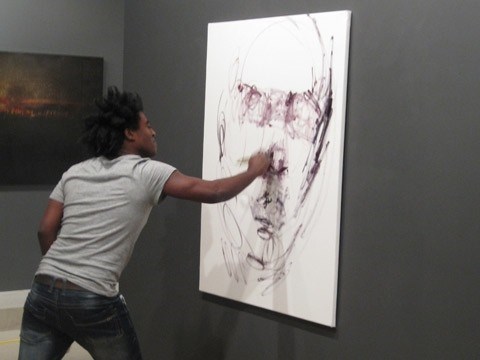 If eyes really are the window to the soul, Yared Nigussu spends a lot of time staring into the depths of his subjects' very essence.

The Ethiopian-born artist has spent the past two years creating striking portraiture, intimate close-ups of a range of faces that have spoken to him in some way.

As he explains it, he is drawn to the unique anatomy and features of faces, and when he comes across a subject that captures his attention, he often will do a very rough sketch, then work mainly from memory.

"After, I just add my paint and the contrast, after," he said. "It's not really necessary to have a model in front of me."

But more important than the anatomy of the face are the eyes, and the story he glimpses behind them. He recalled one such telling encounter with a man who seemed riddled with sadness - a child soldier - and who ultimately inspired him to start with portraiture.

"Just behind his portrait, it was his eyes," Nigussu reflected. "That's why I was really interested in the portraits of people, finding the history behind the model."

His portraits are meant to be portraits of humanity, meant to convey a sense of history and experience behind each individual.

"It is what I see, always when I meet people, I see their eyes. I can feel it. So that expression (the eyes are the window to the soul) is really for my paintings."

Nigussu's affinity for the arts began when he was in grade school and he decided to enter an art competition. He did well, and soon found himself immersed in the art world, hanging out with other artists, and anxious to learn more. He went on to study a broad range of artistic styles at the Addis Ababa University of Fine Art for four years, focusing on the world of contemporary abstract art for his graduation work. In fact, if you look closely, you can glimpse elements from the contemporary abstract realm in his portraiture today, in his bold brush strokes and colour choices.

Nigussu earned his bachelor's degree before getting a scholarship to study in France. There, he discovered a diverse population, rich in culture and ethnicity, and was struck by the range of faces. Specifically, he was struck by the faces he saw in the crowds. He was inspired to capture them, on canvas.

"The theme of portrait was found in France," he recalled.

"In France, I started really seeing all sorts of human faces."

Nigussu had discovered a subject matter that truly spoke to him, allowing him to feel connected to his work.

"Actually, my works, I don't know if they can tell a lot, but for me personally, I talk with them, and I understand people."

After France, Nigussu wanted to continue to travel and experience the beauty of the rest of the world and discover more inspirational faces. So, he and his wife immigrated to Vancouver in September 2009. Since then, he has been exhibiting at Raw Canvas in Yaletown and on Granville Island, even painting live on occasion.

"It's just fun, you know? First, I started for my openings, because I wanted to do something different, and people really loved it."

Last Thursday, Nigussu made the trip to Whistler to paint for an audience, accompanied by a musician on acoustic guitar. A small crowd of art appreciators bundled up in winter coats and boots quietly sipped glasses of wine and stood by, enthralled, as Nigussu rapidly transformed a blank canvas into a stark portrait with bold brush strokes and rich colours, working only from a small, rough sketch.

"Actually, it was a friend of mine," he said, explaining that one night, he saw her in a different light and was inspired to paint her.

His approach to painting is very focused, even when he isn't painting in front of an audience: he usually completes each painting in one two- or three-hour session in the studio. But it's not so much a sense of urgency that propels him as a practical way to maintain his momentum.

"When I come back to the painting, if I'm going to try to finish, the painting will be really complicated. If I start, I have to finish it!"

"It's like, you see, you shoot," he said, comparing himself to a photographer.

With literally millions of unique faces in the world, there doesn't seem to be much chance that Nigussu will run out of inspiration anytime soon.

"I'm thinking always I'll be really tired of that... but people are always inspiring me!"

On Tuesday evening, Nigussu was busy in his studio painting another portrait, but this time, his subject matter was slightly different: rather than a human face, he was creating the face of a buffalo.

"I did only his face, but it's really interesting, you know? Just, I'm seeing the humanity on their faces," he mused.

And there may be many more buffalo to come.

"When I pick a subject, I will go forward until I get tired, so I might have a lot of buffalo!"