No rest for the wicked

Big John Bates and the Voodoo Dollz sauce up the BBQ Championships with blues and burlesque
Aug 3, 2007 8:46 AM By: Nicole Fitzgerald 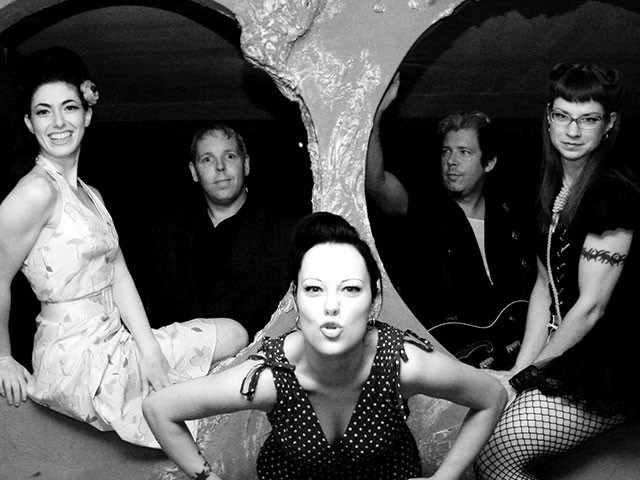 Who: Big John Bates and the Voodoo Dollz

“We want to be able to provide a totally different show,” said John Bates of Big John Bates and the Voodoo Dollz. “I’ve always really liked burlesque and knew a lot of dancers when we got started. It’s a good marriage between the two art forms.”

The mainstay of Big John Bates and the Voodoo Dollz is its charismatic, sultry garage blues with gothic edge produced from the trio of Bates on gretsch, dobro, banjo and lead vocals accompanied by Care-oline on upright bass and JT Massacre on drums. With each musician married to their instrument for the duration of the show and no frontman freed up on mic to work the crowds, Bates’s burlesque dancers were the perfect way to draw music revelers into the show.

“It’s not just what songs you play, but getting your audience involved,” he said.

The Vancouver-based showmen and showgirls deliver a dark and bizarre, but not without humour, one-of-a-kind show that carries listeners into another world straight from hell.

Throw all morals aside, the show once rooted in psychobilly rock now moves to a more blues-driven sound and punked-up surf exotica with showstoppers not afraid to deliver shock value.

Bates, who grew up nursing the music of Alice Cooper, said anyone who gets off on the Cramps, Reverend Horton Heat, Social D, Black Keys, Eagles of Death Metal or 16 Horsepower is going to enjoy his minor-key mania. Check out Bates’s sounds from the troupe’s most recent album, Take Your Medicine , at bigjohnbates.com.

The last year this garage sound with pasty-wearing shakers has canoodled around the globe, covering Europe, Western Canada and, after the Whistler show, the U.S. This year’s credits build on the more than 450 shows in 13 countries the group has clocked, including headlining Alberta's 29th North Country Fair and rocking out to 4,000-plus crowds. Between headlining summer festivals in 2007, including the NXNE in Toronto, and NHRA Drag Races in the Midwest, there is no rest for this wicked group. Bates and company struggle to find time for the band’s next recording.

“It will be garage blues again,” he said of the new album looming on the horizon. “Slightly different with songs having more melody. The next album will be more refined. We want to make every note count. We’ve been taking a couple of new songs with us on the road to see how people relate to them.”

Big John Bates’s biggest fan base rests in western Canada and Germany. Japan is soon to be added to the list with the success of the band’s recent DVD, called Live at the Voodoo Ball , filmed from a show at Richards on Richards in Vancouver.

“We’ve got no label pushing us into the spotlight,” he said. “But if you play an area enough, people come out in droves to see us. We are fairly unique. There aren’t a lot of shows out there doing what we are doing.”