Not your regular rap

Australian hip hop trio, Hilltop Hoods, step their game up on latest full-length, State of the Art
Feb 5, 2010 8:07 AM By: Holly Fraughton 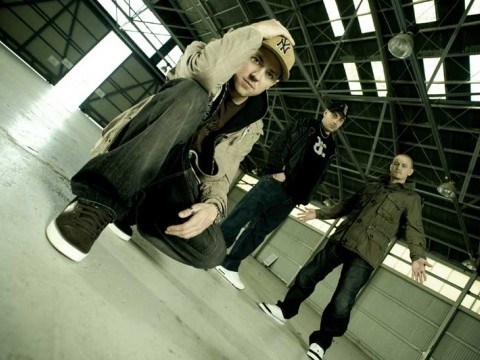 These days, the genre of hip hop tends to conjure up mental images of bitches and bling, fast cars, mansions and a generally lavish lifestyle. But let's face it - that's not what it's all about for all rappers, at least not for the Hilltop Hoods.

MCs Suffa (Matt Lambert) and Pressure (Daniel Smith), and DJ Debris (Barry Francis) are the men behind the music of the Hoods, all key figures on the Australian hip hop scene, which has grown in leaps and bounds in recent years. But when the Hoods started out, it was in its infancy, and their goal wasn't to get on top of the game.

"It was about us bludging school and stealing liquor from our parents' liquor cabinets and getting drunk and having fun," Smith laughed. "And it kind of evolved from there."

Suffa and Pressure met up in a high school in the hills of Adelaide, South Australia, and later were introduced to DJ Debris. The three were friends first, united by a shared love of hip hop culture.

"I guess it's the friendship the three of us has that bonds us closely, as well as our love of music," he said. "I think it's a good foundation to have as a group."

Today, the group is considered by many to be a driving and defining force in the industry.

"It was always a hobby for us - it was fun, it was just a passion that we had. It was something we did because we enjoyed doing it."

The Hoods didn't actually start making a living off their music until 2003 when their album, The Calling , finally blew up on the radio.

Since then, their full-length efforts have been met with critical acclaim from the industry. One of their more recent releases, The Hard Road: Restrung , was a labour of love that forced the Hoods back into the studio to tweak all of the tracks from The Hard Road so they could be accompanied by the Adelaide Symphony Orchestra.

"We recreated the album with a 32-piece orchestra, which was quite a challenge," Smith said. "It was something very different for us. Normally, our music is very kind of old school, sample-driven hip hop. So to work with a symphony orchestra was an amazing experience."

What started out as a simple remix project turned out to be a lengthy and tedious task, as the artists ran into serious issues with tuning their tracks, ultimately pitch shifting all of their music to work with the orchestra's piano.

"When we first tried to do it, everything was out of tune and sounded awful, and it got to this point during the project where we just went, 'fuck, this just isn't going to work!'" he recalled. "We almost gave it in, but then we figured out a few ways around it after six months."

The Hard Road: Restrung was a tough act to follow. But they seem to have hit the mark with their fifth studio album, State of the Art . It features an impressive range of tracks - some dark, some funny - but above all, their message is honest and inspired by life. And that's what it boils down to: these guys are dead set on representing life honestly. The name of the game for these avid hip hop lovers is quite simply to make music that they would enjoy listening to.

But it hasn't been easy to stay independent in today's industry. Over the years, they've turned down tempting offers from major labels, opting instead to stay true to their roots with the indie Australian hip-hop label Obese Records.

" The Hard Road title was about our musical career - it wasn't really about our upbringing as kids or anything like that," Smith explained. "The title was more about us doing the right thing with our careers and taking the long route to do it properly rather than the short, easy option."

On State of the Art , the Hoods decided to take a different approach, again.

"We wanted to get back to our original format of sample-driven hip hop, but we kind of took a lot of elements from the remix project and the album before that," he said.

They chose to incorporate different elements into their music, creating a fuller, more robust sound and feel with string quartets and other instrumental elements featured on the pared down 12-track list. All told, Smith describes the end product as their "most consistent piece."

"I think lyrically, it's probably a bit more confronting and darker, as well," Smith said.

The album has been met with an overwhelmingly positive response from fans, many of whom actually expressed skepticism before the album was released.

"A lot of them expected us to release some commercial rubbish, and they sort of said that to us in e-mails or in forums," he chuckled.

Aside from their ambitious studio projects, the Hoods have also been hitting the road, hard. This past fall, they toured with East Coast Canadian hip hop artist, Classified, performing in clubs in Vancouver, Calgary, Edmonton, Saskatoon, Winnipeg, Ottawa and Toronto.

"It was amazing, actually, to be able to go around Canada with an artist like Classified, who's starting to get pretty big there, I believe!" Smith said.

So far, the Canadian hip hop scene has been very receptive to the Australian trio's distinct style and sound.

"We got really positive reception everywhere we went; most of the heads in the crowd hadn't heard us or heard of us before, I don't think, but it went down really well and the shows are selling really well this tour, so we must have made a good impression on a few people."

Next up, they're heading out on another scaled-down Canadian tour, this time as headliners, starting right here in Whistler and hitting stops as far east as Ottawa and Toronto.

"Being as it's winter, it's a fantastic excuse to go snowboarding," Smith chuckled.