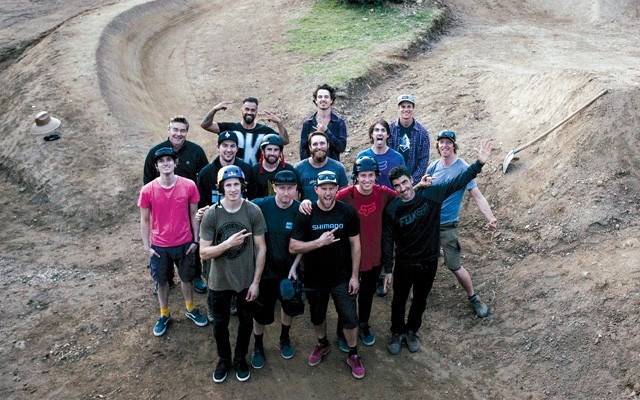 NOT2BAD AT ALL Cast and crew from Anthill Films' latest offering stand still for a photo. Photo submitted

Here's a hint if you ever want to work with busy world-class mountain bike athletes — call them in February and mention a diversity of riding.

"You can't do a film just anywhere at any time because these guys are so busy. Plus there are not that many places in the world where there is good mountain biking at that time of year."

Dunn had already made the short film NotBad: 30 days of tomfoolery in New Zealand, pulling together seven riders hitting the trails hard and indulging in antics that can only be called bonkers.

"It's really hard to get everyone together, we realized the only way to complete the film would be if we had all of our logistics lined up and have everyone there for a long and intense shoot all at once," Dunn says.

Unsurprisingly, NotBad proved popular, so Dunn and producer Darcy Wittenburg lined up for round two.

Dunn recalls: "The first film we shot turned out to be really successful and was fun to make, so we did it again. We joked that if we did it again it was not going to be too bad."

Not2Bad had its world premiere earlier this month in Vancouver, and will be screened in Whistler during Crankworx at a ride-in theatre night at Lost Lake on Aug. 20.

Anthill Films started out eight years ago, when Wittenburg says there were fewer local companies and they wanted to look at the big picture.

"Our outlook was global. The whole idea was to make films that capture how we saw mountain biking. It was that simple," he says.

"And I don't think it has really changed much, either. It is cool having all these filmmakers here; it's inspirational if you see what someone else is doing. It pushes you a little bit."

The narrative comes from the style of film they decide to make, choosing the tone and the general concept of what they want to say. From there, says Dunn, they layer in the locations, timing and the riders.

"With this one, we wanted to connect with the Spanish riding scene as well. It became important," Dunn says.

"Not2Bad is a sharp contrast to our last film Unreal, which was a two-year project and had a much higher budget."

Planning was key, says Wittenberg."We found out what we could pull off in 30 days. Unreal was much more scripted. It's cool because we get pushed into a more complex operation, Not2Bad had around 25 people on it and we pulled off a fairly complex shoot," he says.

But they'll be back for round three, they hope — time to contemplate Not3Bad.