Of John Coltrane and Kenny G... 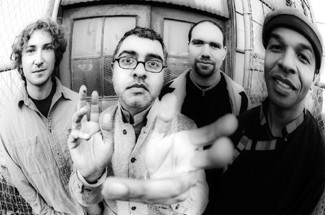 Enigmatic jam band Garaj Mahal is popping up in Whistler for a pair of shows next weekend – their first visit back since last New Year’s Eve.

With their expert individual musicianship and astounding, almost telepathic cohesiveness as an improvisational quartet, the band has a dedicated corps of local fans. Many will be wondering how many more gigs they will see in the intimate Boot Pub, which is slated for redevelopment.

On the eve of their current tour up the West Coast from California through the Pacific Northwest to Vancouver and ending here in Whistler, Pique entertainment writer

Shelley Arnusch caught up with bass player Kai Eckhardt, who talked politics, all night recording sessions and playing to the point of hyperventilation.

Just another day in the Garaj...

Since you were here last New Year’s, I need to make sure the band is still together. No big fights or band-breaking dramas?

We’re going strong but we just took a six-week break. We all did side projects and other projects. I went to Europe and worked with a jazz trio. Fareed worked with the Fareed Haque Group, the band he had even before Garaj Mahal. Alan Hertz worked a lot with Bobby Vega, the bass player that used to play with Jefferson Starship. Eric Levy was working with his band Eric Levy’s Love Lounge. Everyone was off doing our own thing.

: Is that the secret of your cohesiveness? That you take these breaks and do your own thing?

It’s more of a necessity because we have different circumstances. Fareed and I both have children. We have a certain economic bottom line. Before we formed Garaj Mahal we all had our connections in Europe, teaching, studio gigs. We have to take time off to honour those connections or else they die. Garaj Mahal ends up being the only breadwinner and it’s comparable to a monoculture in agriculture. If you only have one type of tree in a forest and there is a parasite it will take everything down. But if there is diversity then you have stronger trees. Diversity makes life strong. One-sided-ness weakens.

It’s a philosophical point of view but what it boils down to is that we have to keep a balance between being together as a band and doing our own thing. Where that balance lies has to be negotiated from year to year. Garaj Mahal right now is still everyone’s priority because it’s growing and doing better and getting publicity all over the U.S. Next year it looks like we’re going to make the international leap over to Europe.

: It’s an advantage then that you and the other members have maintained your European connections.

What we’ve discovered is that people do remember. Even if it’s 10 years back, if people come to a show that really moves them, they’ll remember. That’s the beautiful thing about our profession. The best publicity that we can come up with is to really deliver and to provide an evening where everyone says: "I’m glad I came. This was time well spent." This is what we hope to achieve and we hope to do this again when we come back to Canada.

: I would say you’ve achieved that in Whistler. People talk about and anticipate your shows. What do you think made the connection for the band with the Whistler audience?

We just love Canada. We love Canada on many levels and of course Whistler is stunning in terms of location. The people are friendly. There’s a certain kind of "looseness" in Canada that we like – looseness combined with being politically and socially aware and awake. Right now, all of us in Garaj Mahal have to agree that we’re not happy with the way the United States government is leading the country and where things are going. We always look to Canada as a place that’s holding its own. It’s a little bit of a sanctuary when we come over there.

There’s the loyalty of the Upstream Entertainment people, bringing us over and continually delivering. We always stay at the Shoestring Lodge and it’s always nice if we have more than one day in a place. We get to rehearse during the day. We can socialize. We can be human. That’s why we always look forward to coming there again.

: Are you aware Boot and the Shoestring have been bought and will likely be torn down?

We heard. We actually thought our last gig was the last gig, so we’re excited the time has been expanded a little bit. The Boot is a funky little room because it has a lot of wood inside and a wooden room usually sounds good for the type of music we play. Glass, stone, metal – it hurts the ears. The frequencies bounce off the walls too hard. Wood absorbs. I just hope we can find a place where we can continue this. That it’s not dependent on that one place that we come to Whistler.

: The last time you were here you were just getting ready to release the album Mondo Garaj. Where’s Garaj Mahal going now?

If you think of the history of our music, the "jam band," where musicians improvise live in front of an audience, that goes back to Miles Davis, the album Bitches Brew with John McLaughlin on guitar...

Looking at the scene around us there’s not much going on in that direction. Fusion is a style that disappeared because it became too individualized and egocentric. Musicians can get so self-absorbed they lose the audience.

: Do you think alienating the audience musically is a potential problem for Garaj Mahal?

Let’s just say there’s a danger for that to happen.

There are, of course, a few hardcore music lovers that put on their headphones, get their glass of wine, sit down, and just tune in and trance out. Or the ones that go to shows and open their hearts to what’s going on. John Coltrane has the ability to provide someone with a spiritual revelation. Kenny G has the ability to soothe somebody and make someone feel comfortable in the space they’re in. It’s different music for different functions.

With Garaj Mahal we’re walking on that tightrope right now. We have access to the dance crowd. We love dance music. And we can also go for it and reveal our inner spiritual struggle in front of people, almost to the degree that it’s scary. We feel that energy when it gets really intense and we’re feeling that all four of us are really making it count. Sometimes we actually hyperventilate or our hearts start to skip. There’s a lot of intense energy that comes through and it’s very valuable. But it’s also like a very strong potion. You can O.D. on it and you have to watch out and use it sparsely.

In a way we’re experimenting with that right now. My goal is to be the next generation of musician that can balance this energy by also acknowledging the other side – the ambient side – to also be proficient at that. Why not have a song that leads you through different areas, like a suite? A song that starts ambient and goes into something very intense and comes back down? It requires the discipline of the musicians to have the tools and the power but not to use it when it’s not appropriate.

It’s hard because when you’re in the heat of things it’s like having an intense conversation with someone and then going back to smalltalk. You kind of need to resolve things. It’s like a person who goes to the mountaintop and proclaims, and then also puts the baby to sleep at the end of the evening. I want to be able to do that in this lifetime.

We just got out of the studio in Washington D.C. where we recorded the new Garaj Mahal record. It’s going to be amazing. It’s a few levels up from what we’ve done so far. We locked ourselves in this room for over a week and we slept in that room and we worked in that room around the clock. We saw the sun come up every day. We’re getting ready to release it next spring.

: Will you be playing the new material on the upcoming tour?

Yes, all of our latest compositions. And we’re always writing so we’ll probably have new stuff that is not on any record yet. That’s cool, you know? We have to keep moving.

Tickets to Garaj Mahal are available through TicketMaster, the Boot Pub and at www.upstreamentertainment.com. For more info call 604-932-3338.