Mike “Armadillo Slim” Armitage of Animal Nation fame to be featured on pilot reality show
Jan 18, 2008 8:38 AM By: Nicole Fitzgerald 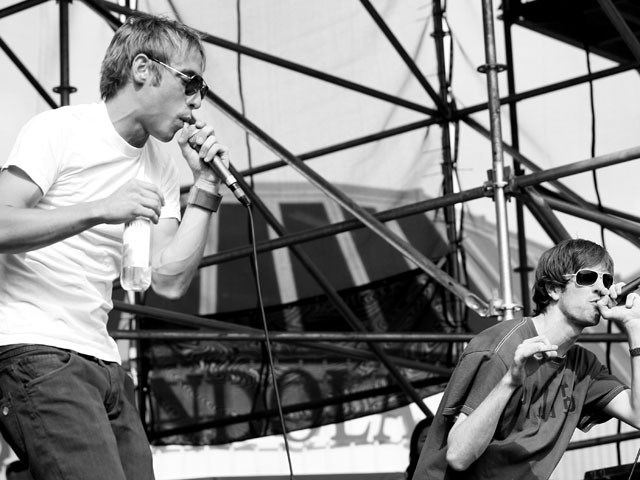 Mike “Armadillo Slim” Armitage is most famous for his wordplay wizardry exercised in the local hip-hop duo, Animal Nation. However, his slightly cheesier identity will come to light as camera crews for the pilot reality television show, Peak Seasons, follow the young Whistlerite around town.

“They want to shoot me at the Bearfoot,” Armitage said of his day job where he works as the cheese trolley expert. “It’s not easy being cheesy.”

Cameras will first get rolling on the tongue and cheek recording artist Wednesday, Jan. 23 when Animal Nation opens for legendary hip hoppers Mr. Lif and Akrobatik of The Perceptionists at the Garibaldi Lift Company (GLC).

The “docusoap” pilot produced by Vancouver-based Free Form Productions will follow in the tracks of popularized reality television shows such as The Hills and Laguna Beach. Peak Seasons will focus on eight to 20 young adults between the ages of 18 and 25 going about their life in Whistler from athletes training on the mountains to recording artists ramping up Whistler’s infamous nightlife.

Armitage, with his other hip hop half Steige “Tall Man” Turner, of Animal Nation are no strangers to stoking up the dance floor. The two will fire up the crowds with music from their latest album, Time Zone, released on Rallytime Records, as part of the hip-hop night.

Since opening for Canadian legend Buck 65 at the Telus World Ski and Snowboard Festival last April, Armitage and Turner have been hard at work penning new music building on their poetic rollings about life, imagination and burnt lasagna. The two recently returned from a small tour of Europe with shows in Germany and Denmark, and they are producing beats for the soundtrack of Community Now, a Celebration 2010 documentary. They hope to gain additional exposure through the reality show.

“It’s a good opportunity for us to promote our music,” Armitage said. “Besides, it will be funny to be on the other end of a reality show.”

He recently visited his brother and sister who are working on the crew side of reality television in New York.

Local beats will turn to international ones with what Entertainment Weekly calls “One of alt-hip hops hottest commodities.”

Hot off of last year’s smash success with the Perceptionists, MC Mr. Lif is back with an arsenal of new rhymes that showcase his talents as an MC, poet and true life reporter. The Boston-bred artist gets both personal and political on his latest album Mo’ Mega released on Definitive Jux . Combing political consciousness with no-holds-bar aggressive lyrics is the secret to Akrobatik’s success as well. The fellow Bostoner is also hard at work with a new album Absolute Value set for release later this year on Fat Beats Records.

Come out for an incredible night of hip hop while also showing support to Whistler’s number one hip-hop crew.