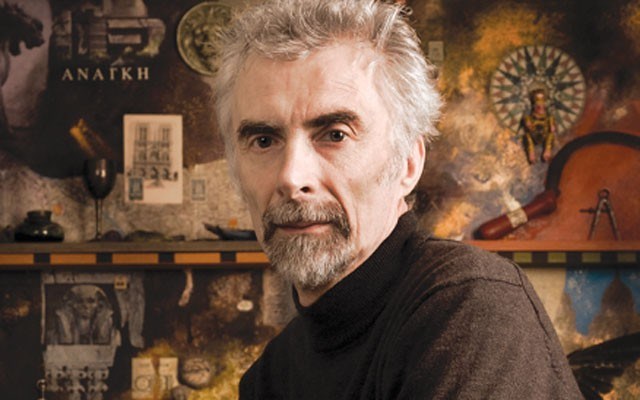 To the letter Nick Bantock, author of the Griffin & Sabine series, is at this year's Whistler Writers Festival. PHOTO submitted

The epistolary novel Griffin & Sabine: An Extraordinary Correspondence came out in 1991 when I was still living in London.

That book was everywhere, in shop window displays, in full-page newspaper ads and even (I seem to recall) displayed in bus shelters and the London Underground.

A love story told as a series of letters between two soul mates, it took the fantasy to a whole new level by being published as an artistic scrapbook, with envelopes hiding removable letters and postcards between Griffin Moss, a lonely artist living in the U.K., and Sabine Strohem, a woman he has never met.

It reminds us what has been lost in terms of the potential of snail mail.

The story unfolded not only with words but also with beautifully drawn visions — and it became an international bestselling hit for its author and artist, Nick Bantock, and led to a book series on the geographically challenged lovers.

"I grew up in London and I knew the places I was writing about," explains Bantock, who moved to British Columbia from Britain in the mid-1980s. He now lives in Victoria.

"You could describe the first book as a gestalt therapy dialogue, even to the extent where I had different pens and different writing styles for each character. I actually sat in different chairs; when I first started to do it, I did that actively."

Bantock adds: "I wasn't a writer, so I had to find a way to do it. I did know about psychotherapy, so it seemed obvious to me that if I was going to play those two different characters out, two internalized characters, then I had to do it practically. Whether I was sitting in two different chairs, with two different pens, or whether I was walking around the room, that's how those voices came out."

He recognized that the art was a big attraction and also helped him tap into who Griffin and Sabine actually were.

"The artists I've always admired have been willing to move around and not be trapped in one specific genre because it makes them easy to sell in the galleries, but those people who had the courage. People like (late American pop artist Robert) Rauchenberg, who would wake up each day and be who they were that day."

And interestingly, Bantock's original artwork from the Griffin & Sabine series and his other books is available for sale on etsy.com (Bantockart).

"It joins the two trilogies together, or you could say it is fourth book in the first trilogy," Bantock says.

"From my perspective, when I started looking at what was missing, it certainly wasn't another book — but a lot of the things I assumed that people understood both visually and in terms of narrative, bit by bit I realized it was a little more obscure than I first thought, mainly because I was living it.

"When I sat down and started Pharos Gate it just flowed out."

He explains that when this happens he tries to let it pour out and not rein it back in.

"I'm very lucky. The images suggest words for me and the words suggest images. I allow myself to be present, wherever my enthusiasm is, instead of bullying myself into doing something. I feel as though I am the culvert through which it passes."

Asked what he learned about himself when it came to a story about unfulfilled longing, Bantock pulls up the Welsh word "hiraeth."

"It essentially means the sense of loss or grief for an experience that you've never actually had, or a memory that has never occurred, or a person. For me, it was pulling back the veil on that," he says.

"The journey of Griffin and Sabine was me coming to terms with myself in every sense of my opposites."

Bantock is taking part in the Literary Cabaret reading event at the Whistler Writers Festival on Friday, Oct. 14, at 8 p.m. Tickets are $22 and can be purchased at www.whistlerwritersfest.com.

The winners of the Whistler Independent Book Awards for fiction, non-fiction and crime fiction will also be announced.