Ozomatli keeps it fresh after 22 years 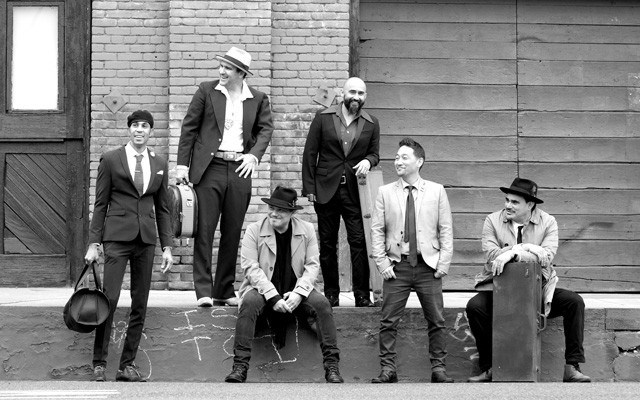 latin beats Ozomatli is set to rock the World Ski and Snowboard Festival mainstage in Skier's Plaza in the afternoon and Buffalo Bills in the evening on April 16. PHOTO by cynthia perez

They're on tour with the Squirrel Nut Zippers heading to a gig in Salt Lake City when Ozomatli guitarist Raúl Pacheco takes some time to talk with Pique in advance of their performance at the World Ski and Snowboard Festival on April 16.

But the group, which blends Latin, hip hop and rock with any number of other styles, has highlighted its activist roots since the November election of Donald Trump as the American president, Pacheco explains. Ozomatli has played a number of events supporting the resistance to Trump and his power, taking a stance the group has adopted through its 22-year career.

"We started that way, we started out of a labour protest. The scenes for us have always been music and doing the things we can do to support (others)," he says. "The current administration brings perspective to this. There are a lot of people all over the country and even all over the world saying that they disagree.

"When we speak or play, we're definitely throwing our support for our core message, one of inclusion... We welcome all the differences that there are in the world."

Though attacks, both physical and legislative, on people of colour since Trump's election have been well documented, Pacheco says the biggest changes he's noticed since Nov. 8 have been how these people and their allies have banded together to serve one another.

"There's a heightened sense of community. There's more awareness and there are groups of people that are heightening communication and information being shared about how to deal with many of these things, anything from immigration raids, what it means to be a student here from overseas, or what it means to have a parent who's undocumented," he says. "There are a lot of organizations with people who are a lot more in touch and who are really looking out for one another."

On the musical side of the ledger, Pacheco says Ozomatli fans may find a slightly different sound than the last time the band was in town, as it will be playing tunes off its new album, Non-Stop: Mexico to Jamaica. The record is a selection of 14 Mexican classics, but done in a reggae style.

"We were looking to make a new record and then Justin (Porée), our percussionist and MC came up with this idea to do a covers record, which we've never done. Anytime we've tried to do them, we've always had some issues with them," he says. "We had an idea of doing a bunch of different eras, old and new, of popular Mexican songs and putting them in a reggae style. We got the opportunity to work with (reggae producers) Sly and Robbie so that made a big difference for us. It made the reggae that much more special and authentic.

"We know we're not from Jamaica but, as with any type of style that we reference, we try to give it as much honour as we can musically. Ultimately, we want it to feel good and I think that's what's most important," Pacheco adds.

Pacheco explains the album originally started with 22 songs that the band pared down to a more manageable number. Though the band has had its challenges putting their own spin on the music of others on this large a scale in the past, Pacheco has enjoyed the process of crafting the sets and seeing fans' reactions.

"It's been fun to learn these songs in a different way, taking songs that people really love and know and seeing their reactions when we play them," he says. "A lot of it was just choosing which ones we think that were cool.

"We would play on them and then take all these ideas and combine them."

Ozomatli will play in Whistler Village as part of the FIDO Outdoor Concert Series at 3:30 p.m. on April 16 before rocking Buffalo Bills as part of the Kokanee Freeride Club Series later that evening.

"It's definitely a mellow vibe," he says. "We do love the high-energy (feeling) and what we've been doing is not taking full songs, but we'll take large sections.

"We're trying to give people a taste of what we're doing. It's been cool and I think that's been a good solution."