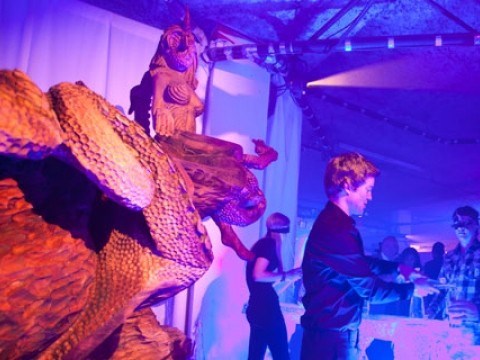 Cornucopia is done but one of the key participants in the weekend wants to ensure the fun enjoyed in 2011 is remembered well into the future - through art.

With that in mind Masquerave founder and Bearfoot Bistro owner Andre St. Jacques, wants to donate a sculpture from the event to the community. Described as an octopus eating a mermaid, the commissioned piece was on display near the entrance to Masquerave event.

According to Marc Des Rosiers of the Bearfoot Bistro, the production company teamed up with the Masquerave organizers and charitable organization One Drop to create the art piece.

Foltz does much of his work with wood and ice. His works include animal carvings, mermaids, benches and marine themed pieces.

Buck Productions reported in a news release that the show Foltz is currently working with will take viewers through the time constraints, pressure, and extreme artistry of chainsaw carving.

St. Jacques said Foltz was asked to come up with something representing water. The water theme comes from St. Jacque's commitment to raising $100,000 for One Drop.

"Ideally there will be a water fountain next to the statue."

To date, One Drop has taken on water projects in El Salvador, Honduras, Haiti, Nicaragua and India.

The organization also promotes World Water Day on March 22 every year. Close to one billion people around the world don't have access to safe water and World Water Day aims to draw attention to that fact.

The Resort Municipality of Whistler is aware of the donation from One Drop and St. Jacques but the public art committee hasn't had a chance to consider the future of the sculpture yet.