Research for Freya North's latest novel The Turning Point led to her setting it in Sea to Sky country
Aug 19, 2015 6:00 PM By: Cathryn Atkinson 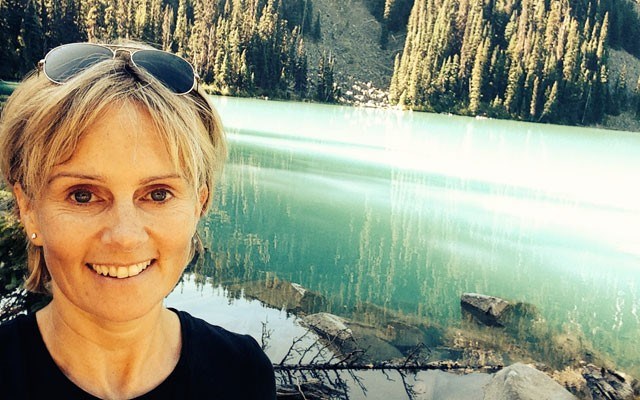 The cover of multi-million-selling British novelist Freya North's latest book is unmistakeable to those of us who know and love Pemberton.

It's the boardwalk that snakes through the waters of One Mile Lake on the outskirts of the village, which sits in an idyllic valley beyond a mountain pass 30 kilometres north of Whistler.

North herself took the photo as she carried out research for her 14th novel The Turning Point.

The book was released to acclaim in the U.K. earlier this year; it came out in Canada last week.

"It has had such a lovely response in the U.K. The readers' responses have moved me a lot because they have embraced the book," North says in a phone interview from London.

"It will be lovely to speak to the Canadian side now."

The Turning Point is the story of a long distance love affair between Frankie, a children's writer in England, and Scott, a musician and film score composer in Pemberton. The pair meet in England and Frankie follows Scott to Canada — it's about taking risks in love and seizing happiness.

"I wanted to explore the dynamic of two slightly older people who meet each other, feel that connection, and wonder how they can make it work after a long time of being on their own. It was a really interesting journey," North says.

So why Pemberton? Did she get an atlas out, close her eyes and hit it with her index finger?

For North, a popular fiction writer with sales well over two million, it came down to a stubborn Canadian dude.

"I had never been to Canada. I have no links with the country at all, but the character of Scott was resolutely Canadian. I get very, very close to my characters and had a conversation with this character before I started the book, telling him that it would help me if he were Californian. I had just done a road trip in California," she laughs.

For the story, she needed him to live several hours away from Vancouver in stunning landscape ("Landscape is truly a character"), so she went to her local library in Hertfordshire.

"I asked the librarian is she had a road map of Canada, and she said 'Sure!' and out came this map," North says. "I had a good look at it and as soon as I saw that Highway 99 is known as the Sea to Sky Highway, I thought it was so poetic."

Being the sort of writer who researches heavily and augments it with firsthand exploration, a trip to this region was next on the cards.

"I knew I needed to come out to a country I had never visited before, and that was going to present problems," she says.

North, a single parent of a 12-year-old and 14-year old, had never left her children for any great length of time before, but her parents stepped in at short notice and she was able to organize her trip in just five days. She flew out for two weeks last September.

"It felt quite queer for me to be stepping on that plane, and in the book I enable Frankie to confront a similar emotion. It was so vivid for me and I hadn't experienced anything like that," she says.

But the uncertainty of going into the unknown, like her characters, was soon replaced with something more joyful. The book was already underway when Pemberton was selected, but changed completely because of the trip.

"I arrived and I had the most amazing time. What a place. My senses were on high alert. So whether I was eating a garbanzo wrap at Mile One Restaurant or getting coffee from Mount Currie Coffee Company or if I was scrambling up the high lake at Joffre, everything was attuned," North says.

"I needed to put the verisimilitude, the authenticity, and the flavour into it and to be able give my British readers a taste for a place. As luck would have it, things started to fall into place nicely."

North stayed at the Lillooet River Lodge and as her hostess was connected to the local writing community, she was able to get help looking for locations that could translate onto the pages of The Turning Point, including the all-important home of her hero, Scott.

"And bless her, she took me around to six or seven places. She'd say under her breath to me, 'Is this it?' And I'd say, 'It's beautiful, but not quite!' I had these images in my mind's eye of the view from his porch and the approach."

She made trips on her own to spots in the region, including the nearby Joffre Lakes.

"I put a video selfie of that hike on my website, and I'm slightly hyper and breathless because I had never, ever seen a place like it," North says.

She also had an obligatory encounter with a black bear at a time of year when they would be feeding heavily in preparation for hibernation.

"The bear basically walked (across) the street and there was that moment when it just glanced at me and I glanced it and it kept moving. If you're a British girl, you've only seen bears like Paddington and Winnie-the-Pooh! I would say it was probably the closest I've gotten to a religious experience, it was fantastic."

Another experience North could not have had unless she had been physically in the region was a meeting with elders from the Lil'wat Nation. Trips to the Museum of Anthropology in Vancouver and the Squamish Lil'wat Cultural Centre in Whistler allowed her to research indigenous communities.

"This is why the book is so important to me. Had I not made that trip, a character called Aaron, who is a Lil'wat man and Scott's childhood best friend, would not be in the book," North explains.

"Here in the U.K., we know nothing about Canada's First Nations and it was of phenomenal importance to me, during my trip, that I really embraced that culture and heritage, history and language."

As well, North was able to speak to Lil'wat elders, who offered advice.

"I passed by everything I wrote (to them) and I had to meet their protocol. Six people read my work," North says.

"Mine is a work of fiction but I really wanted their go-ahead and I was so proud when it came through. They really seemed to embrace the way that I had woven their story into the story of Frankie and Scott."

North took this commitment to authenticity in the book seriously, using traditional spellings of the Lil'wat language, which involves accents and glottal stops not used in English.

"Research, to me, is both a perk of my career, and absolute responsibility as an author. You owe it, not just to your readers, but to anyone who has a connections with what you are writing about," she says.

That said, North came up against British ignorance of Canada, including interviewers who described The Turning Point as being set in the Rocky Mountains or that Canada is a boring country.

"That kind of stereotyping, I cannot figure out where it comes from. All the people I met and many of whom I now consider friends, they were so sensitive and cultured, aware of so much. I loved it. If the opportunity arose to move to British Columbia, I would absolutely do it," North says.

"What I found was a rural community that marries gorgeous places to eat, lots of lovely, healthy things to do. Nothing is compromised and they make it work."

But North's work has been stereotyped itself, a published author of popular fiction since 1996, she was thrown into the genre of Chick Lit, something she fiercely objects to.

"Chick Lit is something I've never written. I believe it is a pejorative term probably invented by a journalist with a bee in their bonnet. In the '90s there were a spate of books following after Bridget Jones that were all about calorie counting, drinking chardonnay, smoking Marlboro Lights and shagging inappropriate men," she laughs. "I don't think in any of my books I have mentioned the words 'Chardonnay' or 'calories.'"