The move comes after Chief Dean Nelson called for cultural items to be returned last January
Dec 5, 2019 6:00 AM By: Alyssa Noel 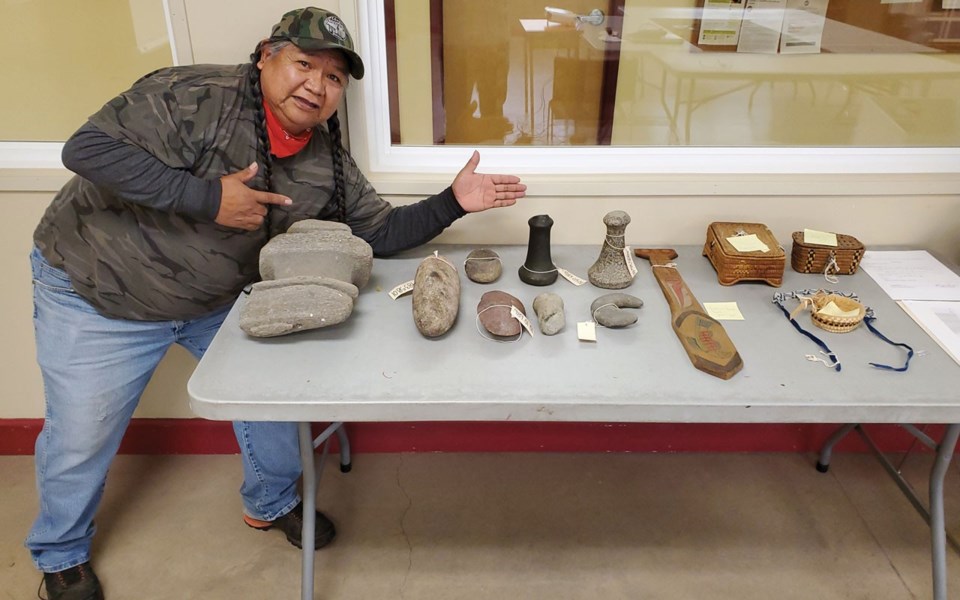 Johnny Jones with the Lil’wat Nation’s Lands and Resources office poses with items repatriated from the Pemberton Museum. Photo submitted

The Pemberton Museum is repatriating the Lil'wat Nation cultural items in its collection.

Last January, Lil'wat Political Chief Dean Nelson issued a press release calling for anyone with the nation's historical cultural possessions to return them, citing the United Nations Declaration on the Rights of Indigenous People.

Pique published a story about his request ("Bringing Culture Home," May 5, 2019), and while the museum took note of the article, in a newsletter, they said they had been anticipating the request—not just from Lil'wat, but also from all the Stl'atl'imx Nation.

"In the spirit of the original museum founders we recognize that the time has come for repatriation and we support the nation's goal to have cultural belongings returned to the St'atl'imx Nation for families to identify with and to provide opportunities to embrace and celebrate their cultural history," it reads.

Currently, seven items have been returned, including stone pieces and baskets, Nelson says. But many more are set to come in the near future.

"It's amazing that there are some people wanting to do this, seeing the value in it," he says. "It's a very enlightening feeling."

Last summer, the museum received funding from Young Canada Works through the Canadian Museums Association (CMA) to hire a summer student to research all the Indigenous items in its collection, determine their origins, create condition reports, and post them on the museum website, said Niki Madigan, curator of the museum, in an email.

"Lukas Joe was hired to complete this work in late June and researched over 25 items by mid-September," she writes. "Jessica Hill (a PSS student) assisted me with the remainder through the fall and we completed research for 64 items in [the] collection. There was a request from the nation at the last regular meeting (Nov. 20) to repatriate the Lil'wat archaeological items and the board moved to do so."

In the meantime, they found seven items with no documentation that have since been identified as Lil'wat. Johnny Jones with the Lil'wat Lands and Resources office, and Allison Pascal from the Squamish Lil'wat Cultural Centre (SLCC), assisted with that research, Madigan adds.

"This is the beginning of the Pemberton Museum's repatriation journey as there are still items of Lil'wat and other nations in the collection, but we are finally in a position to enable this," she writes.

Meanwhile, Jones has already brought some clan symbols back to the nation, Nelson says.

"It's been amazing," he says. "It's all happened really fast."

Now they're working on designing spaces to display the objects on their territory. "T'szil [Learning Centre] building is designing some cabinets to house air-sensitive-type pieces ... We want to have a display at the Ullus Centre too," Nelson says.

"The museum supports Lil'wat Nation's priority to reclaim their cultural artifacts and will continue to collaborate with the nation to provide opportunities for their stories to be told in their own voice on the site—however that comes to be," Madigan writes. "We always direct visitors looking for more information to T'szil or the Lands and Resources department or the SLCC depending on the nature of the enquiry."

Recently, she completed a survey from the CMA in which she shared information about their repatriation efforts and asked whether the organization would consider funding to help other small museums with similar work.

The CMA released a second survey to its members shortly after to find out "how museums engage with and represent Indigenous history, culture, and artefacts."

"Repatriation and how museums interact with Indigenous peoples has been a topic in the museum community this year and I expect we'll see some more guidance and programs from Heritage Canada in the coming years," Madigan writes.

Nelson, meanwhile, remains optimistic that more items will be repatriated in the future. The Re-Use-It Centre has sent a note that they will be on the lookout for items and Curtis Collins, director of the Audain Art Museum, has also offered help through his contacts, Nelson says.

To see the online database of Indigenous items at the Pemberton Museum visit pembertonmuseum.org/collections/objects/.