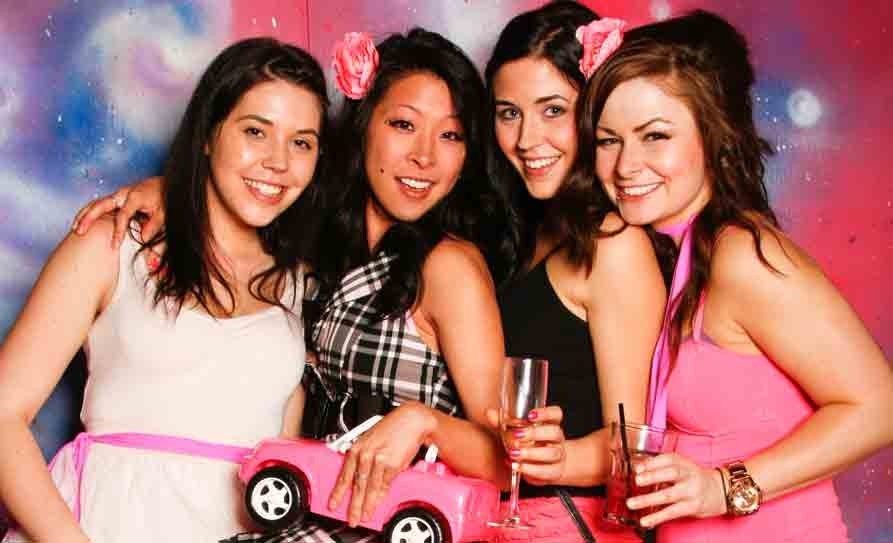 pink party The annual Pink Taco Party at the GLC will feature a photo booth again this year for party goers to capture the fun. Photo by Rich Glass

Boys, you better behave yourselves.

You kinda blew it a few years ago, what with your lack of pink clothing and general un-ladylike vibe. But this year, Sharai Rewels, organizer of the annual Pink Taco Party, has decided to let you back into the festivities — after midnight.

"But they have to be wearing at least one pink thing," Rewels says. "They can't just come traipsing in. They have to be in the spirit of the party."

This is her eighth year hosting the annual bash at the GLC, which originally started out as her all-girl birthday party, but quickly morphed into a sold-out event celebrating all things pink and girl power. "It's a really good excuse for a girls night out," she says. "There are so many male-oriented events (in Whistler) and the girls who live here are girls who get along with the guys. They're just as at home on the mountain high-fiving as they are in high heels having a cocktail."

Besides its mandatory pink dress code, the April 10 party caters to the Whistler gal's feminine side with manicures, massages and "attractive men circulating chocolates." This year, Awesome Arts Academy will be on hand to offer jujitsu demos — in pink costume — along with Tail Feathers Pole Dancing. And, of course, there will be the tacos, for which the event is named.

"There should be something for everybody there," Rewels says. "The idea is girls can come with their moms — it's 19 and over. It gets better every year."

This year, the DJ lineup for the night is also all-lady talent. Opening up the evening, as she's done every year — is Whistler's own Foxy Moron (a.k.a. Ace Mackay-Smith). MC Crystal Precious, a "strip hopper" from Vancouver, is also the roster.

"She's part of the Sweet Soul Burlesque group," Rewels says. "She's so inspirational. She's just a larger-than-life personality. She's a really curvy girl and she, to me, embodies being comfortable in your own skin and teaching other girls how to be better at that. She's just a really cool person. I really look up to her."

Calgary's Mama Miche of the DJ duo Bitchin' will also play a set, along with headliner Blondtron, from Vancouver. "She's hilarious. She'll get up in the middle of her DJ set and booty dance and run out into the dance floor. She's a really intelligent girl and likes to prove her point that she can make it in the guy's DJ world," Rewels says.

Other activities packed into the night: a photo booth, a "prize blitz" from local businesses and shopping stalls.

Be sure to get the $25 tickets early because the event sells out every year, Rewels adds. And, of course, don't forget to don your pink. "Some girls are still uncomfortable with the colour," she says. "There are a lot of girls here who are not prone to wearing pink. I think I'm one of them. But this is an opportunity to have that singularity in the room. To have that theme throughout is very cool."