Whistler's newest duo will play their country-blues originals at the Crystal Lounge throughout May
May 2, 2013 12:00 AM By: Alyssa Noel 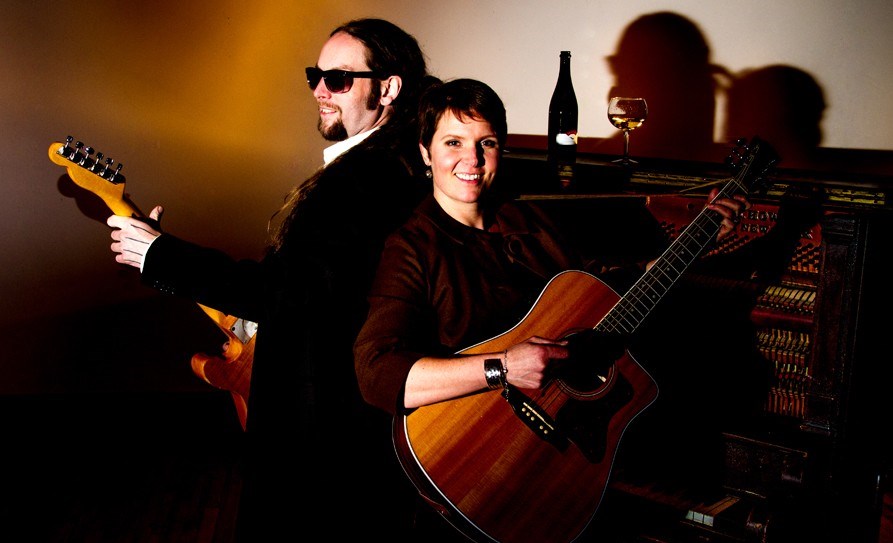 blues-country duo Whistler musicians Susan Holden and Sean Rose are set to introduce their duo, Poor Dirty Sylvia, to local crowds at the Crystal Lounge throughout May. Photo by adam taber, submitted

Singer Susan Holden and guitarist Sean Rose have been performing separately around Whistler for years, occasionally combining their talents on stage, though never in an official capacity.

It wasn't until Holden showed up at Rose's door with a country-blues song she had written called "The Devil Himself" that their duo, Poor Dirty Sylvia, began to take shape. Now, with several songs and a handful of shows under their belt, the pair are playing a residency every Thursday in May at the Crystal Lounge to test out material before they head into the studio to work on their debut EP.

Pique caught up with them to chat about their nascent project, country music and Whistler's music scene.

Pique: So you guys are working on releasing a four-song EP?

Susan Holden: That's our short-term goal and then we have some new stuff we will be playing at the Crystal over this coming month. It's going to take shape more by the end of the month.

Sean Rose: Which is part of the fun of doing the Crystal because it's going to be part of the process. We'll be playing and getting feedback from our friends and, who knows, possibly bringing up guest musicians on stage with us during that time. We'll be figuring out what we're going to do with the songs while we're doing them live almost.

Pique: How many original tracks do you have in total? I assume you'll be supplementing with some cover songs?

SH: The show will be split in three parts. There will be 10 original pieces that we'll do. A couple of them are songs a friend of mine wrote so we're trying to get her music out too. A couple are songs I recorded years ago just on my own then a few new ones then the four that are really solid. We're nitpicking on those before we go into the studio.

SR: As time goes on we'll have more originals than covers, but it's just like when I do my blues thing or when I go to see a blues show with any of the big names I want to hear their version of a Muddy Waters song as well. My introduction to playing country was with this guy Luke, he introduced me to some pretty badass country stuff — this one song in particular by Hank Williams, which is a mix of blues and country. To hear that and explain that to people, 'This is our roots, this is where we're coming from, this is our take on the classics.' I always want to throw in a few of those.

Pique: Where did the name come from?

SH: It's the name of the '69 Telecaster that Sean plays.

SH: He knows how to play it.

Pique: Were you concerned with people confusing you as a solo act?

SH: Well, we've already run into that, but it's a catchy name. It seems a little hardcore to me. It seems like kind of a cool name. Hopefully people will get used to it and it will be famous someday.

Pique: Where and when will you be recording?

SH: Bunker 7 Studios in Pemberton. We've hired a producer because we want to do this right. Irvine Russell is going to be producing this for us. The two of us are meeting with him Monday to get some more pre-production material done before we bring in Rajan (Das, bass) and Mike (Lunt, drums). If all goes well we hope to have a couple songs mastered by July and four songs by August. Then we'll look at another four.

SR: It's one of these things we're trying to make it good too. We're not going to rush too far into it.

SH: I'm going to do what it takes to get a vocal track I love, which I've never had in a recording, but I've also never had this much skill or experience or these songs. I wrote them, they're made for my voice.

SR: I'm excited about working with Irv too. I've only worked with him before when he's doing sound at shows. He's great to communicate with, no matter what the issue is.

SR: Fun! Basically, I'll come over to her place, we'll make some good food, drink some wine and talk about music. We don't put too much pressure on ourselves. We have a bite to eat, we have a drink, play some music and bounce some ideas off of each other then do it again in another day or two.

SH: As far as a checklist of the process, I generally have an idea of some melody or lyrics or theme or all of the above and come to Sean and we play it. Words change every time we're playing it. Verses change, the melody changes... they evolve. The harmonies are something that Sean comes up with.

SR: I started singing when I was really young. That's what I always wanted to do. I started playing guitar because my dad plays guitar and I wanted to have a background for my voice, really. I got right into that. I couldn't honestly tell you which one I love more. Just being able to add in harmonies, it's a great vocal exercise that a lot of people don't get to do... It's not always easy. Old country really lends itself to harmonies. You have to find them. It's not as much of a challenge as it is an exciting new thing.

Pique: For lyrical inspiration, you mentioned talking over ideas, but have there been any themes that have been coming up?

SH: Misery loves company. I was sad and broken up with and I was listening to Ray Charles, Janis Joplin, Patsy Cline. They're not Beyonce, like, 'Dude everything is in a box on the left, come get it. This is going to be the best break up ever. I'm done.' It's like, 'I'm pathetic. If you'll just come back and be with me. I don't care if it's right.' I went with that sentiment on the first couple songs. The first song is basically, 'I know you won't be mine. You've got other interests and you'll never be solely mine, just don't leave me alone tonight.' None of this came true by the way. (Laughs.) This wasn't about me at that point, it was this theme I was on. The other one is, 'There's no commitment. I don't want that either. Let's just do this tonight.' I think they're sexy, not romantic.

SR: They're heartfelt, but anyone can relate. It happens to be about her experiences, but I'm playing the guitar because I can relate. Anyone can. That's some of the stuff with music in general, emotions, relationships. If you're honest you know people are going to be like, 'Wait, me too actually.' You have to be honest with the blues and the old country stuff too. That's why people relate so well to it.