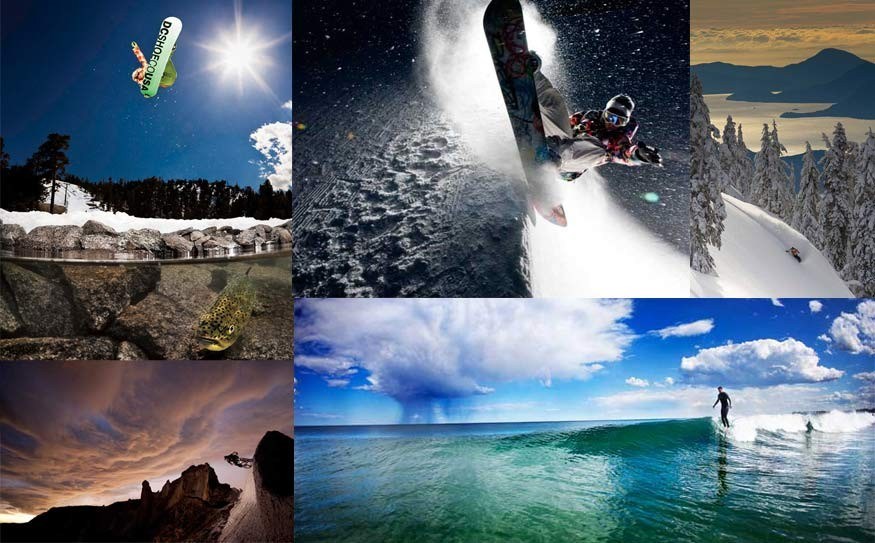 It's no secret that Whistler loves its action sport photography. The Olympus Pro Photo Showdown has been selling out consistently for years — including this year, when it sold out in only one week. This means that a whole lot of people reading this will want to go to this year's event on Thursday, April 19, and can't. That's a shame, it truly is. With this in mind, Pique is offering you a glimpse into the minds of this year's photographers, as well as a (very, very) small taste of the spectacular, awe-inspiring photographs that will make this year's edition so amazingly awesome and the greatest not-to-be-missed event that most of you will miss.

Photographers are busy people, you can understand, so we can forgive Adam Moran for not putting all his effort into his application slideshow for this year's event.

"I just kind of threw it out there thinking, 'Ah, maybe we'll see if this goes' or whatnot," the California-based photographer says. "And when I got the call saying that I was a finalist, it was kind of like, 'Aw man, now I have put a ton of work into a nine minute show. And it's the busiest time of year for me."

But naturally he wants to win this thing, so he's worked hard to narrow his slideshow down to his most impressive shots from the last five years for his first-ever appearance at the Pro Photo Showdown. He calls himself "a one-percenter" just for the privilege of being accepted in the first place. "I'd still be doing this if I wasn't getting paid," he says. "I'd still love to be out there snowboarding and I'd still like to be out there shooting photos."

This Squamish-based photographer has been shooting professionally for 12 years and this is the first time he's been named a finalist for the competition.

"The call made me super-stoked and went right into panic mode when I heard whom I was up (against)," he says. "It's going to be such a heavy night. Look at the talent of the people who are there. Just to be included in the list is next level for me."

He attended one of the early Pro Photo Showdown slideshows when it was held in the Crystal Lounge. He's been attending every year since moving to B.C.

"It's just a pretty amazing thing to have that much time to show that many of your images to a crowd who all wants to be there," he says. "There's nothing forced about it, you just get to show them what you want to show them and everybody's appreciative of it."

This is the busy season, you see. He's seemingly everywhere and anywhere in the world during the winter months. The Vancouver-based photographer is flying in from a shoot in Alaska specifically for the competition and flying back out the next morning.

So how does one as intrepid as he make time to even put together a slideshow of this kind?

"Planning ahead," he says. "I've been wanting to do this for years but it just never felt right. This year I decided that this was the year and I put a lot of the leg work together in the fall."

So not only is he extraordinarily talented, he's also supremely organized. On his hard drive, he has about 100,000 photos to go through, which he has now whittled down to 120 images that span his entire career, including on old skateboarding shot from '95. He says don't expect any photos of his that have graced Transworld Snowboarding magazine covers.

"You got'ta get away from blue sky and white snow and a guy jumping of a cliff," he says. "Everybody has shots like that and so you have to change it up."

Fact: she is the only contestant this year that is both from overseas and a woman. Another fact: she is also the most clearly excited to be taking part in this year's competition. It might have something to do with that first fact.

"I was totally surprised (to be picked)," she says. "You enter these things and obviously you hope to become a finalist or to win or whatever, but you never know with these competitions. You're going in blind, really."

The U.K.-born, New Zealand-based photographer says she's usually the only woman featured in competitions and action sport exhibits. It's the nature of an industry that is overwhelmingly dominated by men.

"(It's) definitely daunting," she said, especially given the demanding nature of action sport photography. She's had knee problems. She's had to hike for hours uphill. She's been terrified on several occasions but, as she says, "You always get there in the end."

The man loves his surf photography but the truth is, it doesn't pay. He's had to take up music photography to pay the bills. You know it's a miserable life when your portfolio is dominated by photos of Skrillex hanging out with The Doors.

"That's my pay cheque," he laughs. "There's no money in surfing or snowboarding."

And yet, he shoots surfing because he loves it. He brings the same dynamic energy to each of his subjects, whether it's a live concert or an avalanche. It's all that he can do to stimulate all aspects of the mind as an artist.

"If I kept doing surfing every day, day in and day out for this long I probably would have hated it by now," he says.