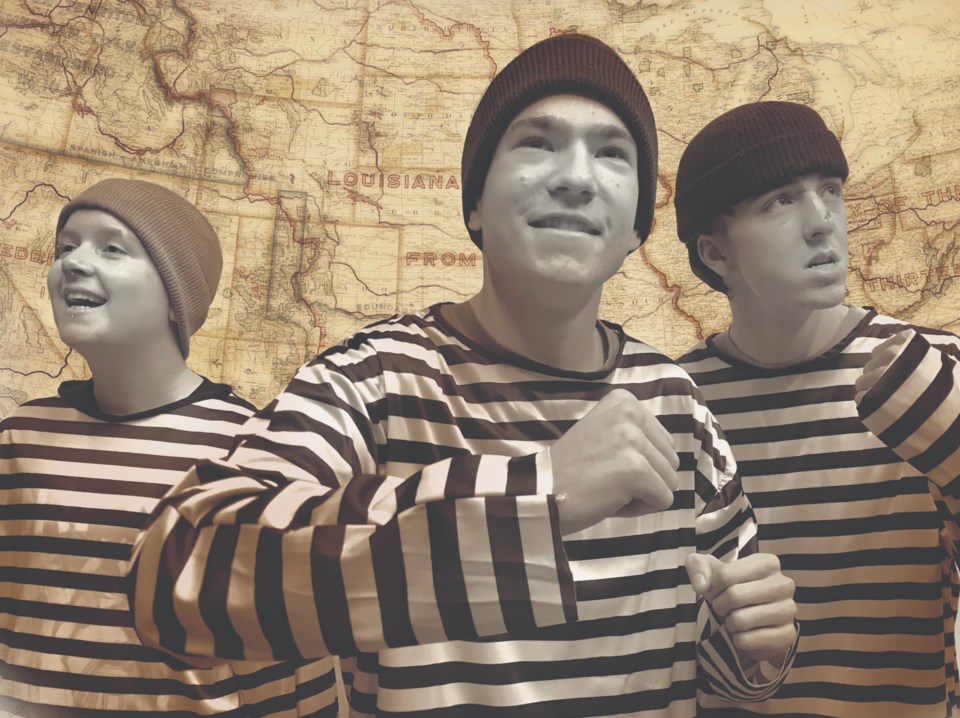 From left: March Losee, Kieran Nott, and Chris Beaton star in A 1930s Odyssey “O Brother Where Art Thou?” starting May 14. Photo submitted

Pemberton Secondary School’s drama class might have had to push back its production of A 1930s Odyssey “O Brother Where Art Thou?” but, in the end, it worked out for at least one of its stars.

Chris Beaton, who is playing Pete, wound up with a broken jaw after an ill-fated run down Air Jordan (more specifically the drop below, called Third Step), while skiing this winter.

“I thought I was going to have to do the play with my mouth wired shut,” Beaton says. “It was nice to be able to push the play back. By the time it happens, I’ll be learning how to use my jaw again.”

The production—which marks the program’s 20th since 2015—has been marred by challenges, but it was kind of fitting with the story they’ve set out to tell, says drama teacher and director Renata Zablotney.

“We’ve all gone through these huge hurdles in the making of this play, which is representative of the characters in this play,” she says. “We fought very hard to make it happen and have gone through our own personal suffering for it and we’re ready to put on an amazing show.”

The production is based on the 2000 Cohen Brothers’ comedy-drama O Brother Where Art Though, but they’ve added additional elements from Homer’s Odyssey.

“We say it’s loosely based because we’ve added more elements from Homer’s Odyssey, which the original movie is based on. We’re drawn to this play because it’s the tale of the forefront of Western civilization. It’s a message that’s filled with hope. We need some of that this year,” Zablotney says.

More specifically, the production tells the story of three men who break out of jail in the 1930s and find themselves on a treasure hunt. “What they don’t realize is the treasure hunt is an exploration into their souls,” she adds. “They undergo a lot of changes.”

For his part, Beaton’s Pete, who is one of those men, is full of rage and resentment, but eventually transforms becoming remorseful and reflective. Having acted in a few other PSS productions featuring whacky characters, the Grade 12 student says the change of pace was welcome.

“It was super different,” he says. “The other ones have been silly and fun … This one is more [about] people going through changes and finding themselves.”

Because COVID-19 restrictions are still in full swing, the production—which features two casts for two different shows—will be recorded at the Maury Young Arts Centre and posted for sale, with the purchaser owning both copies.

However, rather than shooting one take of the play, it will be shot and edited more like a movie.

“I want to treat it like a studio experience,” Zablotney says. “It’s not a stage experience … We have to accurately shift the direction to ‘We’re making a movie. We’re making a dramedy.’ I think there will be more to gain from that. This is also to the benefit of having the media studies crew working on it.”

To that end, the finished product will also serve as a portfolio piece for the actors, musicians, set designers, camera people, and editors who worked on the film.

“We’re trying to showcase as much as we can to showcase the work that we put into it the last couple months,” Zablotney says. “That’s all we have to immortalize it is these videos.”

The videos will be available for purchase for $27.54 on eventbrite.ca. You can pre-purchase it now for the May 14 release date. It will be on sale for one week after that.