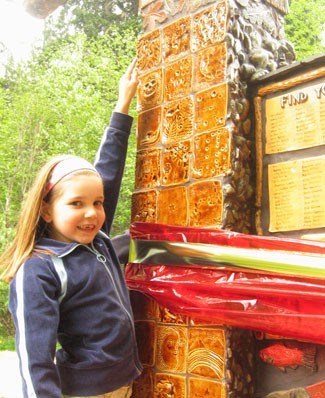 Whistler residents of all ages came out to see their handiwork on display at a favourite gathering spot on the Valley Trail last Friday afternoon.

A newly installed public art piece designed by Whistler ceramic artist Penny Martyn was celebrated with a small ceremony, which featured a ribbon cutting by the artist and acting mayor Caroline Lamont, champagne toasts, and of course, a cake.

The piece was commissioned by the RMOW and the Public Art Committee in 2004 for $5,500. It is the first public art to be installed outside of Whistler Village.

MartynÕs design features two concrete pillars clad with ceramic tiles designed by community members at a public workshop last January. Tilemakers ranged in age from a three-week-old baby, (who left a tiny foot imprint in the clay) to senior citizens.

RMOW Parks Planner Kevin McFarland said the community nature of the project was a major part of what attracted the selection committee to MartynÕs proposal.

Martyn, an artist of 15 years working out of a studio in Emerald Estates, said she drew her inspiration from "the site and the people." The sculpture is located at the trailhead of the Valley Trail at the end of Lorimer Road, by the River of Golden Dreams, a popular spot to look for Kokanee salmon and a natural meeting place for the wide variety of Valley Trail users.

"It was an epiphany for me, that this was the spot where I needed to bring people together," the elated artist said.

The sculpture contains interactive elements including a forest scene with animal characters (including MartynÕs beloved dog companion Garlick) hidden WhereÕs Waldo-style. There is also a description of the life cycle of the Kokanee salmon, an element celebrated by a wood-carved centrepiece crafted by MartynÕs husband Bruce.

Response to the piece was enthusiastic. Three generations of Tobias women were on hand to view daughter NicoleÕs tile. Grandmother Donna Tobias declared the sculpture "wonderful" and used the occasion to reminisce about a very different Whistler Ñ a Whistler without Public Art committees or paved trails.

"Back in 1970 there wasnÕt any of this," Tobias said. "It took a long time to build a community here. Now itÕs got so much to offer."

Just as MartynÕs project was officially completed this week, the RMOW and the Public Art Committee joined with Haida and local First Nations groups to celebrate the launch of Haida stonecarver Lawrence KnowlesÕs basalt bear project last Saturday afternoon. Knowles will be carving the bear in public from the shelter area in Rebagliati Park through the summer months.