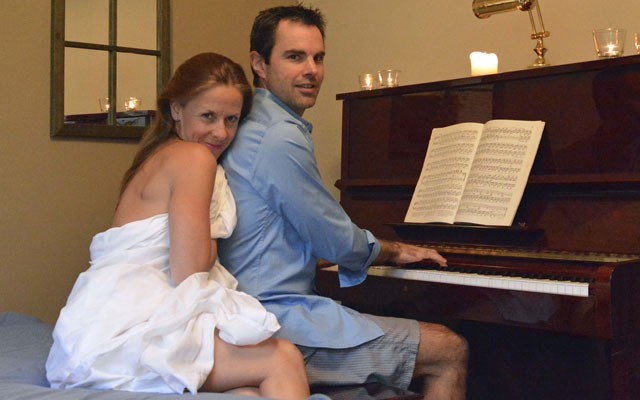 Hoping for a sexy, raunchy Valentine's Day? Musical theatre might be the answer.

Smokin' & Broken is the latest vaudevillian offering of 22 songs by singer-piano duo Heather Feeney and Scott Knight, taking the best from contemporary musicals and cabarets and telling a story that anyone in or out of love can relate to.

"We titled it Smokin' & Broken as an all-encompassing relationship show. A relationship is either 'smokin'' — it's awesome — or it's broken," Feeney laughs. "Valentine's was selected because we thought we might get more husbands out to it.

"I guarantee people will enjoy it. There's definite humour and more on the crass side of humour for this particular show. Definitely some raunch in there. We sing a song called Anonymous Sex, for example."

It might be best to leave the kids at home.

Smokin' & Broken is Feeney and Knight's fourth revue, though they have worked on and off together since 2002.

The pair performs the show on Saturday, Feb. 15 and Sunday, Feb. 16 at the Brackendale Art Gallery (BAG). Tickets are $20 at BAG and Xocolatl in Squamish.

Blue-collar Squamish can be a tough sell for the genre, Feeney said, but she and Knight win over converts every time they perform.

One friend who reluctantly came out to their last revue kept the program afterwards so he could check out the musicals the songs came from.

"He said, 'I was so surprised. I did not know I would enjoy it as much as I did.' I thought, 'Yay, let's see if we can get more of you loggers out here.' That would be great!" Feeney laughs. "The fact that he came was awesome and the fact that he loved it was even better."

She said all the bases are covered because she is the naughty one while Knight is nice, or so he seems at first.

"We have a lot of fun together. Scott is so straight until you get to know him and then you realize he is a naughty little boy all dressed up. He's clean cut, he's a piano teacher, he's got glasses... Sometimes I pick a song and I ask him if he is OK with me singing it (because it's a bit off colour) and he's 'Oh, yeah! Bring it on!' He's great and supper talented on the piano," says Feeney.

"We were looking for a way to get more people exposed to not only our work but the exciting world of contemporary musical theatre."

Feeney says it is unfortunate that a lot of people have a "sour taste" about musical theatre.

"They don't want to see a production of Oklahoma or The Sound of Music because it's not contemporary, it's not mainstream, it's sort of fairylandish, it's not reality," she adds.

But accessibility is not a problem these days, she says.

"Currently, there are a number of composers and lyricists who are putting on very realistic productions, touching on things people deal with day-to-day. Those are the types of songs Scott and I select for our productions," Feeney says.

"I look at composers I love, and the lyrics I love, and I make sure they tell a story in themselves. I piece these songs together with the others I think they fit with and there is a story being told from the beginning to the end of the show."

The composers are not yet household names like Sondheim or Rogers and Hammerstein, but they are well established. Adam Gwon, Sam Carner and Derek Gregor, and Benj Pasek and Justin Paul are among Feeney's favourite young composers performing in nightclubs and Off-Broadway.

Feeney says they may take one of their shows to Vancouver in May. They'd like to come north, too.

"I looked at the lineups of shows playing in Whistler and I am thinking 'Why not there?' It's something we have to explore," Feeney says.