Rebel Appliance are well-suited for the times 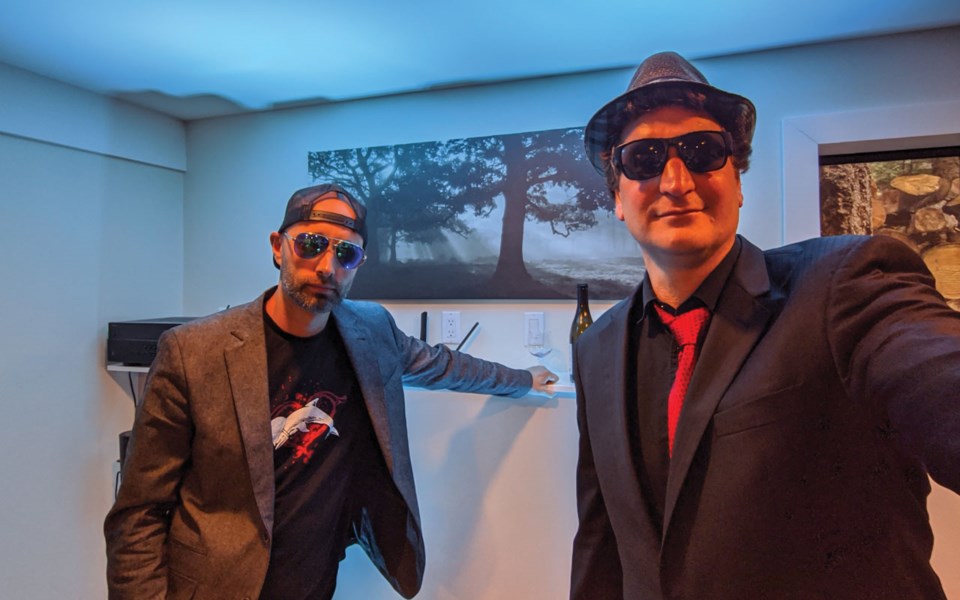 Murray Hunt and Travis Smith might be best known as members of The Combat Dolphins, but they also have a duo called Rebel Appliance. Photo submitted

When Travis Smith and Murray Hunt played one of their early shows as a duo at a Whistler bar last winter, it was without a proper name.

So, the bar took it upon themselves to describe the pair to their patrons as “Combat Dolphins Lite.”

Sure, that was Smith and Hunt’s louder, more raucous rock band, but it drove home a point: if they were going to take their casual, campfire jams to the stage, they needed a name.

“You come to see The Combat Dolphins at Swedish Aprés and there’s 200 people there and it’s melt-your-face-off loud and it’s a really awesome show, and then you come see Trav and I playing and we’re doing our thing, it’s a totally different experience,” Hunt says. “It’s probably a bit disingenuous to use the same banner for it.”

And so, shortly before COVID-19 upended the world, Rebel Appliance was born.

While the timing was a complete coincidence, the pared-back acoustic format means they’re better suited to hit the stage again as soon as they’re allowed.

“Before COVID, we were hearing from curators, like Arts Whistler … They were looking for smaller, more manageable outfits already. Then fast-forward to something we could’ve never predicted—the environment we’re in now—looking forward, on the bar side of things they’re limiting capacity and their take is going to be can we afford to bring in a four-piece band? We’re a little more available in this format,” Hunt says.

To that end, the pair was recently invited to play Arts Whistler’s Bike Shop Sessions, streaming from Coastal Culture. The experience was remarkable, but the pair had had plenty of practice behind the camera.

When shows first started getting cancelled, The Combat Dolphins were one of the first local bands to pivot to livestream shows and help raise money for the Whistler Community Services Society.

“The part that surprised me … I would get these requests,” Smith says. “I’d be chatting online having a phone call and people would be like, ‘When’s the next livestream? We loved it!’ I had no idea people even watched it.”

The pair is in a unique position to excel in the world of livestreams—where bands are free from the shackles of set lists or set times.

“We kind of have this weird mind-meld thing where little visual cues are enough to indicate changes,” Hunt says. “Our band rehearsals now are having a few too many drinks around the campfire at 1 a.m.”

That’s partly because they go way back and, actually, are step-brother-in-laws.

In fact, the first time they ever met was at a “fam jam” in North Vancouver years ago. Hunt’s father-in-law stuck him on bass (you’ll usually find him with a guitar) and Smith, who was visiting from Australia at the time, was behind the drums for the first time in several years.

While the set was mostly ‘50s music, Hunt had a “sixth sense” that he and Smith would have the same musical taste. So, he tested it.

“I played the opening bass riff to Pearl Jam’s ‘Jeremy,’” he says. “I just saw Trav light up. I thought, ‘This guy’s cool.’”

Adds Smith: “Then I moved back to Canada a couple years later and then moved up to Whistler and I was like, ‘Oh, Murray’s in Whistler. Right.’”

Where The Combat Dolphins are about bringing the party, Rebel Appliance lets the duo dig into music they truly love—from Paul Simon to The Decemberists and MGMT,  judging by their eclectic Bike Shop Sessions’ acoustic show.

“With The Combat Dolphins, we tend to play songs that people really like and we feed off their energy,” Hunt says.

“They’re hearing songs that they love. With Rebel Appliance, it’s almost reverse. We’re playing songs that Travis and I are really passionate about and it seems like the audience feeds off the energy we’re putting out because we’re super engaged with the material.”

To keep an eye out for any upcoming shows visit facebook.com/rebelappliancewhistler.