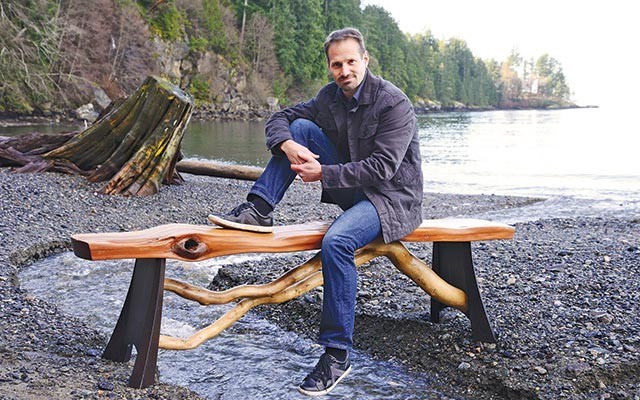 Whistler show Burns Jennings, right, made a key-card return box, above, which led to an exvhibition of his furniture. Photo submitted

Out of a thank-you present has come a two-week Whistler show for custom art furniture builder Burns Jennings, who is exhibiting his talents in the lobby of the Four Seasons Resort in Whistler from Feb. 21 to March 7.

Jennings was in the Four Seasons in downtown Vancouver one day, saw artwork on display there and felt he had several furniture pieces that would complement the scene.

"So I stopped in one day and told them they might like to see them to continue the theme in the lobby and they asked me to join their artist-in-residence program," Jennings explains. "Since then I've done two shows there and as a thank you I made them an express card return box, for people checking out," he recalls.

"The manager of the Four Seasons in Whistler was in Vancouver and saw the box, loved it and asked me to build them one. I said I'd build him one for free if I could show my work in his lobby. And here we are!"

Jennings has been building pieces from his home on Bowen Island in Howe Sound for the last 12 years, though his first showing was much later, in 2012. His degree in environmental studies with a double major in visual arts from the University of Victoria is worth mentioning; repurposing used work and other materials is at the heart of his work.

"The key for me is that I mill a lot of my own material. A lot of it is found," he says.

As an example, he describes the provenance of a yellow cedar and mahogany coffee table he recently made.

He was working on boats and the mahogany, all covered in seaweed and barnacles, floated into the boat shed. "I didn't want it to bang against the wooden boat that I was working on, so I pulled it up and put it on the deck. I couldn't tell what it was so I took out a chisel and knocked a corner off of it and sure enough it was mahogany," he says.

"I scraped off all the stuff, put it in the shop and dried it out. Then I converted it into the legs and the top and found a piece of yellow cedar on the beach and milled it myself."

As well as found wood or wood that "drops by," Jennings also follows a hydro pole protection program on Bowen Island. Any trees that come down because they are in danger of falling onto a hydro line are converted into furniture via his mill.

He uses large pieces of driftwood from the beach, too.

The result is, to say the least, sculptural.

"I'm trying to create furniture that is going to last generations and also have an aesthetic appeal to each one of the owners, so that we get back to the notion that furniture matters in our homes. It's not only a stylistic choice but also an art form as well, something that can be appreciated every single day," he says.

"From a young age I was surrounded by 200 and 300-year-old Canadiana and Americana antiques. I saw the value in having something that was built properly and sometimes not built properly, a piece that we had to fix up," he says.

"That love and care that is put into a piece of furniture — I am trying to resurrect that so that it's not just a place to put your feet or your cup, it's when you walk into your house and you're pleased to see it. It creates a visual stimulus."

At the Four Seasons, Jennings will be highlighting pieces already completed; some will be for sale while other pieces will be borrowed from current owners for the show.

"And I will be working on a couple of minor projects. In the lobby I will be talking about my work with patrons in the hotel and other visitors and hopefully inspiring them to think about what their next project will be and seeing if I can work with them to design and a build a piece for them," he says.

Jennings agrees that it's not discretionary spending; it's an investment for collectors. His work is not something found at IKEA.

"I did my first show in November 2012 and the purpose is to get exposure and meet people. I want to give it the 'old college try' to get the exposure I want to get. It's a challenge and also very rewarding because I get to explore the type of furniture I want to build. It's not consignment at this point. I'm producing stuff for galleries," he says.

Plus, people come to him years later with a project in mind.

"I get calls that have come about from the first show I did and someone will tell me they are now able to proceed with a table or something else," Jennings says.

"It's really hard to judge the impact of a show because it sometimes takes a while because you will get a call up to a year or two later."