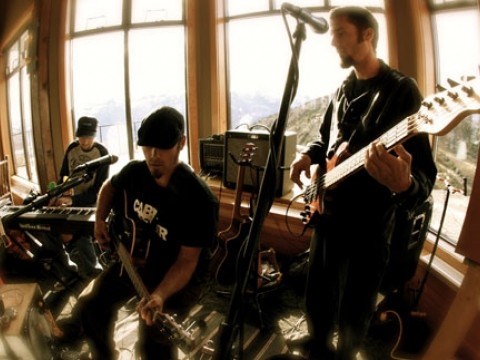 For the past year and half, Jenkins has been touring extensively throughout B.C. and Alberta with his new band, and the more small towns they visit the more confident he becomes that certain small town attitudes are of great importance in these weird, wild times.

"Without getting into any political, environmental or sustainable rant, I think (the project) is definitely relevant to the times," Jenkins says.

"There are certain aspects of small town life that only exist there," he says.

Their new album Songs from Home , released in March, plays like a collection of short stories linked by the major changes facing small towns in the modern world. The song "Smalltown Revival" deals with the closing of a town's mill and the people of the town have to find new ways of surviving - a heavy theme buoyed by the band's dancehall boogie.

"I try to do it subtlety, right?" Jenkins says with a laugh. "Just so I don't feel like I'm ramming this...you know what I mean?"

In Songs From Home , Jenkins uses the small town setting as a way to dissect the wider shifts people are facing in the modern age, big and small towns alike.

"Small towns exist in every city as well," he says. "You have your Glenmore Heights, or whatever, and it's a little area that has its store and that's how all cities are formed. They all started small, right?"

The name is by no means a limitation on their ambition, either musically or professionally. It merely captures the ethos of the band and mirrors what many people, big and little town folks alike have been feeling in the age of rapid urbanization - the romanticizing of small town living.

Everything about the band, from the lyrics to flourishes of the organ, is about staying in tune with how they're feeling at that time in their lives. Songs From Home is a testament and a celebration, of sorts, of the small town life in the 21st century,

Born in Bancroft, Ont., Jenkins moved to Canmore in 1997 and then moved on to Golden in 2001, where he started performing in various bands and independently around town. He's become a fixture in Golden's music scene, playing solo gigs each week. After receiving a recording grant from the Canadian Society of Recording Artists, he assembled Swerving Gently, and released two albums, 2008's Backroads and Highways and 2009's Rare Mileage , before calling it a day. He started the Smalltown Revival shortly after, enlisting his brother Dan on bass and Yannick Robitaille on keys.

Since then, they've had modest airplay on CBC Radio 3 and college radio stations. They've been touring as much as possible, playing and replaying towns and cities as often as they can to hammer the locals as much as possible with their sets.

So far, it's been working in the smaller markets. They've played Kaslo three times in under a year and the difference between the first and third was enormous; in August, the venue was jammed with newfound fans who had been turned on by the first two performances. By mixing humour and audience participation with rustic folk ballads and a whole lot of backwoods dancehall boogie, the word of mouth has been spreading. Modesty, it seems, is the band's core philosophy.

"I've never had any dreams of being a huge music rock star. I just want to be able to survive doing it," Jenkins says.

They're playing two shows this week, one in Pemberton and one in Brackendale. Artist David Low will join them onstage for the Brackendale show, painting live while the band performs. The paintings will be for sale after the show.

They took the idea from a group of Vancouver artists in the 1960s, who would live-paint at jazz clubs, where the paintings would be auctioned off as a fundraiser. They've been doing it together off-and-on since 2008, travelling a bit with the band.

"If it's a special night, if they're having a good time, they can take something like that home with them. It's like the artistic equivalent of a CD, only it's more relevant to the night because it was created that night," Jenkins says.