White Cowbell Oklahoma hits Whistler with new material from Bombardero as they make their way across Canada on 10th anniversary tour
Sep 4, 2009 8:02 AM By: Holly Fraughton 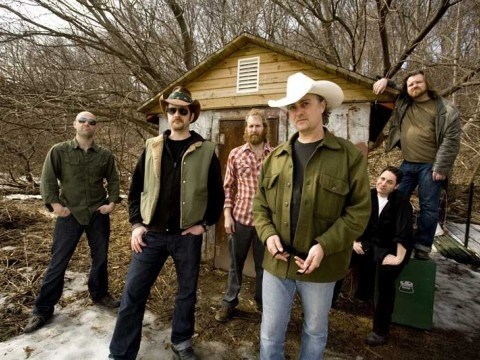 Over their years on the Canadian music scene, these pseudo-cowboys have managed to establish one hell of a hell-raising sound in the style of insane Southern rock, featuring Clem C. Clemsen on vocals and guitar, Hollis P. Cartwright III on guitar, Dingo Von Devereaux on drums, Bubba Lee Phett on bass and vocals, Chainsaw Charles on percussion and The Cousin Who Hath No Name on guitar.

"I could go on about our immortality and Elvin bloodlines and how some of us were orchestrated in laboratories, sewn together from criminals and grown in vegetative tanks, but we've had the best scientists and botanists and chemists putting us together, piece by piece," Clemsen explained, in his imaginative way.

"We're a six-pointed throwing star of rock and we like being called a sextet," Clemsen said.

What formerly was a group of nine was recently reduced to a group of six, because, as Clemsen puts it, they like to work in multiples of three.

"...Because it's slightly infernal, if you get into numerology."

Clemsen proudly owns a recent description of the band as a "trash rock outfit influenced by guns, barbeque, moustache rock, dirty sex, booze, corn liquor, and explosives." But he adds one small thing: a good dash of "brown magic."

Haven't heard of them? Well, even if you don't manage to score a ticket to the show this weekend, you're bound to catch their refrains if you're in the village, because Clemsen pretty well has his mind set on blowing the roof off of the GLC.

"We like to smash the audience on the head, musically and visually, and as always, we like to shoot our testosterone death rays out of our eyes and groins and turn any chin-scratching skeptic into a full-blown slave to our will," he said.

Whistler is just one stop along their epic 10 th anniversary cross-Canada tour.

"As the immortals that we are, 10 years is just a spit in the bucket, but it is nice to kind of reach these milestones and just kind of be able to squash every skeptic along the way who wrote us off," Clemsen said.

To date, the band has released a total of three full-length albums, with the most recent being Bombardero , which came out earlier this year. On this album, the musicians haven't shied away - at all - from delving into the southern, heavy psychedelic rock from the '70s that they've all looked to for inspiration for so long.

"We wanted to capture the psychotic effect that the White Cowbell Oklahoma live show has on the mental stability of anybody watching," Clemsen explained. "We wanted to try and match that a little bit better with this record..."

At their Whistler gig, expect to hear some of their new, heavier material married with their traditional "pickin' and grinnin'" southern boogie, country rock feel.

This time around, they're set to take the stage with The Deadcats, who are sure to complement their own high-octane style with rocking instrumental riffs and some serious psychobilly twang.