Said the Whale, Lindi Ortega, Barney Bentall and Jon and Roy join the VSO in a week of free concerts around Canada Day
May 21, 2014 10:00 PM By: Cathryn Atkinson 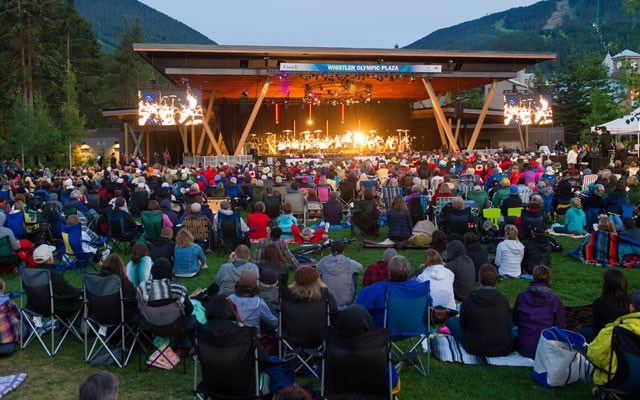 Present for Whistler Last year's free concerts by the Vancouver Symphony Orchestra proved very popular at the resort, with classical music under the heavens. Photo by Mike Crane/Tourism Whistler

Variety is the spice of this summer's Whistler Presents free concert series.

Along with the already announced return of the popular outdoor concerts by the Vancouver Symphony Orchestra, which take place this year from July 1 to 5, are four bands and performers covering rock, folk and indie. All concerts take place at the Whistler Olympic Plaza.

Lindi Ortega performs on Saturday, June 28, at 7:30 p.m. Ortega is a veteran Toronto-raised singer-songwriter and Polaris Music Prize nominee now based in Tennessee.

Barney Bentall and the Grand Cariboo Opry, a perennial favourite in the Sea to Sky region, performs on Saturday, June 28, at 8:30 p.m.

Meanwhile, the music to be performed by the Vancouver Symphony Orchestra was announced.

On Canada Day, Tuesday, July 1, at 3 p.m., the full orchestra will play a wide selection of popular composers, including Tchaikovsky, Dvorak and Rimsky-Korsakov. Wagner's Ride of the Valkries and John Williams' Raiders of the Lost Ark: March will also be performed.

The orchestra's concert on Friday, July 4, at 8:15 p.m., highlights American composers in honour of the U.S. Independence Day holiday. Composers include Leonard Bernstein and Aaron Copland. George Gershwin's Rhapsody in Blue will be performed, along with two sections of the Star Wars Suite by John Williams.

The final concert by the VSO, on Saturday, July 5, includes music by Verdi, Sibelius, Grieg, Bizet and Stravinsky.

As well, members of the VSO will play other performances during the first week in July as smaller ensembles, brass quintets and string quartets.

Whistler's mayor, Nancy Wilhelm-Morden, said the resort was gearing up for another busy summer.

"It's a very good lineup, that's for sure," she said. "This is now the fourth year and in the first year I think the goal was to have a massive concert to entice people to come to Whistler for the actual music performance. Then we changed that focus in the second, third and now this year. The idea is not to draw people to Whistler for the sole purpose of seeing a particular musical act, but to ensure that there is something going on in Whistler throughout the course of the summer.

Wilhelm-Morden declared herself a fan of one performer in particular.

"I do like Barney Bentall. He really is (a popular performer) and quite a rocker, I'm really looking forward to him," she said.

August's lineup for The Whistler Presents series will be announced in early June.