Vancouver saxophone quartet performs at Our Lady of the Mountains Catholic Church on Sunday, Nov. 18
Nov 14, 2018 5:00 PM By: Alyssa Noel 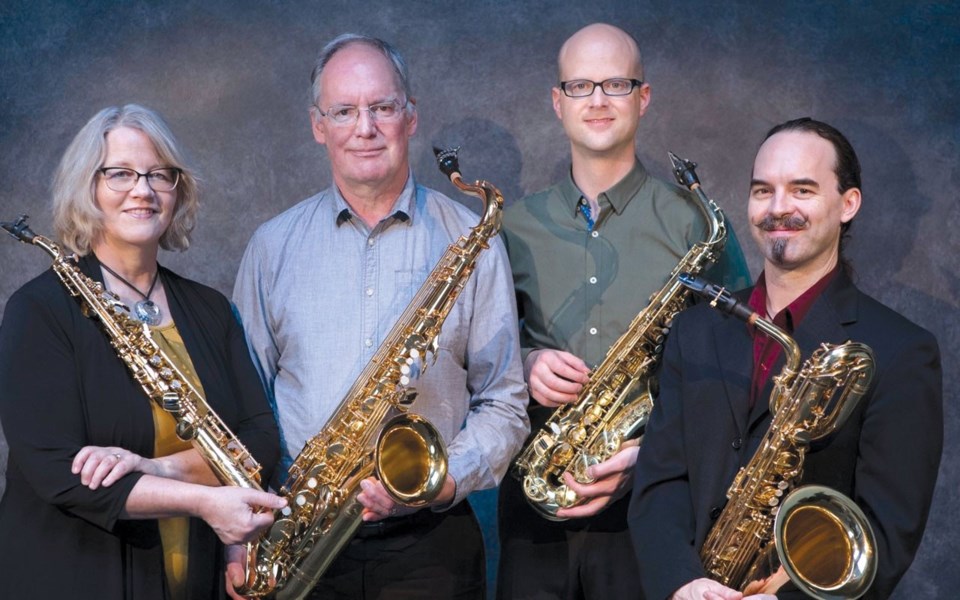 Saxophilia is bringing a world premiere to Whistler.

The Vancouver saxophone quartet is set to perform at Our Lady of the Mountains Catholic Church as part of the Whistler Chamber Music Society series on Sunday, Nov. 18. Among the varied and accessible range of songs they'll play will be the debut of a new piece by Edmonton composer Josh Lai.

"He heard us perform at a saxophone conference in Edmonton a couple of years ago," says Colin MacDonald, who plays the baritone saxophone with the group. "He came up to us after the show and said, 'I want to compose for you guys' ... He's given us a lot of material to work with. It took us about a year to work through the piece and get it up to the level we want to perform at."

But finally, it's ready for performance, just in time for the Whistler show. "It's a serious piece of music—20 minutes long—but it's not hard listening," MacDonald says. "It's well composed and kind of complicated construction, but it's still very tuneful and enjoyable to listen to."

On top of that, audience members can look forward to an eclectic mix of saxophone styles that will expand their understanding of the instrument beyond jazz music. "The music we have is a real mix. We've got some arrangements of Renaissance music. We've got some light jazz arrangements, some traditional French classical saxophone quartet from the 1940s in the style of (Claude) Debussy," MacDonald says.

The quartet has spent nearly two decades honing their sound. They first formed back in 1996 when Julia Nolan and David Branter—local music teachers who are also husband and wife—decided to put a quartet together and invited MacDonald, their former student, to join them. Kris Covlin has rounded out the group on the alto saxophone in recent years.

"They had gone through a couple different iterations for people they had been playing with for a few years," MacDonald says. "The personalities clicked. That's the key theme for chamber music. Everybody has to get along."

Over the years, they've made the group a priority alongside teaching jobs and other music gigs, playing shows around the Lower Mainland. But it wasn't until earlier this year that Saxophilia released its debut self-titled record. It's filled with "experimental and contemporary" Canadian compositions written in the last decade, MacDonald says.

"It's pretty heavy listening for someone not into contemporary music," he adds. "So none of that is in our programming (for Whistler) ... We always like to think about where we are and what kind of expectations people have for programming. That's why we have a wide blend of styles and pieces."

However, if Whistlerites feel moved by their performance, they'll have some CDs on hand at the show, MacDonald says.

For those unfamiliar with the saxophone as a classical instrument, the Whistler show will serve as a good introduction to what it can do. "I think if you're curious about the saxophone and different possibilities of it, you should come to the concert. We like connecting with audiences—especially small chamber music groups where you can be close to the audience and we talk about the pieces and what we're doing. It's more intimate that way. We welcome any chance to chat with people afterwards."

Saxophilia performs at Our Lady of the Mountains Catholic Church on Sunday, Nov. 18 at 5 p.m.

Tickets are $20 for adults and $15 for youth (under 35). They're available online at whistlerchambermusic.ca, at the Whistler Museum (cash only) or at the door (also cash only).