Scrooge and company recreate their Christmas miracle on stage 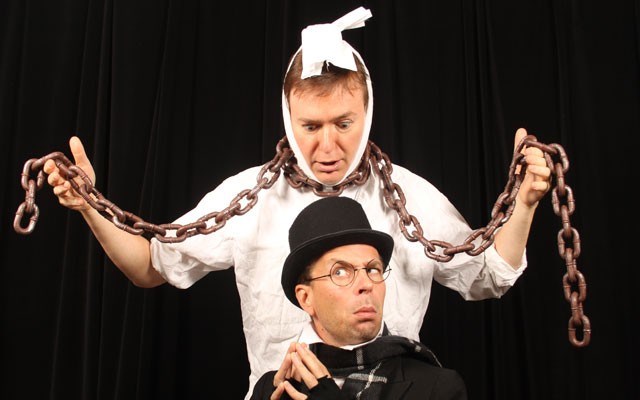 A Christmas Carol... you know how it goes.

Nasty and parsimonious rich dude Ebenezer Scrooge is horribly mean to his underpaid clerk Bob Cratchit, who wants a little more coal for the tiny fire in the corner of his office, and, more importantly, hopes to have Christmas Day off to spend with his family.

In the dark of night, the ghost of his late business partner Jacob Marley visits the miser and is followed by three wondrous and frightening spirits, the ghosts of Christmas Past, Present and Future. Scrooge must relive his life through them and contemplate the path he is on.

Charles Dickens wrote his novella, which he called "A Ghost-Story of Christmas," in 1843 and it has never been out of print — a seasonal tale of redemption that has been embraced by millions.

Toronto's DuffleBag Theatre has staged its own version of the play for 21 years and they are bringing their hour-long family show to the Maury Young Arts Centre in Whistler on Saturday, Dec. 10, at 5 p.m.

"It is truly timeless," he says over the phone from Abbotsford, where they have stopped to perform as part of their B.C.-Alberta tour.

"A Christmas Carol has so many different versions and in our version there are plenty of ways to have fun."

What makes DuffleBag's staging so unique is the audience participation — the actors are all ages.

Along with the company's four professional actors, who play minor roles and aren't adverse to standing in as talking trees or desks, the main roles are played by members of the audience.

It has been a fun approach that has made their shows memorable, Lundgren adds.

"It's how we deviate and have fun and it makes a unique version of the play. Whatever a person brings to the stage we work with," he says.

"There is a narrator who tells the story and acts as a way of giving directions to everyone. It's a really joyful approach with a lot of playing and laughter.

"The people on stage are amazing. We do a good job leading them through the story, but there are always moments when things don't quite go right — people mishear or misunderstand what they are supposed to do. It makes it special and unique and the payoff is hilarious."

DuffleBag Theatre was founded in 1992 and along with public performances, the troupe also recreates classic children's tales in schools across Canada.

All their plays — whether Beauty and the Beast, Robin Hood, Snow White or Macbeth — use audience participation to tell the stories. They also perform in French.

While the touring team takes their shows on the road, half the company remains in Toronto and performs there, too.

A Christmas Carol is, of course, a very popular family night. Lundgren says it is performed only in the run-up to the holiday season and they are always ready to do it again, once November rolls around.

Asked what is his favourite part of performing A Christmas Carol is, he evokes the sparkle in the eyes of the smallest audience members.

"I love watching the look on young kids' faces," he says.

"Often it is the first time they have ever been to see a play or been in a theatre. Their parents will explain to them what happens and that the stories are being told right in front of them. Watching them react to that, the sheer joy on their faces — it's the best feeling. They clap and laugh and boo."

Lundgren appreciates children's basic honesty as they respond to the meanness of Scrooge.

"Kids will let you know right away if they like what you are doing; there is an immediate response," he says.

Lundgren says DuffleBag has brought their repertoire to Whistler six times and fully intends to take advantage of the opportunity to ski. He has high hopes for powder.

Tickets for A Christmas Carol are $12.50 for Arts Whistler members, $15 for non-members, and $10 for children. They can be purchased online at www.artswhisler.com or purchased at the Maury Young Arts Centre box office.