Sports action film one of six being screened at WFF Adventure Film Series at GO Fest
May 13, 2015 6:00 PM By: Cathryn Atkinson 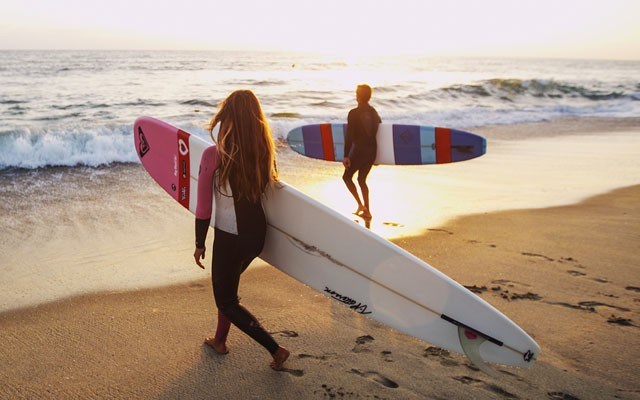 Bliss is out there Two of the stars of Search For Joy, a new film being shown at GO Fest this weekend. Photo submitted

The film Search for Freedom takes the dreamers who are the top of their games and gets them talking about the beauty that comes from succeeding by living in the moment.

Ski film guru Warren Miller explains in the film that, "The basic instinct of a human being is his search for freedom."

Surfer Kelly Slater, skateboarders Tony Hawk and Nyjah Houston, mountain biking godfather Gary Fisher and many others explain why they do what they do and what is gained.

Search for Freedom is one of six films being show during GO Fest as part of the Whistler Film Festival's Adventure Film Series.

"When I started out making action sport films in the early '90s, there was really a handful of people making them and by the end it had grown so much," Long says.

"I really wanted to tell the story of the evolution happening, from the beginning in the '50s with surfing in California and then interviewing dozens of people. We interviewed them about their personal stories and experiences.

"The concept of freedom kept coming up in different ways. The theme starts to become that search for freedom."

Search for Freedom will have a 40-theatre national release in the U.S., unusual for a documentary.

Earlier this year, it won the Best Producer Award at the Beverley Hills Film Festival.

"We had such a small crew that you get your hands on a lot of things in the filmmaking process," Zeman says.

Says Long: "I started doing interviews for it in 2004 and it was then on the shelf for a while... but once we got the green light, the resources we needed to complete the film... we really allowed ourselves to go with the flow. We had the freedom to explore different avenues and we're really happy with how it turned out, but there was a lot of discovery along the way."

The response has been enthusiastic, he adds.

"We brought a lot of young people into the story because of that sense of play and we thought people could relate to them," Zeman says.

"To mix that with the champions and the pioneers, who have proven themselves, there was a balance of people who found their way."

Search for Freedom will be screened at Millennium Place on Saturday, May 16, at 4 p.m.

Tickets are $10 for each film; a WFF Adventure Series Pass for all six is $50. Tickets are available at www.whistlerfilmfestival.com.