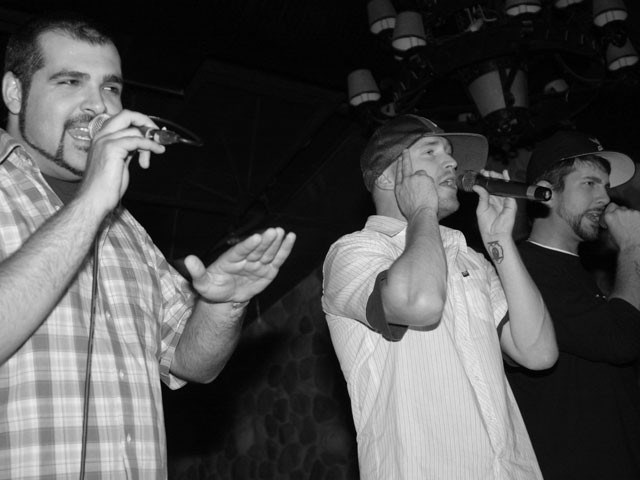 I don’t know who is more excited about Sweatshop Union’s new album: fans or the band members themselves.

“We’ve been looking forward to it for so long,” said Kyprios, one of the seven Sweatshop Union maestros. “We are tired of the set. We change it up a lot, but we are f***ing tired of it. To have some new material and new blood in a set, well we are all salivating at the prospect.”

The yet untitled album won’t be out until the New Year, but new tracks will make their way into the Vancouver group’s next live concert on All Hallow’s Eve Wednesday, Oct. 31 at Garfinkel’s as part of the Heaven and Hell Block Party.

The new record will be a complete departure from their last album, the critically acclaimed United We Fall released on Battle Axe Records in 2005.

The new album reflects how Sweatshop Union came to be: a collective of many groups. The Battle Axe recording artists began as four independent units: Kyprios, Dirty Circus, Creative Minds and Innocent Bystanders.

Even though the crew now performs collectively, the new album’s tracks highlight each artist’s compositions separately. With some members living in Victoria, others in Tofino and Vancouver and focus shifting back and forth between music, new families and touring with other groups, trying to get the Sweatshop Union collective into one recording studio for three months was impossible. But with producing credits on almost everyone’s resumes (Kyprios is the exception), instead of trying to surmount the impossible, the crew decided to compose their own individual tracks.

The result was too many songs with each artist’s track challenging the others to up the ante.

“There wasn’t a lot of cross pollinating,” Kyprios said. “What really happened in this one is that guys from different groups made their music and sent it in. Somebody would bring a great song, we’d hear it and everyone got excited. You’d think, ‘I’ve got to match that level of musicality.’

“This record more than ever, the groups have concentrated on their individual efforts… With this record, we got the privilege of an excess of material, so we really got to pick the best. Songs lived and died by the committee. We didn’t want to go too far from what we are like when picking the music. We do want to have a distinctive sound.”

What distinguishes this Juno-nominated seven-member union is their socially aware music that speaks out against senseless consumerism, racism, poverty and other social ills through a harmony of textured wordplay and MC harmony.

Not only is the group shaking up their sound since their last album two years ago, but their live show as well.

“We are going to change what we do live,” Kyprios said. “We want to make it more of a spectacle with more rehearsed and polished numbers — more than just instrumental with MCs rapping over them.”

Keyboards and synthesizers will build in more of a live aspect to their shows.

But anyone who has caught one of their insane performances knows these boys know how to deliver. Sweatshop Union anthems are reinvented as tracks weave in and out of each other, adding even more layers to the already eight-layered vocals.

“We want to bring more of that (switching up songs) into that set; where things will morph into one and other and we’ve broken down a song various ways instrumentally,” Kyprios said. “Songs rebuilt live are just pieces of it. We put them together more like a puzzle as opposed to here is one song from start to finish.”

Despite freshening up the sound and live show, Sweatshop Union pre-makeover was and is still a household name in West Coast hip hop.

The artist collective has toured with the likes of Black Eyed Peas, Jurassic 5, Blackalicious and fellow label mates Swollen Members.

Nomination credits include the Juno Awards, Canadian Radio Music Awards and MuchMusic Video Awards. Recognizing the appeal of their music, their tracks have made their way into dozens of films, television shows and video games.

Thanks to music showcases in ski, snowboard and skateboard films, Sweatshop Union’s primarily Canadian base grew to a U.S. following with the band clocking up more than 100 shows in the U.S. last year.

“We were amazed by how many people in the U.S. new our shit,” Kyprios said. “We all got temporary work visas and toured the hell out of those markets we were popular in. All of the ski, snowboard and skateboard crowd, and mountain towns had people who knew who we were because of the films.”

Whistler is also one of those mountain towns that knows what these boys are all about with showings at events such as Crankworx and the World Ski and Snowboard Festival.

The Heaven and Hell party is hosted at two nightclubs: Garfinkel’s and the Savage Beagle. Sweatshop Union will fire up the hell party at Garfinkel’s while Puff the Magic DJ will fly up the heaven party at Savage Beagle. Both bars will host a costume contest. One ticket gets you into two parties. Advance free tickets are available at Vanity and the Toonie Store. Otherwise, tickets are $10 at the door.