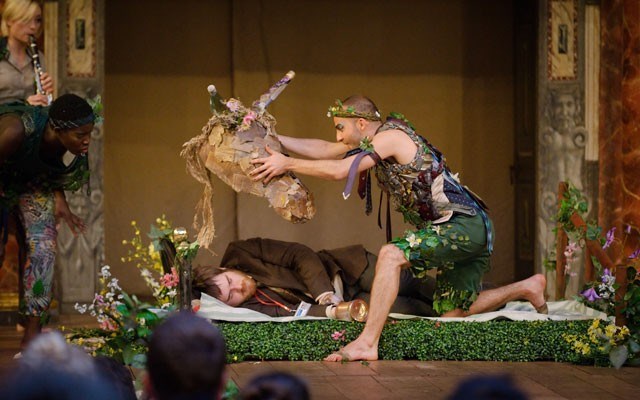 'What fools these mortals be' David Sands as Bottom (sleeping) and Alim Jayda as Puck in the London Globe Theatre's 2014 production of A Midsummer Night's Dream. Photo courtesy of Shakespeare's Globe Theatre

The Whistler Arts Council (WAC) is launching its fall and winter 2014-2015 Performance Series season with Shakespeare's A Midsummer Night's Dream on film.

The film comes from the summer 2014 production from the Globe Theatre in London.

Bottom, of course, is one of the main comical characters in A Midsummer Night's Dream, the tale of four runaway lovers and their misadventures in the kingdom of the fairies.

It is one of three Globe Theatre plays by the Bard being put on at Millennium Place. The others are Macbeth (Wednesday, Jan. 14) and Twelfth Night (Wednesday, March 25).

The public will be able to have ale and a meat pie, to complete this Shakespearean experience, thanks to changes to liquor license laws.

Lucie Lareau, senior manager of events and programming, says the arts council is excited by the variety of shows they've been able to offer residents and visitors alike.

"This year we are trying something new with Shakespeare," Lareau says. "But we are also bringing in shows for younger audiences, like Tokyo Police Club."

The Ontario indie-rock band are part of a triple bill with Said the Whale and The Pack A.D., performing at Millennium Place on Wednesday, Nov. 12.

Over the winter season, there will be one big live WAC performance a month, says Lareau, whether it be music, comedy or theatre.

"And we're also working with the people who brought the Chairlift Review to GO Fest for a Christmas special," Lareau says.

The Chairlift Review is a popular Whistler tradition of short skits, all taking place on a chairlift going up the mountain. This is the first time it has been put on at Christmas.

Other planned shows include African a capella singers Black Umfolosi on Sunday, Dec. 7; blues singer-songwriters Harpoonist and the Axe Murderer on Friday, Jan. 30; and Monster Theatre with the children's classic The Little Prince on Saturday, Feb. 21.

For more information on concerts and to buy tickets, visit www.whistlerartscouncil.com.

Arts council community programmer Rebecca Smith said this is the second fall that WAC has offered a full program of arts and design classes.

"There are a variety of educational artistic opportunities for kids, youth and adults," Smith says.

Painting instructor Lisa Geddes is back by popular demand to teach an acrylic painting class.

"It's good to see that courses are doing well and we can bring them back," Smith says.

But she adds she also likes to pull in more innovative courses, such as their new robotics class.

"(Twelve to 16 year olds) learn to build beetle-bots. It's a robot that can detect obstacles in its way," she says.

There is also a jewelry-making workshop for adults with designer Shelby Miller, which was brought in this fall after requests at previous workshops.

"That's going to be an exciting workshop because of the hand-forging techniques, hammering and getting textures into silver and using semi-precious stones as well. By the end of the day, they will have a pair of earrings and a necklace and a pendant made," says Smith.

Smith says the creative programs are getting more attention.

"Our goal is to teach people skills and have them continue exploring at home," she says. "People now look to us for opportunities for things to do with the kids or for themselves."

Interestingly, Smith says that while the participants for such classes are local residents and workers, visitors looking for something else to do during the ski season also latch onto the classes.

"We have drop-in classes and there can be a 30 per cent attendance rate from visitors... Last year we had someone take our painting class who was here for a three-week snowboarding holiday. They were looking for something to do in the evenings," she says.

For more on WAC fall art and design classes, including prices and registration, visit www.whistlerartscouncil.com/events/fall-2014-art-and-design-classes.