The word performer and his band The Short Story Long perform at Whistler Olympic Plaza on Aug. 28
Aug 19, 2015 6:00 PM By: Cathryn Atkinson 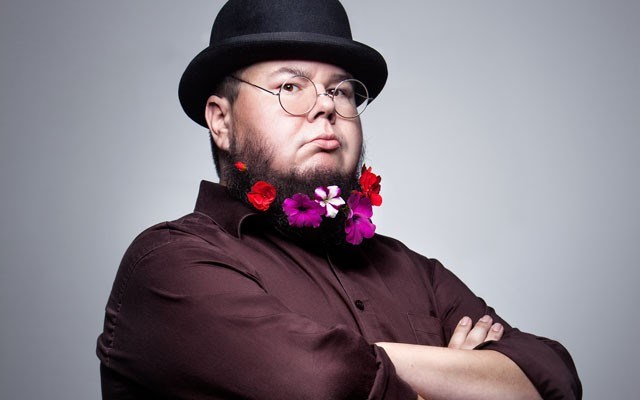 On Canada Day this year, performance poet Shane Koyczan put out a long message on Facebook that stirred a lot of interest.

In it, he explained that each year in May he gets swamped with requests for Canada Day performances of "We Are More," the stirring ode to this country which Koyczan read to millions during the Opening Ceremony of the 2010 Winter Olympics.

"The awful truth is that our cultural identity is undergoing radical plastic surgery, and I'm not sure what country I'm looking at anymore... The Canada we have now is run by criminals and big business. Politicians who have the power to vote up their own salaries. Parties who cut social programs, but spend millions of tax dollars on partisan ads trying to convince us that they're doing a good job...

"Enjoy the (Canada Day) festivities and be proud, but please remember that we have work to do. Change does not manifest without our participation. My Canada Day will be at the next election."

Asked about it six weeks later in an interview, Koyczan says he is reluctant to call out specific politicians.

"Change doesn't happen by sitting around and twiddling your thumbs. I'm a poet, not a politician. I took poli-science in university and then I changed to poetry. That was my career choice," he laughs.

"I don't want to be part of a political game, I don't want to be that person who tells people how to vote or what to do with their vote. I think everyone should investigate themselves. For me, I've got this really heavy pit-of-my-stomach sick feeling about what is going on in the country. I couldn't just say nothing."

'Dear Ocean,' the latest piece Koyczan has put out, doesn't tell people how to vote; instead he wants people to fill in their ballot papers come election day.

That he cares is clear. Koyczan's spoken-word poetry is filled with passionate declaiming. But he is not a rapper, he's a spoken-word poet who puts his poetry to contemporary music. That he makes it succeed as a career is something as rare as a unicorn trotting down Main Street.

He and his band since 2006, The Short Story Long, are performing a free concert as part of the Whistler Presents Summer Concert Series at Whistler Olympic Plaza on Friday, Aug. 28, at 7:30 p.m.

In a recent interview with an American newspaper, he said what he wanted most in his poetry and performances was a sense of connection with others.

Then there is the mentality of being Canadian and making a living out of the arts.

"A lot of it is the fans. We have passionate fans. I just got a message from a guy who wanted to know if there were tickets to our L.A. show because he wants to fly in from Atlanta for it!" he says, with more than a hint of incredulity.

"You want to fly halfway around the country for a poetry show? That's crazy. When I was in London, people were travelling from different European countries... It's pretty crazy to me.

"Working with the band has been one of the best projects I've been a part of. I love that I can hold people's attention with words, but music adds a different element. Try watching a movie without music.

"The music helps me to get to those emotional places. A lot of the time it's hard."

The last album by Koyczan and the Short Story Long was Remembrance Year (2011).

"It's been a while since we put out an album. We really took our time with this one. We wanted to put out something that was a more sterling offering and this is certainly that. I'm pretty excited about this one," he says.

And while Remembrance Year had a consistent theme about memory, their latest album, Debris, is more an exchange of empathy, Koyczan says.

He has been very open about the way depression has impacted his life.

"Throughout my life I've seen certain patterns and realized that sympathy isn't really useful to me. What has been more valuable has been those people who have been willing to go down to those certain levels with you, like when you're in a depression, and those people pull you back," he explains.

"I wanted to write something to honour that camaraderie... I call them '4 a.m. friends;' they are people who will answer their phones when they know it is you and they know that you are probably in trouble."

Koyczan says Debris has become a project that he could see as a film score. He previously turned one of his books into an opera for the Vancouver Opera.

"I have video ideas for each of song in Debris and it would be great to thread them together with a story attached."

Debris will be released on Koyczan's website (www.shanekoyczan.com) on Sept. 23.