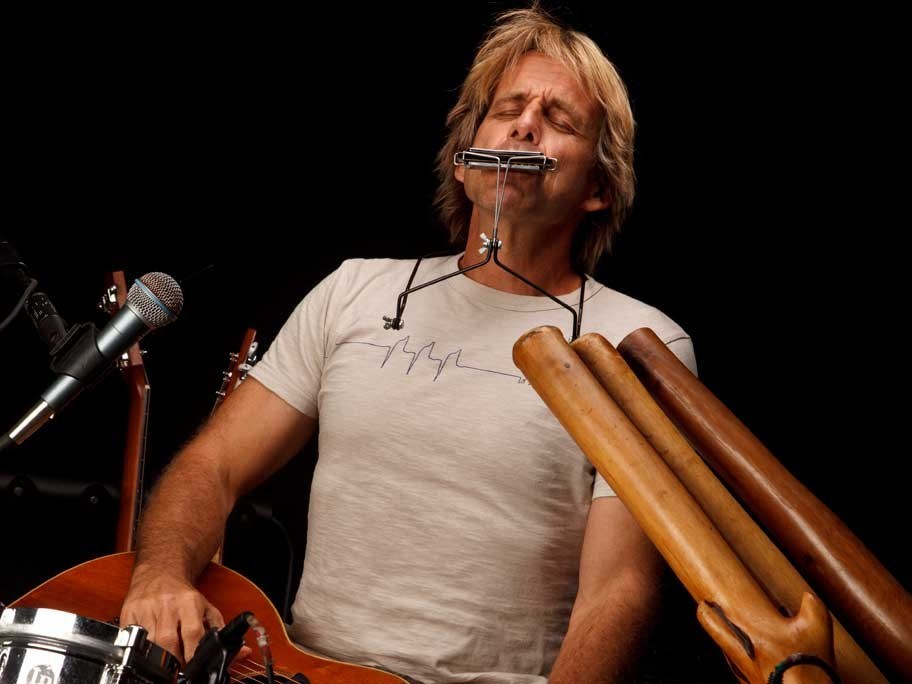 Shane Philip is conducting an illegal interview. He's talking while driving from Courtenay to Victoria on Vancouver Island — without a hands-free head set. As this sort of behaviour is not tolerated in British Columbia, Philip is brandishing an image few of his fans may have seen — that of a brazen lawbreaker.

"This will make me look like a total badass," he says. "Maybe that's a good thing."

Judging from Philip's music though, he's anything but a badass. The primordial walloping of his live show paints the man as a pagan-inspired, nature-loving hippie or an eccentric, unfairly talented multi-instrumentalist.

Or all things at once. His latest album, life. love. music. blends elements of Australian tribalism, reggae, hard rock, blues with slightly demented folk and condenses them all into 12 digestible pop songs. The album is largely influenced by becoming a father, of owning a house and starting a family. He hasn't written lullabies for his baby boy or anything — the influence has been more in his approach to music, in expressing the unexplainable aspects of being a parent, of the joy and love that can't really be articulated through words. life. love. music. is a reflection of a nature-loving hippie finding comfort in his middle age.

"My music evolves from domestication, I suppose," he says with a laugh.

On stage he plays no less than a dozen instruments — not all at once, of course, but hammering out speedy tribal beats while playing the didgeridoo is the normal course of action. His eclecticism has won him a throng of loyal fans throughout Vancouver Island, but for whatever reason, people always remember that didgeridoo.

"I play all these instruments but everyone always says I'm the didge player," he says, sounding a little disappointed. After all this time spent learning the multitudes of instruments (all on his own, mind you), his skills have been narrowly focused on just one element.

Philip has just started on a winter tour, playing shows across Western Canada that includes a coveted slot opening for the Wailers, Bob Marley's former backing band, in Vancouver. A life-long Marley fan, the chance to share a stage with reggae legends would have seemed like an impossible dream a decade ago, when Philip was still teaching school kids on Quadra Island.

He'd write songs for his students as a way for them to remember the lessons, and for him to have more fun teaching them. The songs seemed to infect the students, who'd sing them outside of the classroom — think about it; kids embracing school outside the classroom? — and one of his colleagues said that he should quit teaching and become a full-time musician.

So, at 40 years old, with limited experience in the music industry and no clear idea as to how he'd make a living, he gave up his career and became a full-time musician.

"It's one thing to change a career to pursue a better livelihood and that," he says, "but this was the first time I'd dived into something with no sense as to how well I was going to do — if I was going to make money or if I was going to be one of those typical starving musicians."

But it hasn't been much of a problem. First, he says that when he takes something on, he gives himself over to it completely. The music basically consumed him. Thankfully, his music tapped — and still taps — into the primal urge to dance, to love, to shout for joy — an agreeable philosophy that exists in abundance throughout Vancouver Island. He found a loyal fan base throughout the province. Finding a steady gig hasn't been a problem.

But if the fans only knew about his brazen badass ways. If they only knew...

Shane Philip is playing the first SERF concert of the year. Tickets are available at Trinity Romance and Howe Sound Brewing for $15.