Also in arts news briefs: Tea and Tales kicks off at the Pemberton Museum; Amped in the Park to bring performers to Squamish
Jun 29, 2018 9:00 PM By: Alyssa Noel 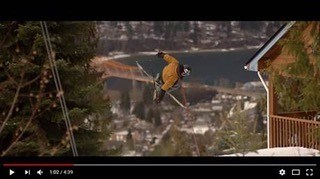 Their short film, created in conjunction with The North Face, Imagination: Tom Wallisch, earned them a Cannes Lion, which awards the best in the creative and marketing communications industry. More specifically, they were given a Silver Lion in the Film Craft – Direction category.

Viewed over four million times since it was released in October 2017, the film features a kid in the back of his family’s station wagon daydreaming about skiing the urban landscape of Nelson when he spots skier Tom Wallisch doing just that outside the window.

The piece was inspired by a creative concept from the late JP Auclair, who died in an avalanche in 2014.

According to the jury president Diane McArter, the jury, “connected with the realism” in the film. “The complexity was not your takeaway,” she said, in a release. “It became invisible. We were transported into that little boy’s world, and his imagination.”

“We have to thank JP Auclair and Landon Basset (from The North Face) for pulling strings from the heavens (not to mention writing and executive producing the film),” he added. “None of this would … have happened without them. Also, a massive thanks to the whole The North Face and Sherpas family who brought it all to life. It is phenomenal for us to be rewarded so wonderfully after everyone’s tireless efforts.”

Tea and tales kicks off

The Pemberton Museum’s annual Tea & Tales speaker series is set to return on July 10, running every Tuesday until Aug. 21.

The event runs from 2 p.m. until 4 p.m. and $2 admission will snag you tea, treats and a historical story from local presenters from Lillooet, Mt. Currie, Squamish and beyond.

The general theme this year is “Myths & Legends.” To kick it off on July 10, George Vanderwolf—a prospector, game guide, trapper, rancher and construction foreman from Lillooet—will present “The Legend of the Lillooet Cattle Drive 1872-1873.”

If you find yourself in Squamish on a Thursday night this summer, you can swing by downtown’s Junction Park to check out a rotating group of local musicians and performers.

Starting on July 5, the Squamish Arts Council is hosting Amped in the Park, an open mic-type event for both musicians and other performers—ranging from poetry to comedy and theatre. The shows will run throughout the summer starting at 7 p.m. until Aug. 30.

Performers can sign up online to play a 10 to 20 minute set. The only requirements are they must consider themselves emerging artist and come prepared with their own instruments and music.

Volunteers are also still welcome to sign up. For more visit squamishartscouncil.com/amped-in-the-park.