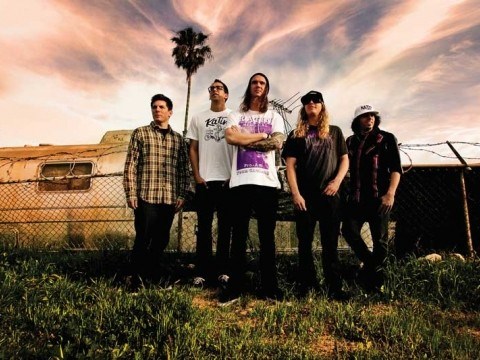 Who: The Dirty Heads

Southern California - or "So-Cal" - has churned out some very distinct musical sounds over the years. The area is home of the G-funk era and regulators like Warren G, Nate Dogg and Snoop Dogg, plus the punk-and-reggae-influenced rock epitomized by Sublime.

And that So-Cal sound continues to evolve today, as bands like The Dirty Heads step into the studio to produce organic and inspired tracks like Lay Me Down.

Haven't heard it yet? Recorded with Sublime's new lead singer and guitarist, Rome, it was getting a lot of radio play when it was released. It's also featured on the special edition of The Dirty Heads' Any Port In A Storm , which dropped earlier this year.

"We wrote Lay Me Down in Duddy's backyard drinking beer one day, just messin' around," Jared Watson recalled. "(Rome) didn't even come over to write the song, he just came over because Duddy was havin' a barbecue!"

Watson, vocalist and guitarist for The Dirty Heads, is also one of the founding members of the band. He and Dustin "Duddy" Bushnell first crossed paths at a party during high school.

"I wasn't doing anything with music at all," he recalled. "I was a freshman, he was a sophomore and he was in a punk band. I had never touched a guitar, I had never sang, I had never rapped - I'd never done anything!"

They were also all into the reggae scene: they had dreads, were 420-friendly, and loved to listen to Sublime, 311 and Bob Marley.

"So we started writing these funny raps and Duddy was a really good guitar player, and he was like, 'Hey man, we should try and write some normal songs!'" he recalled. "...We weren't even The Dirty Heads back then - we were just two kids having fun."

Later on, when they were about 21, they added percussionist Jon Olazabal, drummer Matt Ochoa and bassist David Foral into the mix, solidifying their sound in the process. Soon, they were selling out their small, acoustic shows and recording a "Dirty Demo."

The past two years have been huge for the Heads: not only have they been basically touring non-stop but they were named by Rolling Stone Magazine as one of the "Best New Bands of 2010" and honoured as the "Best Reggae Rockers," a title that came as a complete surprise to the laidback musicians.

"That was why it was so surprising and so cool was that we didn't get a heads up until we saw it, and I can't remember who called me, but someone called me and was like, 'Hey, have you seen the new Rolling Stone?' and I was like, "No. Why?'" he laughed.

"Rolling Stone is a very critical mag; they criticize everybody! Unless you're Bono or Jay Z or Bob Dylan or frickin' Tom Petty, you're kinda going to get bashed, and I've read some reviews on other reggae rock bands that weren't too nice. So for us to get that, it was really cool!"

While Watson and Bushnell have been making music for the past 14 years, they've mainly stayed on the underground scene, only recently venturing into the mainstream.

They've only been on the tour circuit for four or five years, and as Watson points out, a lot of bands take up seven to 10 years to get to that point. This summer, they've been hitting the road - hard - touring across North America with Sublime and doing loads of club and festival shows.

"It's probably the funnest tour we've ever done, just because we know them... it's just like one big family because we already knew everybody from home," Watson said.

"...And the shows have been amazing! We thought it would be a lot of us playing for Sublime fans, but surprisingly - our fans have grown - so there's a lot of Dirty Heads at the shows!"

And they aren't done yet. They have more than 30 gigs booked between now and the beginning of November, including three stops in Canada, and one in Squamish, as they perform at the LIVE At Squamish festival this coming Sunday.

"We played Vancouver in the Warped Tour and it was one of the coolest cities that we've been to. Every time we go to Canada, we fall in love again because it's just so rad - either with a girl or with actually just Canada because it's so cool."