Something for every ear

The Canadian Tenors and The Celtic Divas deliver eclectic evening of Celtic, folk, Christmas, pop, classical and opera
Dec 14, 2007 9:47 AM By: Nicole Fitzgerald 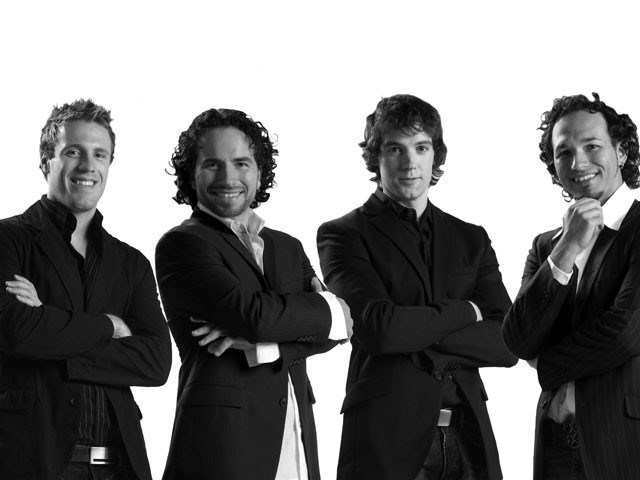 From Opera to Pop The Canadian Tenors perform in A Christmas to Remember.

Who: The Canadian Tenors

The Canadian Tenors have received numerous compliments on their performances.

They recently performed for former U.S. President Bill Clinton in Toronto and shared the stage with multiple-Juno-Award-winner Rita MacNeil in Victoria.

They’ve been described as “Canada’s national treasure” and worked with Grammy-Award-winning producers who have produced for the likes of Nelly Furtado and Sarah Brightman.

But the biggest compliment to date for the handsome four, at least for Victor Micallef, was from the music world’s hardest critic — Micallef’s brother, who is an electrician.

“There seems to be something for everyone in the show,” Micallef explained. “Even my brother who is an electrician who doesn’t come out for music events came back stage to say what a great time he had. To hear that from him is the biggest compliment.”

Electricians, construction workers, teachers, lawyers and doctors alike are invited to enjoy this accessible evening of classical, opera, pop and folk on Thursday, Dec. 13 and Friday, Dec. 14 at 8 p.m. at MY Millennium Place.

If you are an opera fan, you’ll love it.

If you don’t like classical music, don’t worry; the repertoire moves through multiple music genres.

If pop isn’t your thing, who knows, maybe you will discover a whole new side to your musical tastes.

The Canadian Tenors call their music many things: opera, contemporary, pop and folk. But most of all, they call their show a singing one.

“It’s a singing show,” Micallef said. “We like to have a good time up there. It’s not a chin up, nose up performance. We talk on stage as if we were talking amongst ourselves. One of the responses we always get is that people feel like they are stepping into a living room. We keep things a little off the cuff. We improvise to keep it fresh. It’s about getting people right on stage with us.”

The foursome was the result of an eight-month, cross-Canada casting call a year ago where three of the four (Micallef, Remigio Pereira and Fraser Walters) were recruited from national theatre tours, the Canadian Opera Company, a Grammy-Award-winning vocal group and national and international recital performances. Jamie McKnight joined the group four months ago to be in on the recording of the group’s debut album, which was produced by world-renowned Swedish producer Quiz and Larossi of Diana Ross fame. Also involved were Grammy-Award-winner Steve Thompson, who worked with Madonna and Guns ’n’ Roses, and Juno-Award-winner Jeff Wolpert, who worked with Loreena McKennitt and Nelly Furtado.

“We’ve worked with a couple of orchestras, including the Swedish and Moscow symphony orchestras,” Micallef said. “Hearing the tracks has been really exciting… Jamie has been a great fit. He was at the Stratford Festival, so we’ve been waiting for his contract to end.”

Like the Canadian Tenors’ music, the singers’ backgrounds vary, ranging from musical theatre to lead roles in classical operas.

“We all have different sized voices and colours, but they all just fit for some reason,” Micallef said.

Christmas music will also work its way into the Canadian Tenor mix. The group is currently touring their A Christmas to Remember Concert, which will be followed up with their album release tour in the new year with dates in Europe, Asia and North America.

“Pavarotti and the Three Tenors really brought (classical/opera music) to the masses and opened a lot of ears,” Micallef said. “For some people, opera is a new passion, and for others, they can’t acquire the taste. A show like this is not overwhelming; it has spurts of classical pieces, spurts of folk, so your ears are always fresh. It’s not a four-hour Wagner opera.”

The Celtic Divas, starring Lord of the Dance soprano Deidre Shannon, will also bring a Celtic twist to the evening.