Spotlight on local music: Kill Me Thrill Me 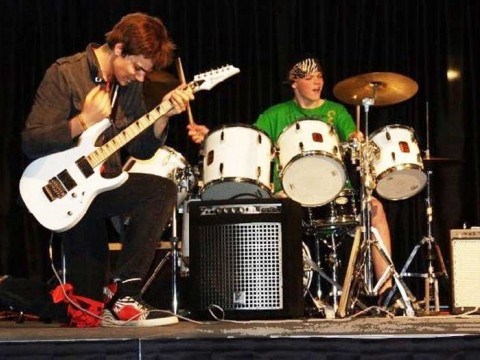 Pique: How did Kill Me Thrill Me come into being?

KMTM: Shawn was just kicking it around on the drums; this got the attention of Dylan Morris (Keyboard) and Kyle Macdonald who joined him. When that group was together Dylan left for college at short notice and Lukas Lynn came along around the same time, followed by Dylan Lincoln (Vocals) and Harlan Sim (Guitar), who left after a few gigs. Today, the group is a three-piece band known as Kill Me Thrill Me.

Pique: Tell me about the music you guys are making; is it all original rock and roll, or have you guys put a different twist on things?

KMTM: If I had to use one word I'd call it rock. But it's influenced by punk, melodic rock, classic rock and even trash rock, but in an old school sense. However we do definitely have a unique and completely original twist in how we play.

Pique: Tell me about one of the songs you have written, and describe the basic meaning behind the lyrics.

KMTM: Kyle wrote the lyrics for Blood Red Dawn, which has been our most popular single yet. It's actually about a guy at a raging party who gets drugged and killed by his ex-girlfriend. It tells the story from his perspective, lying on the ground bleeding to death. Heavy as the theme is, the rhythms of the song (which was written Lukas and Shawn) are actually fairly upbeat, though it's a quite powerful metaphor: "Dark things can happen in upbeat places." Luckily, the song is fictional, though most of our other songs are based on personal experiences.

Pique: I understand that your group has a few interesting quirks; so what makes you guys stand out from the pack?

LL: Me building amps from scratch is what I would call a little quirky; building an amp is too complicated to even begin to explain. And LYNN RT5 took months to build, but with the shoddy craftsmanship of affordable amps and an insane price tag of well-built amps, I was motivated to try and build my own. And the beautiful howling cry from that amp is well worth it. Listen to the solo in Too Ironic To Be True and I'm sure you'll agree.

I guess how we all play with an interesting style is kind of rad, as well. Our styles are what most would call unconventional - we all taught ourselves to play our instruments, we seldom play by the book because we were never taught it, and that makes us original. The same thing goes for production; I just bought some budget gear and winged it. We had no prior knowledge of how complicated producing an album would be or what we were getting into. Also, we are all multi-instrumentalists: all of us can play guitar/bass/keyboard/and sing, to some extent. Kyle plays drums, as well. Our live lineup is based on our strengths, but we could easily swap instruments at any time, making us very versatile.

Pique: Lukas, you mentioned returning to a time when "rock was everything." Is that the ultimate vision of the group?

LL: Yeah, I would say, our vision is to bring music back to the decades when rock was "The Genre." Those were the years of legendary bands and musicians ('60s to '80s). I think rock in the 21st century is having a tough time; it's either broken up into hundreds of subgenres or getting snuffed out by other more popular ones. Don't get us wrong - we listen and respect all kinds of music, but we're old school and we'd rather change music than have music change us.

Pique: Name a few of your most important musical influences.

Pique: You've all attended Whistler Secondary School, so chances are some of you were born and raised in Whistler. What are your thoughts on the local music scene?

KMTM: The scene is pretty decent, with local cover bands and originals: The Hairfarmers, Sean Rose, Whole Lotta Led, Spy vs. Spy, Brother Twang, Ali Milner, Animal Nation, and Gnar Boots. We are in good company and a lot of people in Whistler are musically interested. However, there is no competition for youth rock bands in Whistler, and although youth DJs like Cooper Saver, Conner Mcaffrey, Simon Dartios, Marco Abel-Denee, and Robin Wenger have been trying to make a difference with the local youth music scene along with us, it's been difficult. Vancouver has a youth scene and Squamish has a youth scene. In Whistler, we don't have a good one, if any at all, so we have to create it. It would be easy enough to just play in the youth band-friendly Vancouver, which is bustling with youth contests and festivals. But I could never leave Whistler knowing there's no easy opportunities for bands up here. It's in all of our hands, all we have to do is realize that there is great talent in our youth and create some opportunities; they/we will rise to the occasion.

Pique: What do you hope that Kill Me Thrill Me can add to the musical landscape?

KMTM: We want to encourage other kids to start playing and to create and join bands, and create a youth music scene in Whistler. Having an impact on the music scene is huge, and we would love to blaze a trail for the youth of today. For us, a youth movement like that is what dreams are made of.

Pique: I understand you recently won the WSS's Whistler's Got Talent competition; can you tell me a bit about that experience?

KMTM: It was loads of fun! I think that everyone digged it. We left the stage sweaty and exhausted to be greeted with, "Dude, that rocked" and "You guys are the greatest!" It was by far our best gig yet. Hopefully it inspired some people. Of course, not everyone can be a fan, but from what we've seen at Whistler Secondary School, I think we could gather a pretty good local following.

Pique: Who were you up against?

KMTM: Vocalists and dancers mostly, nothing really comparable, but great acts nonetheless. The Audience Choice award actually went to a dance routine of S Club 7, but then again, who wouldn't vote for a bunch of hot grads dancing around in fluorescent tights? So, as you can imagine, a rock act like ours seemed a little out of place.

Pique: The judging panel consisted of Ashleigh McIvor, Robjn Taylor and Ali Milner; what kind of feedback did they offer on your performance?

KMTM: It's a little vague, I was a little too stoked on life to remember too well! But I remember them giving us kudos for writing our own songs and commenting on how our live performance of Blood Red Dawn won them over. They told us never to quit trying.

Pique: What did you guys win?

KMTM: $25 at Creekbread and a trophy which was a dancing Elmo in a chicken suit glued to a wooden platform, which seems kinda whacked, but hey, how many other bands have a trophy that sings and dances? Yeah, that's what I thought.

Pique: So, what's the next goal? I know you want to get some love from the local crowd, but it might be tough to book gigs in bars right away; how do you hope to work around that?

KMTM: Local fame would be great, of course, and we need gigs to achieve that. And actually we can play at bars, it's an in through the backdoor, out through the backdoor routine. The bars are in charge, so it's different from place to place, but most often if we don't drink we could play. We have yet to get a gig in a bar though; we've been trying to get in touch with promoters.

KMTM: Crankworx would be "The Dream Gig." The punky feel of Crankworx is great for us; we definitely have some punky songs and we can get crazy on stage.

Pique: You've also been busy recording in your "barebones" studio at home; can you tell me a bit about the setup you guys have going?

KMTM: Actually, Studio 1 is hidden in the school's drama/music room, which is tricky because the room is busy most days and we can't use it on weekends. Basically, our set up is an M-Audio Fast Track preamp with budget vocal mics for the drums and stock Garage Band on the school's Macbook. We also ran out of money for mic stands for the drums, so mics are duct taped to any object capable of holding it in the right place. It's a pretty comical sight. And when it comes to improving it, sponsorship has become the word of the day. We've already spent every penny we've had on music and despite it being the most barebones studio we could possibly use, we've actually got some great recording from this setup.

Pique: Does that mean you've got a debut album in the works? Tell me a bit about that project.

KMTM: We have our debut album called Studio 1 coming out May 26. Some demos of songs are already on our MySpace (www.myspace.com/killmethrillmetheband). They are being perfected for the release, but the original versions should give you a taste of what's to come. Again another thing about the Whistler scene is there's no local music store, and producing and marketing your own album isn't easy, though I'll try to get some local shops to carry it.