The members: Darren Chambo & Matt Graham, live jam bay player, Lee Finkle Hometowns: Peterborough, Ontario. How did you meet? We have known each other now for about five years. It all started on a cold night in Omemee, New Year’s Eve.
May 30, 2008 4:40 AM By: Pique Newsmagazine Staff 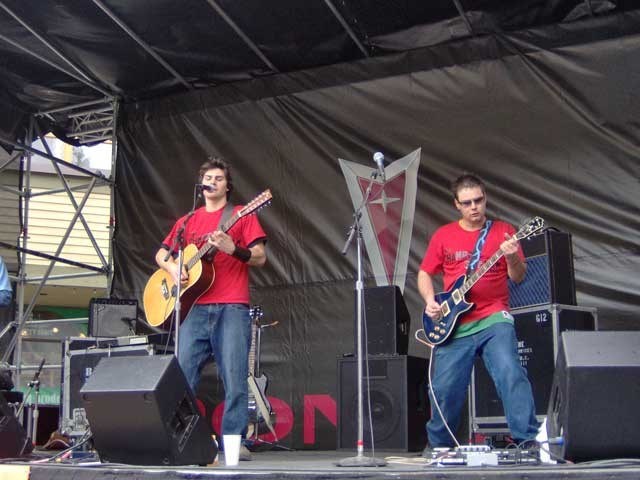 How did you meet?

We have known each other now for about five years. It all started on a cold night in Omemee, New Year’s Eve. A mutual friend approached the both of us and said “Man, I know a guy that has a similar style and a similar dream of Rock ’n’ Roll.” We met, jammed for a bit and rang in New Year’s. We both went back to school and did our own things not thinking twice about it. A year later, through the mutual friend again… we met in Whistler and ended up living in what we called The Cabin in the Woods on Drifter Way, where every night was an open jam with four guitars, harmonicas and other instruments. From here The Chambo Graham Show was born, with our first show being one of the last shows ever played at the Boot Pub.

What are your musical backgrounds?

We have always loved music and been passionate about it. We have been going strong now for over a decade of our lives and have had a guitar in our hands many, many years before that. Two to three hours a day over a decade is a long time. Through our teenage years and even as we now ripen into adulthood we have always played and written music. A natural love of it is what keeps us doing it everyday.

Matt: Around the age of 12 years old I bought a Fender Strat through layaway with the money I saved from my paper route. The same guitar Jimi Hendrix played, who I idolized so much at that age.

What brought you to Whistler?

The entire mountain lifestyle is what we think this life is about. Live it to the fullest and we feel like we do that here. Snowboarding, fishing, camping, kayaking, canoeing, cliff jumping, rope swinging, bungee jumping and many other things you could never access from anywhere else. We are here because we live in paradise and are on vacation at least 104 days a year, free from the stresses and chaos in the cities and surrounded by nothing but forest and nature. We could be making a lot more money somewhere else but you cannot put a price on the life we live here.

When you aren't on stage, where can people find you just hanging out?

The winter months, on the mountain. With the summer season coming up we will spend a good number of days on Alpha Lake throwing the football and jamming out on the beach. Lillooet Lake, the hot springs, One Duck Lake rope swing and wiffle golf are a few other of our hang times. Last week we caught a bike release video at the GLC and saw Shane Phillips rocking out with like five things going at once, it was sweet. A pint after work normally goes down at the Amsterdam or Brewhouse. We just go with the flow. Besides that we are practising, writing or anything else we can dream up that day.

How do you describe your music?

Our music is a creation of different things we have either experienced, thought, represent and believe in, and or dreamt up and aspire to be. It is art and what we do. Most lyrics are upbeat and inspirational, however we have written pieces about tough times in our life. We try not to be labeled, but if we were to be, (we’d) probably (be) alternative rock.

Set the time. The place. Grab a 12-pack, some Gatorade, licorice, then set up. Sound check and get a good vibe going. Set it all down. Walk away. Have a beer tell some stories talk about what to do next and where and how to take the show further and better tomorrow. Practice back flips off a deck on a mattress, for a future move during a show. Go back in and rock ’n’ roll for about three to four hours straight. All new rehearsal songs get stopped at least four to five times, debated, then go in the direction we chose to send them. They are always meant to be fun but some of our greatest realizations and creations have come from some of our longest debates about what direction to take the song.

Who are your musical influences?

Metallica, CSNY, Led Zeppelin, The Eagles, Doc Watson, The Doors, Jimi Hendrix, Eric Clapton, Iron Maiden, Motley Crue, Aerosmith and so many, many more we have to stop to not leave anymore out. All music has its own purpose and influence and rock ’n’ roll will live on forever. A quote from Alan Cross states, “If you are between the ages of 25 and 30 you have most likely heard over 800,000 songs in your life.” Or something like that.