Members : Jammin' Jeremy Thom - guitar/lead vocals Mike from Montreal - bass/backups Phil T. Beats - percussion/backups Where did the name The Rising Tide come from? Jeremy Thom: We were in Tofino that epic day.
Nov 14, 2008 7:56 AM By: Pique Newsmagazine Staff 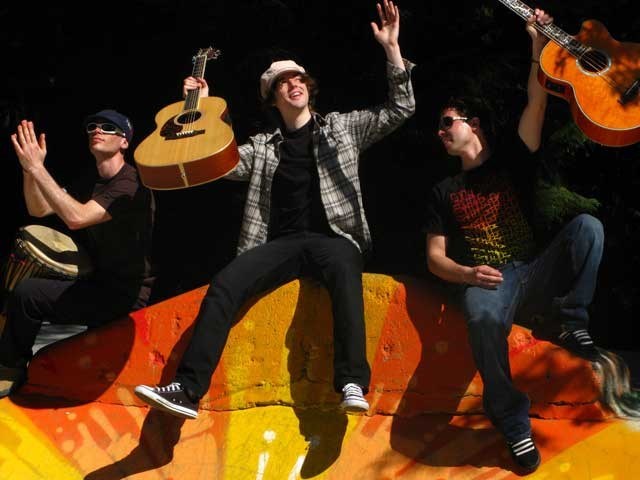 Where did the name The Rising Tide come from?

Jeremy Thom: We were in Tofino that epic day. The sun was shining bright, the waves begging for boards. A seven-foot barrel breaks right at the perfect time, and we all drop in, single-file. As we're riding out the wave, Mike cuts back and yells out in his Tony Danza voice, "ay-oh, oh-ay, look up!" We all looked up in the sky, and perfectly formed in the clouds were the words "The Rising Tide." Well, that's how I remember it anyways.

What are your musical backgrounds?

JT: I played in a couple of bands in Whistler before this, Truth Be Told and Forever Ends. The Rising Tide is like a breath of fresh air for me though, the band and the new style represents a bigger change in my life. Phil has played with just about every musician in Whistler over the last six years, and was a member of Kostaman And The Vibrations for about four years. Mike's played with a few people in his hometown, but this is his first band in Whistler.

JT: I am from here and there; Hinton, Slave Lake, Edmonton, Mississauga, Thunder Bay, Edmonton again, and Ottawa. Actually I've lived in Whistler longer than I've lived anywhere else.

Mike From Montreal is not actually from Montreal, and neither is Phil. Okay, yes they are.

What brought you to Whistler?

When you aren’t on stage, where can people find you?

JT: When we're not writing or playing music; skateboarding, snowboarding, surfing, biking, rope swinging, cliff jumping, hanging out at the lake, and raisin' the roof.

How did you end up making music together?

Well, we've all been in Whistler for about six years, but Mike and I met each other about a year ago at Black's Pub jam night. We knew Phil already and his style was a perfect match for what we were planning. I'd already been recording my solo album when we met. That album became of secondary importance fairly quickly, and we began recording The Rising Tide. We expect to be done the album early next year.

Do you play covers, or all original material?

I've spent years writing these songs; I was writing them even when my other bands were still together. All of my bands have been original bands; that's what I believe in. We do a couple of covers here and there to keep things fun, but songwriting is definitely one of our strengths.

How do you describe your music?

I'm Marky Mark, and Mike and Phil are The Funky Bunch.

There aren't really any "typical" rehearsals. We jam in different places, and are usually working on new material. I guess there are a couple of things that are consistent; good times and a sense of accomplishment.

I find that I enjoy listening to music the most when I’m driving – what’s on heavy rotation in your car (or on your iPod)?

My CD player and all my CDs got stolen out of my truck, but lately I've been listening to a lot of Blind Melon. I usually listen to a wide variety of music like Ben Harper, Bedouin Soundclash, The Mad Caddies, No Use For A Name, Hayden, Blacksheep, The Planet Smashers, Face To Face, Bullets For My Valentine... to name a few. Mike and Phil are into the Chili Peppers, Pearl Jam, The Beastie Boys and basically anything good.

What/who are your musical influences?

Some of the first bands that I was into were Eric's Trip, Minor Threat, Sick Of It All, The Youth Brigade, and a lot of heavy stuff like Sepultura and Slayer. Before that though when I was super young I was all about Young MC, Kris Kross, and Michael Jackson. Thank God I learned how to play an instrument.

If you have to pick one “theme song” for the band, what would it be?

Good Vibrations by The Beach Boys.

What song is requested most (that you secretly hate to perform)?

Well that's the beauty of managing ourselves, we don't have to do anything we don't want to.

What’s your favourite venue in town, and why?

The band agrees that we enjoy the outdoor gigs the best. The Village Gazebo on a weekend in the summer is one of my favourite gigs, but if I had to pick an indoor venue I'd say The Boot. Ya, I know it no longer exists, but it's still my favourite.

What musician (alive or dead) would you like to jam with?

I understand you guys had the chance to perform during Pemberton Festival – what was that like?

Ah, the dust shower. Next time, I'm bringing my goggles. On the serious side, though, it was an amazing festival just to be at, let alone perform. We all thought the Pemby Fest was the bees’ knees.

And you’re in the midst of recording your first full-length CD? Can you tell me a bit about that project?

We're recording it at my home studio with a fairly basic set up. Recording is something that I've done my whole life and in my opinion goes hand-in-hand with songwriting. Phil and Mike are some of the easiest people I've ever recorded with, we all know what needs to be done and are excited about doing it. You can hear some of the tracks we're working on at www.myspace.com/rockwhistler.

Any gigs on the horizon?

We're playing on Nov. 15 at the GLC with some amazing bands from out east. Also, we're putting on a show at Tommy Africa's on Nov. 19 with special guests Animal Nation.