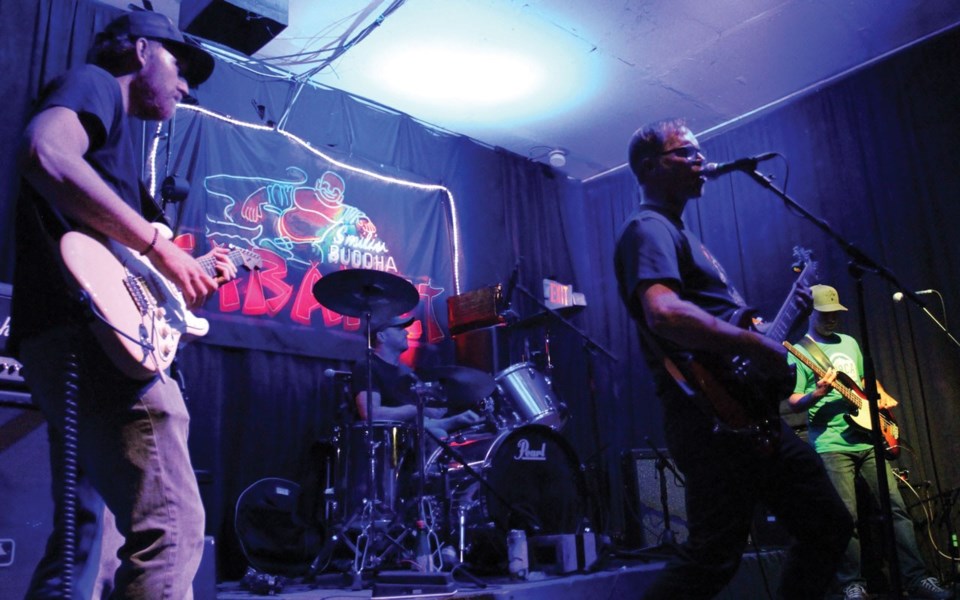 "In some respects, it was almost an accidental band," he says. "We'd been jamming in a studio for about a year fairly seriously. We started recording some original songs ... After writing and recording, we thought, 'We have to perform this somewhere.'"

So, the band, dubbed anonymericans, recruited a headlining band and put on a show, inadvertently launching Squamish Punk Night. Now, the series is celebrating its one-year anniversary with Squamish Punk Fest, running Sept. 27 and 28 at The Knotty Burl in Squamish, featuring 10 bands.

Pique caught up with Hudson over phone and email to chat more about what the last year has been like.

Pique: What's it been like running the event over the last year?

Paul Hudson: A lot of fun! We've met many people in Squamish's local music scene and made some great connections with the D.I.Y. punk scene in Vancouver over the past year. We've hosted five events in the past year in Squamish ranging from bigger established acts such as D.O.A. and the Dayglo Abortions. D.I.Y. acts out of Vancouver, including Russian Tim and Pavel Bures and a band from tiny little Roberts Creek called Modern Terror. In the summer time we decided to switch gears and have a ska-punk night featuring The Brass Action, Brehdren and Sweetleaf.

We've also connected with a Whistler band called Deadly Lethal Ninja Assassin who have been busy writing original music. We have a Squamish show planned with them in January 2020.

We are currently stacking our 2020 roster with bands from across Canada and even had some international interest from the UK.

Did you know what to expect when you first started out?

PH:I knew there was something there ... Places like Squamish, Whistler, Cumberland, and Rossland, a lot of people into extreme, outdoor adventure sports seem to have a bit of a history in punk rock. A lot have been skaters in the past. So, I think we knew we were tapping into that demographic. A lot of those folks are coming out to the shows, but there's a younger generation we didn't really know about. People in their 20s looking for it. We're drawing from a bunch of different generations.

Are you seeing people from Whistler coming up for the shows?

PH: I went to a lot of the punk shows at The Boot [a much-loved defunct Whistler bar] back in the day. I lived in Whistler for five years. Music has changed. All the festivals now, it's about hip hop and electronic [music]. Even big festivals like Coachella are having trouble getting headlining acts ... there aren't big, live, headlining acts like there were 10 or 15 years ago. That plays into a smaller level like Whistler.

We have people from Whistler that come down for our shows. We measure those stats on Facebook—who's coming from where. People do make the effort to come up from Vancouver, but we're finding people are coming from the Sunshine Coast and Abbotsford and Burnaby [for the upcoming festival]. It's a small, urban festival. It's not Squamish Fest, by any stretch, but it's a unique music event some people are interested in checking out.

Has it changed Squamish's punk scene? Who are you seeing in the crowd?

PH: Punk and various D.I.Y. shows have been happening in Squamish for a very long time but it's been sporadic. Some shows have been well attended and others not so much (they've taken place at Howe Sound Brew Pub, The former OP when it was around. Bad Religion even headlined the Squamish Fest back in 2010). Some of the past shows have been Wild West too.

The best way to describe the outdoor punk shows of the past would be to call them "generator parties." This is where you get a bunch of generators powered up in the woods, set up a makeshift stage and giver! There's something quite beautiful and original about that kind of event. In more recent times the former Mags 99 location has hosted some punk and punk-inspired shows, which have been fun. I mean, what says anarchy better than moshing in a taco shop, right?

I guess what we are doing is a little more traditional. We are hosting shows on a regular basis and in a club similar to what you might go to in Vancouver at a place like the Biltmore.

You mentioned you're planning shows into 2020 now?

PH:I get so many inquires from bands that are touring and a lot of times, they'll get a hold of me two or three weeks before they want to do a gig. We plan these out well in advance, so we're planning next year. What we want to do is have a mix of travelling Canadian bands, but we're open to anyone else who happens to be in the area, as well as the Sea to Sky. There are more alternative and punk bands forming in the corridor. It'd be great to give these bands some exposure.