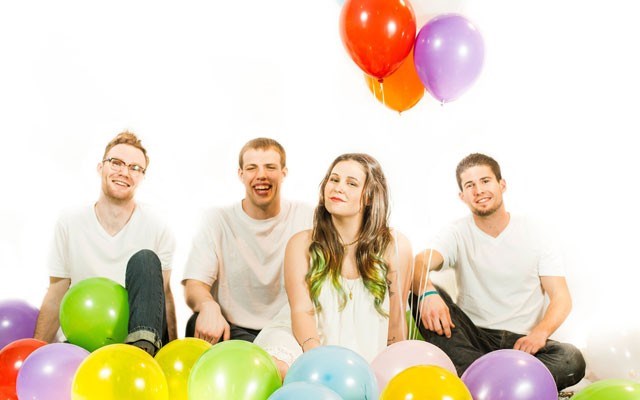 Scott Verbeek has already travelled a considerable distance from the early days of his musical career, as a prodigal teenage lead guitarist from Don Ross Secondary School in Squamish.

Back then, maybe five or six years ago, his metal band Black Swade got a lot of attention and released an album, were spotlighted by CBC radio, and made it to the Experience Music Project Sound Off Battle in Seattle.

Moving on, Verbeek graduated in May 2013 with honours from The Berklee College of Music in Boston with a Bachelor of Music in Jazz and Contemporary Music with a performance major. He tucked a four-year program into three years, thanks to a lot of summer school.

His new style has led to the creation of Verbeek's band, LOVECoast, which is playing in the free Outdoor Concert Series in Skier's Plaza as part of the World Ski and Snowboard Festival on Saturday, April 19, at 2:30 p.m.

"This is the first year LOVECoast is playing and it's exciting," Verbeek says. "We're hoping that lots of Squamish and Whistler people come out for the show... What we want from our set is to make sure everyone has a great time. We want them to dance when we play."

LOVECoast is made up of fellow Squamolean Danielle Sweeney on vocals, bassist Andrew Fraser, and drummer Jesse McNeill. Their sound infuses indie sensibilities with jazz-strong vocals.

They hope to have an EP out this summer and they are still working on it, Verbeek says. Many of their gigs are regional so far, which is unsurprising for a local band that is less than a year old. They hope to expand into a Western Canada tour this fall.

"We're performing a bunch of songs at WSSF that haven't been recorded yet and we're super excited about that," he says. "They've gone over very well in our live performances so far, and we ended up cutting some out after the show when they didn't work."

Verbeek says LOVECoast is all about old-school grooves.

"When I go out, I don't necessarily want to see a DJ. I want the sounds like Marvin Gaye, so we're trying to bring that with a modern twist," he says.

"My influences changed (compared to Black Swade). Danielle and I do a lot (of) older stuff. Guitar-wise, my heroes used to be Slash, the rock guys like Tom Morello. But now the guys I look up to more, play less and play with less distortion. They say more with their guitar."

Verbeek wrote the music for their song Heartspeak, which came out in March, while Sweeney contributed the lyrics.

"We're trying really hard to get people to hear our music. The last couple of shows we played, the audiences have been really receptive to our tunes," he says.

"We played Joe's Apartment on Granville (in Vancouver) last Friday, and that was one of the funnest gigs I've played in a while, just because we worked on upbeat stuff. We ramped up the set and the place was full, everyone was dancing. We had an awesome time."

He hopes for the same kind of set in Whistler.

Verbeek explains that the four members of LOVECoast live in three different cities. He remains in Squamish, Sweeney is in Vancouver, while Fraser and McNeill live across the water in Nanaimo.

"We have really intense rehearsals. Everybody comes to one place and we practice for eight or 10 hours. We're doing this every week because we're trying to be really polished," he says.

Verbeek says LOVECoast is in the regional finals of CBC Searchlight's test for bands across Canada. The public is invited to listen to three of their songs vote for them at www.music.cbc.ca/#/artists/LOVECoast

"It would be great to get support from the Sea to Sky area in terms of listens and votes," Verbeek says.