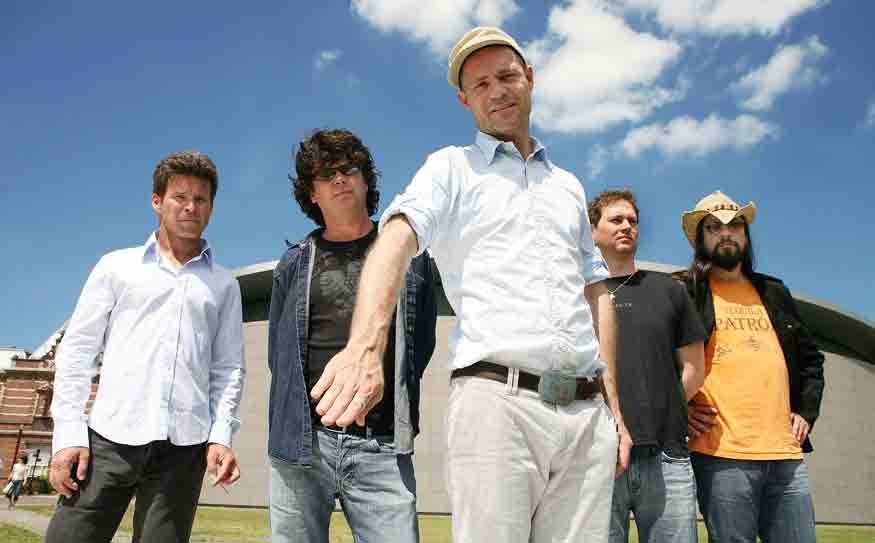 They say this about all the greats what can you write about the Beatles that hasn't already been written? Likewise for Led Zeppelin, or even U2, or Nirvana.

It would seem that once a band reaches a certain height, and has remained popular for long enough, there will have been a enough writers scrambling to say the same thing in a different way, over and over again.

And, alas, we face this problem with the Tragically Hip, Canada's most iconic rock band. What can be said, that has not been said already, about a band that has done more than most Canadians to define this nation's culture? Even that's been said many times over.

But to hear bassist Gord Sinclair tell it, all of this has been a happy accident. Few elements of their success, if any, have been calculated. Everything (or almost everything) that has happened has been the result of five good friends being honest with each other, and making honest decisions as musicians.

"It's the cool thing about being in a band where the most important aspect is how we're feeling about each other and the material that we're playing. Our prime responsibility is to each other as a group," Sinclair says, speaking by phone from his home in Kingston, Ont.

"Back in the mid-'90s it would have been really easy to go back and re-record 'New Orleans is Sinking,' again and again and again, but we didn't," he says.

If they had, he says they never would have lasted as long as they have. It's all been one "honest choice" after another that has ultimately driven their popularity. There was never any intention to create the soundtrack to a Canadian's life, or to provide the nation a poetic voice that music fans could get behind.

Sinclair says they simply have written about what they know and a lot of it has to do with Canada. Vocalist Gord Downie's lyrics — not to mention his delivery — have encapsulated for millions of people the diversified, even eccentric Canadian soul.

They had, in fact, been pressed by their former record label RCA early on in their career to generalize their perspective — "to write about chicks and cars," Sinclair says — to target the American audience. Sinclair says RCA insisted that they change the title of the Road Apples cut, "Cordelia," before it was released in 1989.

"He said 'Cordelia' was too egghead," Sinclair laughs. "If it was 'Carrie Lynn' it would be a different thing, but no one in States is going to buy 'Cordelia.' You hear of artists changing the lyrical content to suit the commercial aspect but that's just not our bag. We've never been good about being that thing, whatever that is."

It has come at something of a cost: while their popularity has soared in Canada, it never took off in the U.S. They have never had that one song that managed to "crack the American nut." Even an appearance on Saturday Night Live in 1992 — often a catalyst for mainstream success for emerging bands down south — did little to boost their appeal.

"It used to be a sticking point for us. When we were younger men, we'd go, 'Well jeez, if we can sell a million records in Canada and the United States is 10 times the size, why can't we sell 10 million records down there?' But it's not just simple math. It really, really isn't. It's a completely different industry, with different priorities."

They've come to accept this over time, and Sinclair says the band feels "fortunate" with the career they've had in the States. If nothing else, playing to smaller clubs in the U.S. has had a levelling effect on their egos after selling out arenas in Canada for two decades.

As a result, it seems the Hip has reached the perfect level of popularity: they have enough fans, and have sold enough records, where they can comfortably pursue their craft, but have flown enough under the radar where very little is expected of them (consider U2 or Radiohead). They've never reached dramatic international heights, and it has never gotten big enough to crush them (see contemporaries: R.E.M., Nirvana).

More importantly, they've remained consistent enough throughout the years, with enough integrity as artists, that they've cemented a loyal fan base and they're at the point, in 2012, when the Hip can really do no wrong.

Fortunately, for a band that has been bestowed this iconic status, they have never fallen into the egomaniacal trappings that could very well have consumed them.

"We've been fortunate. We've had a lot of accolades thrown at us in the span of our career. We are genuinely flattered by it but we don't really take it all that seriously," Sinclair says.

"I like to think that we're just in a long line of really good Canadian bands that have learned how to write, and how to play, and perform in front of people and convey the emotions that music is all about to people in a live setting."

Next year, the Hip will celebrate 30 years together, with the original lineup nearly intact: Downie, Sinclair, drummer Johnny Fay and guitarists Rob Baker and Paul Langolis, who replaced saxophonist Davis Manning in 1986. They're now putting the final touches on their 12th studio album, And Now For Plan A, due out in October. Sinclair says the album represents a band that is still comfortable playing together, after all these years. Recording, he says, was a "painless process."

"We sat down with (Gavin) fairly early in the process and what he really wanted to capture in the process was the band playing together," he says. "In a lot of ways, it was kind of like how we would have made records in the early '90s, when we were touring all the time, writing on the road, learning songs on the road and throwing them in the set."

The album's first single, "At Transformation" is the Hip at their heaviest, a brainy and brawny gem harking back to their Fully Completely glory days. Chances are it will do little to sway all the non-believers but the legion of dedicated Hip-head are heralding it as a return to form. Sinclair says the same can be said for the entire album.

"It's a Tragically Hip record. It's not the same thing over and over again," he says. "I mean, we're kind of old fashion guys in the sense that when we're making an album, we're still thinking in terms of a collection of material that we're hoping that people will listen to from song one to song 11."

"We write songs that will play off of each other and make for a great 35 minutes of listening. We might anachronistic in that sense but that's still what I'm looking for when I buy CDs. I mean, I might be anachronistic there because I still buy CDs," he laughs.

And there it is. The untold truth: The Tragically Hip are straddling the line between iconic and archaic. Not that it matters, necessarily — they still rock harder 95 per cent of the working bands out there.