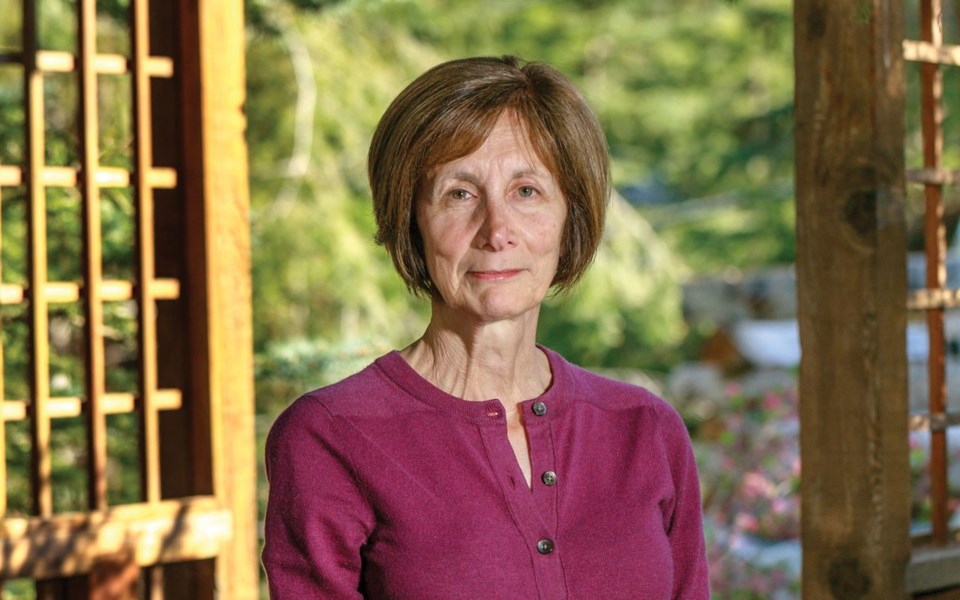 Whistler author Stella Harvey was in Greece having lunch with her relatives when she asked her Athens-based aunt if she had ever gone back to the town where her father and mother lived to find their land.

"She was telling me, 'I never went back looking for anything. I went once and there were some problems.' They were very aggressive in the town where her father—my grandfather—was born. She said, 'In the end, I just figured it must have been a vendetta,'" Harvey says.

That word—vendetta—stopped her in her tracks. For an author who mined parts of her family's history and culture for stories, the word was loaded with mystery—and rife with storytelling potential.

At the time, she was in the midst of working on her second novel, The Brink of Freedom. But the conversation ultimately led to Finding Callidora, her third and most personal book yet.

Pique caught up with Harvey ahead of a reading event called Our Big Fat Immigrant Families alongside poet Cornelia Hoogland—set to take place in Whistler on March 11 and in Squamish on March 9—to talk more about the book's inspiration and what's up next for the novelist and founder of the Whistler Writers Festival.

Your book officially launched at the Whistler Writers Festival, but it got a little overshadowed by the festival itself. It's nice to do something separate. What will the format of the upcoming events be like?

Stella harvey: We'll talk a little bit about the origin of our books separately. Then do a reading, and then break off into a Q&A. We may do a second reading ... but I think most people really like the discussion and I think from my own experience as a reader, as well as someone who reads from their work in a public place, as well as organizing the festival, I always say to people, 'Short readings are what are so impactful.'

This was your third book. You must have the process down pat by now. What's it like writing a third book?

SH: I think for me, I have to feel something. For me, it's asking a question, 'Why is this happening?' So with my second book, it was around a refugee crisis because I was surrounded by it and, why was that happening? Whereas with this book, it had to do with something my aunt said [regarding the vendetta].

I've always missed my culture my whole life. And I've often wondered, with my Greek relatives, have they ever had the same feelings to search for their background, their culture? And of course they all laugh at me and say, 'Our cultures is all around us.' Yeah, that's true, but mine is not.

So I just started thinking about that word [vendetta] and what could've happened because nobody really knows what happened ... With those parameters I started to put together what could've possibly happened.

You've always done lots of research, but what was it like blending your family history with the idea of headlines from real newspapers. How did you balance fact and fiction?

SH: It was harder in this first part of the book, which is mostly fictionalized because I don't know. So you're making it up. And because I'm really plot driven, it was easier, that bit. Also I didn't look at things like headlines until much later. The last section of the book, which was the 'me part'—although not naming me—that was a lot more difficult because what do you tell of a life and how does it relate? What's important of it that relates to the other parts of the book? That section was the hardest for me to deal with.

You've called this book the most autobiographical. Was that scary to do?

SH: You have to face yourself too, all the mistakes you made because that's what makes for interesting reading. I think the thing I was most worried about was my American cousins because they had ... not an easy upbringing, and I only found them by accident and that's related in the book. I have become very close to them as a result. I wanted them to be OK with that. I sent parts of it to them so they would know what I was talking about and they were onboard. They came to the Calgary reading. They live in Boston and New Jersey. I'm a pretty open person anyway, so there's nothing really that I was ashamed of.

You talked about the idea of belonging and that being the overarching theme of the book. It's such a relatable theme. Have people been picking up on that thread?

Does writing about your Greek culture help at all with the longing, just delving into it from Whistler?

SH: It did a little bit. I was asked that in a book club and my students ask the same question. It helps because everything I write I get right into. Your characters become real and alive and they stay with you, especially when you're writing consistently. It does feel as though you're still there.

What's up next for you after these local readings?

SH: The publisher is looking for me to do an Eastern Canada tour, so hopefully that will come to be. In terms of my writing, I'm going rogue! I'm trying something different. After having read Omar El Akkad's American War, who was here with us last year [at the festival], and I also just finished Margaret Atwood, The Testaments. Because I'm such a political animal, I really would like to do something futuristic, more speculative fiction. Maybe 10 or 20 years down the road.

Since I've started this project things that are not that far from what I've tried to create—viruses, closed borders, environmental issues, journalists being shut, there's so many things that it's just frightening. I've set it in 2056, but we're not that far away.

I want to do something different and set it in the other part of my history, which is the Middle East, and Canada, and see where it takes me. It's very early on and who knows where it's going to go, but I think I've delved into the Greek lifestyle [enough] with three books.

Catch Stella Harvey and Cornelia Hoogland at the Whistler Public Library on Wednesday, March 11 from 7 to 8:30 p.m.

Their books are for sale at Armchair Books.