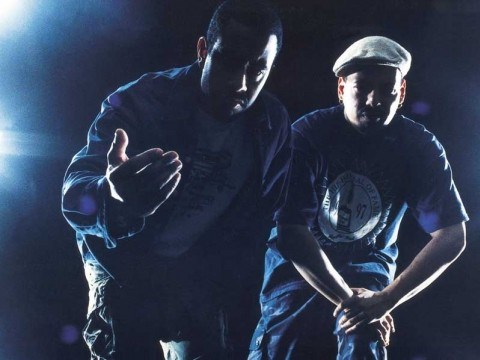 The Beatnuts - better known as Psycho Les and JuJu - have been making music together for almost 20 years, and they're still on the vinyl digger's never-ending quest for the next sick beat.

The team grew up just a few blocks away from one another in Queens, New York. They were introduced by a mutual friend, DJ Mo.

"We're from the same neighbourhood, basically - I'm from Corona, he's from Jackson Heights - and the only thing that divides that neighbourhood is this big avenue called Junction Boulevard," JuJu explained.

JuJu got his introduction to the world of hip hop in junior high, after hearing some Harlem underground records. The old school record collections JuJu was hearing featured an incredible range of genres and artists.

"It was like, 'what is all this stuff?'" But the one thing that they all had in common was that they'd all have those two-minute, 60-second breaks; that's what we responded to."

Curiosity officially piqued, a young JuJu began experimenting on his own, buying records and digging for records, searching for "common ground" and, of course, catchy breaks.

At that time, hip hop was still very much an underground culture. To catch the freshest tracks you'd have to stay up really late at night, tuned into public or college radio stations.

"...It was before they called it hip hop, you know what I mean?" JuJu laughed. "Before it became rap."

"To have been there, when it came from nothing to being an economic force now..." he trailed off. "It's influenced all kinds of music all around the world."

After this Canadian tour, The Beatnuts are heading over to Japan for another tour, a reach which the artist never imagined would be possible for the genre of hip hop.

"We always do Tokyo and stuff like that, but now we're going to all these places on the outskirts," he added.

The Beatnuts' upbringing and surroundings have infused and inspired their distinct sound, which combines elements of hardcore hip hop while still using heavy drums and loops and sampling jazz, funk and Latin-influenced music. Also, with two sisters 16 years older than him around in the '70s, JuJu was exposed to everything from Fleetwood Mac to Linda Ronstadt.

"That's everything because we're both Latino, so I already had my mother bangin' Spanish music from the time I was a kid," JuJu explained. "So I already had the music in me, as far as that was concerned; I grew up around it."

While they're all about experimenting with musicality and beat, they've had to maintain a bit of an edge on the lyrical front.

"Our neighbourhood was kind of tough. There was a lot of gangs and it was very macho, so that was kind of the thing, too," JuJu recalled.

"...You don't want to lose the respect of the people in your neighbourhood, your peers. We mixed it up; it wasn't completely hardcore. It wasn't like Necro or anything like that. We let you know that we're all about having fun and we can joke on ourselves. But at the same time we get a kick out of bashing a few heads in every once in a while, so don't get crazy!" he laughed.

"I think that that balance is what people really liked, and what gave the sound that we had a chance, because real guys could listen to our jazzy sounds and not be considered pussies," he added.

The two weren't originally known as the Beatnuts, but rather, the Beatkings. The name change came after hip hop pioneers The Jungle Brothers met the pair and pointed out that they were more like two nuts, with their comical, laidback approach to music.

"They always referred to me and Les as the Cheech and Chong of hip hop," JuJu laughed.

Over the years, The Beatnuts have released seven studio albums, with the most recent being Milk Me in 2004.

One of the tracks on Milk Me, Confused Rappers, actually takes a jab at Jennifer Lopez's production team for stealing their beat from Watch Out Now to use on her smash hit, Jenny From the Block.

"I didn't know what to think, I was like, 'holy shit!'" JuJu recalled. "I was more bothered to hear The Lox on it. I was like, 'damn, okay, you like the beat, but didn't it occur to you that we're Spanish, too? Maybe people would have loved you more for doing it with us!'"

The controversy divided the industry for a short while and ultimately ended up in lawyers' offices.

Despite the ups and downs they've experienced over the years, The Beatnuts are still at it. Now, after almost six years of hard work behind the scenes, these avid vinyl collectors have another one on the way: Planet of the Crates.

"We're kind of experimenting with a lot of different sounds and stuff like that, but still keeping that edge."

They should be dropping a few singles in the summer, giving fans a taste before releasing the entire album.

"When you believe in your music, that shit comes across. And it makes it easier for you to perform it, you enjoy it more, you're up there with the confidence that you know, 'man, I'm doing this because I love this shit and you can see that in my face.'"

Maybe the key to their longevity in a fickle industry has been diversification. They put on one hell of a live show, have mastered the production side of things, and are very well known for their remixing abilities, as well.