Taka Sudo’s work is on display for ArtWalk throughout the summer
Jul 22, 2011 8:16 AM By: Stephen Smysnuik 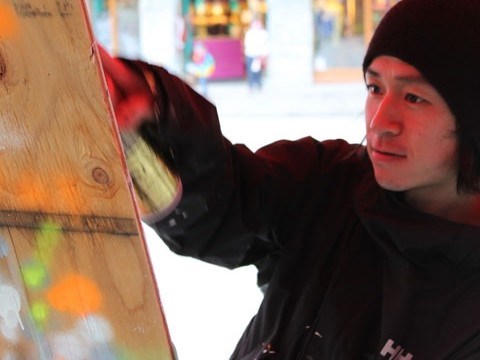 Taka Sudo is painting some shoes. They're for charity or something. He doesn't actually know what they're for but he's painting them anyway, outside Showcase in Whistler Village for the second ArtWalk reception.

People gather around him in small clumps. Many of them call him by name. There are other live painters in the village this evening but Sudo has the most visitors by far and he's the only one using Van sneakers as a canvas. The shoes are taped to plywood and he sprays them down with the same fluorescent colours that characterize much of his work.

Born outside Tokyo and currently residing in Whistler, Sudo takes his influence from both cultures, melding the hyper-urban aesthetic of Tokyo with B.C.'s wild natural landscapes to create the most inventive fauna depictions seen outside of Adult Swim cartoons.

Over the last five years, Sudo has been one of a handful of visual artists from the Sea to Sky to garner international attention. Since 2005, his work has been showcased in galleries in Tokyo and across the U.S. and Canada.  He had his first solo exhibition in Los Angeles this past January and in the last two months his work has been displayed in Whistler, Vancouver, San Diego and Hood River, Oregon. He's done designs for Mat the Alien and hip-hop collective Animal Nation. His work adorns skateboards and snowboards and now he designs T-shirts for clothing companies back in Japan.

He's a blithe artist who seems to take each new assignment with a smile and a shrug of the shoulder. He laughs a lot, which is good, and explains to some extent the vibrant colours in his paintings. His clothes are flecked with fluorescent paint.

"I always use a fluorescent colour with a neutral colour like grey or beige," he says.

The contrast of these colours is used to articulate the strange beauty that is born when urbanity and nature come together.

"I put chaos or lots of different feelings in our living environment. Everybody has his or her own neutral point, I think," he says.

He visited Whistler for the first time as a 23-year-old for the 2001-2002 winter season and stayed for the usual stuff people stay here for, but he was deeply inspired by the "creative energy" held between the mountains. It captivated him. It was more alluring than whatever energy was held back in Tokyo.

He says it's difficult to explain why that is. It could be his limited grasp of the English language - his accent is understandably strong - or it could just be the difficulty anyone would have articulating something so intangible.

One reason is the limited space available for artists to create in Tokyo. It's expensive and competition is fierce. He pulls nervously at the zipper of his jacket, pulled all the way up to shield from the unseasonable cold. He says: "Creativity is to make something positive from really pessimistic situations."

He didn't always intend to be an artist though. Back in Tokyo, he earned a law degree before realizing that the law profession in Japan was more about upholding the system than it was about maintaining justice. He was too young then to know what he wanted to do with his life but he had an interest in the arts. He took some filmmaking courses during university and had his first taste of the contributing accompanying artwork for these school projects.

He discovered that an artist could tell entire stories with one picture. Filmmakers take two hours of film.

But that's not why he does it. Not exactly. I ask him what he likes most about being a visual artist. He stares off at nothing in particular, pulling at a clump of his hair. He laughs.

"I never think about it," he says.