Devin White’s work on display at Millennium Place for ArtWalk
Jul 8, 2011 7:48 AM By: Stephen Smysnuik 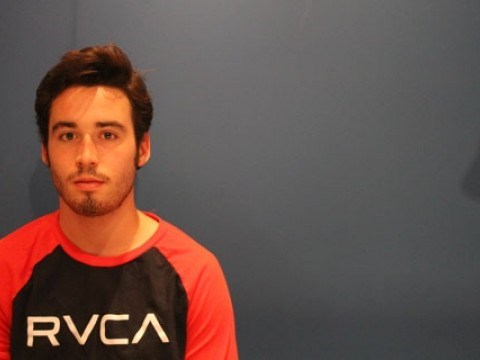 "Oh, there's my long underwear," says Devin White as he digs through a stash of canvases sandwiched between the couch and the wall in his bedroom.

His bedroom is a graveyard of unfinished paintings and discarded ideas. He digs through them now, unsure of why he's saved them in the first place. The teen years are often defined by restlessness and White's are no exception. If a painting doesn't work, he moves on to something else.

White's latest (and admittedly best) work is on display at Millennium Place for ArtWalk's group art show, alongside works by Dave Petko and Vanessa Stark. A purple portrait of E.T. Three images of a woman's head in consecutive stages being sliced to pieces. The recent Whistler Secondary grad exemplifies the possibility of a new weird Whistler, which ignores portraits of snow-capped mountains for lowbrow and absurdist graphics.

But White isn't trying to create some kind of movement or make any grand statement. He's just drawing pictures.

"People are always asking, 'What does this mean?' Well, I don't know. I just drew it. There's nothing behind it. I have to write bios about what inspires me but I just do it." He shrugs. "I just think it looks nice."

He's a soft-spoken and introverted 18-year-old sporting a fading black Curious George T-shirt and flecks of green paint on his thumbs. He's been featured in Whistler exhibitions since he was 13 and says he's tired of the snowboarder mentality that dominates this town and the lack of creativity that comes with it. It's no great surprise he's eager to get the hell out of Whistler for a while.

"He's not afraid of putting himself out there, whereas other people want to be accepted and for people to like their work," says his mother, Deanna.

There has been a revival of sorts in the last five years of sorts in Whistler toward modern, anti-establishment artwork. The Blind Mute parties showcase what the village art galleries generally refuse to carry and White's been featured at, and sold pieces in, these art shows. But he's critical of the parties because they were just that - more about the party than about the art itself. Even at 18 and having grown up in the cozy shroud of quiet mountain life, he seems to grasp the reality of art-world living - that the event around the art is more important than the art itself.

"I've put so much work into creating all this art and it would end up piling up in my bedroom. People don't go there to buy art, they go there to party."

White will move to Vancouver in September to study graphic design at the Art Institute. He wants his hard work plastered on mediums with some practical use or somewhere it can travel, rather than hanging in a gallery. He wants to design T-shirts, posters and magazine covers. Ad logos. Art that can be marketed and enjoyed by the masses.

White admits that he was an average student in high school, even at the best of times. Art class was particularly frustrating - the confines of the school curriculum were at odds with the art that was pouring out of him. He lacks the technical abilities of life drawing or sculpting. Instead, he'll experiment with images, modifying them with bleach or stain remover, cutting and pasting at will and painting over or embedding into the milieu. For this, White says he was frequently at odds with the school art teacher.

"We didn't have much room for creativity," he says. "She wouldn't be pleased with my art because it wasn't what she had asked."

He'd be producing art constantly but he says it didn't fit with what the school was looking for. He ended up with 70 per cent at graduation.

"But at one point I was at, like, 40 (per cent)," he says, the wry smile indicating he takes this more as a badge of honour than a failing.

And why not? He beat out his peers for the $500 student art award, which is given to one senior art student in each secondary school in Whistler, Pemberton and Mt. Currie. He beat out classmates who had better grades and fit the academic mold. The WAC certificate for the award is prominently displayed on the refrigerator, which once may have exhibited his childhood work.

His mother often wonders where the inspiration for his art comes from. She recalls one instance where he was describing his plans for a live-painting exhibition. Deanna said, "Well that's a weird idea.

"And then he says, 'When it gets weird, it gets interesting.'"