The 411 on the summer outdoor film scene 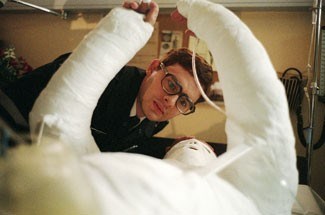 This year the idyllic lakeside lawn at Lost Lake Park is host to summer screenings by both Whistler Community Services’ LUNA program and the Whistler Film Festival’s Reel Alternatives initiative.

Sure both series take place under the stars at dusk and require attendees to bring their own seating. There are, however, some key differences between the two.

Here then, is everything you wanted to know about summer outdoor movies in Whistler:

Lunafliks are all about camaraderie. The main goal is to get people out of the bars and under the stars for a good time they’ll remember. The films aren’t current – ’80s sci-fi classic Tron is on the roster for early August – but they’re fun, akin to having a bunch of friends over to watch a kitschy video.

Those outside the target 18-29 year old age bracket are welcome, however the fare has been tailored to this group. Last Lunaflik Four Rooms more than earns its R-rating with scenes that were definitely not suitable for children.

Previous Lunafliks include the screwball French farce Taxi (shown as a drive-in movie at Base II on Blackcomb Mountain), B.C.-set feature film The Bear , and the edgy director ensemble Four Rooms .

Upcoming Lunafliks include quirky Australian comedy The Rage in Placid Lake , about an outsider teen that chooses to live as conservatively as possible in order to rebel against his freethinking hippie parents. The film screens this Thursday, July 29 .

is scheduled for Aug. 5.

Look for Lunafliks every second Thursday at Lost Lake Park beginning at dusk (usually between 10 and 10:30 p.m.)

DJs spin before the films starting at 9:30 p.m. Todd and Phroh threw down funky reggae tracks before Four Rooms .

All this for the fantastic price of...

$2 if you’re a LUNA membership cardholder, $4 for non-members. Membership cards are free to those 18-29 years old and can be obtained at any LUNA event.

Allowed but limited. A better bet is WAVE’s shuttle running before and after the movie from the Gondola Transit Exchange for $0.50 each way.

Go to www.lunawhistler.com or call 604-902-0769. Screenings are cancelled in event of bad weather.

The Whistler Film Festival Society began Reel Alternatives in April to bring film festival and alternative cinematic fare to Whistler on a regular basis. The first three films in the series screened at Village 8 Cinemas.

The popularity of LUNA’s summer films inspired festival organizers to take Reel Alternatives outside for the summer. They have done so in style, with a high-quality 15 x 20-foot inflatable screen to enhance the viewing experience.

The real deal on Reel Alternatives...

The Whistler Film Festival aims to provide quality independent and Canadian programming as an arts and cultural experience for the community as a whole. This is the primary reason the festival decided to go with its own summer film series as opposed to joining hands with LUNA, which is specifically targeting an 18-29 year old demographic as a community service.

Reel Alternatives’ outdoor films screen every second Wednesday through the end of August.

The first outdoor Reel Alternatives film was acclaimed Canadian film The Snow Walker, which was intended to coincide with the first Whistler Arts & Music Festival on July 10 but was rescheduled for Wednesday, July 14 due to weather.

Delicate Art of Parking director Trent Carlson will be in attendance this Wednesday. Rutherford member Rob Funk will play a pre-film solo set.

All this for the fantastic price of...

The Delicate Art of Parking for Reel Alternatives...

Allowed but limited. A better bet is WAVE’s shuttle running before and after the movie from the Gondola Transit Exchange for $0.50 each way, as it does for Lunafliks.

Go to www.whistlerfilmfestival.com or call 604-935-8035. Screenings may be cancelled due to weather.