Sixth annual Canadian BBQ Championships get smokin’ with both professional and amateur competitions
Aug 3, 2007 8:45 AM By: Nicole Fitzgerald 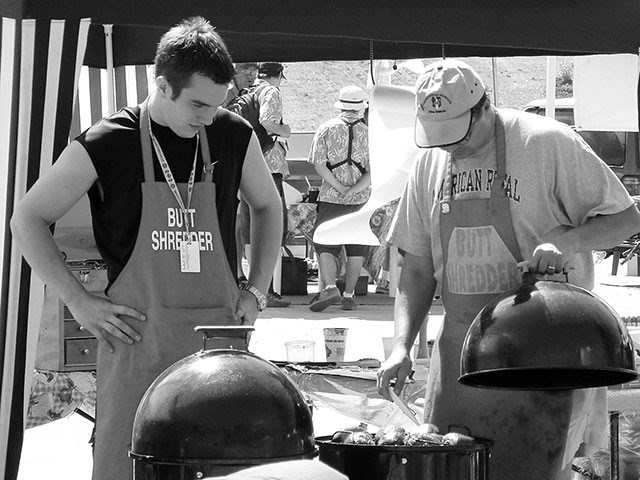 but Shredders Ready Competitors check out what is under the smoking lid at last year's Canadian National BBQ Championships at Dusty's at Creekside. Photo by Nicole Fitzgerald.

Last year, Bob Hasselbach missed the title of Grand Champion at the Canadian National BBQ Championships by one point. This year the Dusty’s chef manager has been determined to improve his charcoal and wood burning ways, with eight smoking competitions under his flipper. already

All hopes rest on competition number nine, the 2007 Canadian National BBQ Championships, which get cooking on his home stomping ground from Friday, Aug. 3 to Sunday, Aug. 5 at Dusty’s at Creekside. The barbecue champ not only wins bragging rights, but also a free trip for two to Jamaica, $1,500 cash and an invitation to compete in the BBQ World Championships in Lynchburg, Tennessee.

“I cooked twice against Walt (the current grand champion) this year and both times he made a point of telling me how great his trip to Jamaica was,” Hasselbach said. “I really wanted to practice as much as I could this year to give myself the best chance… Expectations are really high for me to do well. Everyone knows I’ve been competing a lot and expect me to win on my home turf. But this competition has the biggest prize money: it draws big teams. Competitions like this are the hardest to win and the Whistler teams are gunning to kick my butt.”

Pork butt that is.

For the Sunday competition, more than 50 smokers will light up in four categories: beef brisket, pork shoulder, pork ribs and chicken. The competition starts at 11 a.m. and awards are announced at 3:30 p.m. The team winning the overall highest mark moves on to the World Championships.

Hasselbach of the Eh Team won the grand champion title at two Ontario smoke outs, but he is most proud of his second placing in brisket at the New York State Barbecue Championships, which camped out on an Olympic speed skating oval.

“I was the only Canadian,” he said. “I’m most proud of it because of the calibre of teams I was competing against.”

Anyone who has seen these barbecue crazed competitors, who check on their $10,000 smokers every 15 to 30 minutes over 13 hours to ensure the temperature and smoke are just right, knows how seriously these people take their barbecuing.

Rumour has it plans to sabotage high rollers such as Hasselbach are in place. Forget about food switcharoos or tinkered cookers, these butt shredders mean serious business — something about sending in the big guns, Jack Daniels.

“There are some words going around these days that there are some plans to get people drunk the night before, expect a little bit of skullduggery here and there,” Hasselbach warned.

And all this time I thought the only way to light a barbecue was to have a match in one hand and a cold beer in the other.

So competitors, you’ve been warned. If you ask for a beer to wash down the Whole Hog Feed Saturday night, Aug. 5 at Dusty’s, and bartenders say all they’ve got left is moonshine — well your goose is as good as cooked.

Fortunately that goose can be entered in the King of the Grill Anything Goes Contest on the Saturday, where amateurs and professionals alike can compete side by side in King of the Grill, Chili Contest, Backyard Burger Championship and Cocktail Contest as part of Local’s BBQ Day. More than $2,000 in cash and prizes will be given away.

The King of the Grill is an anything goes competition; ideal for competitors seeking out their inner barbecue brilliance for the first time. Only two restrictions apply: the main portion of the meal must be grilled or smoked on an outdoor grill or BBQ, and it must be cooked on site. Vegetables, fish, lamb and steak will all be offered up in competition for the $500 cash prize and Weber barbecue donated by Kerrisdale Lumber.

The Backyard Burger Championship and Cocktail Contest provides both instruments and ingredients. Barbecue competitors only need to bring “secret” ingredients if they so desire. The burger competition requires Bull’s Eye BBQ sauce be used and cocktails must include Grand Marnier. The burger baron wins $500 cash, a Weber barbecue and the winning burger is featured on the Dusty’s menu. The cocktail winner walks away with $250 cash.

If flipping burgers and spending all weekend in front of a smoker doesn’t appeal, learn the tricks of the trade at the Whole Hog Demonstration Friday, Aug. 4 at 7 p.m. and leave cooking to the pros. Onlookers will also get the first shot at tickets for the hog feast on Saturday night at Dusty’s. Big John Bates and the Voodoo Dollz keep the feast festivities smokin’ with their psychobilly rock and burlesque show.

Non-smokers can also sit on the other side of the table as a championship judge. Exercise your taste buds and love of barbecue by signing up for judging school by contacting Joshua Kearns at 604-905-2146 or jkearns@intrawest.com .

For additional information and registration forms, visit whistlerblackcomb.com and click on events.