The Brains go to Hell 'N Back

Who: The Brains & Carpenter When: Sunday, May 31 Where: Garfinkel's Cost: $10 in advance at Billabong, Katmandu & The Hub Garnering praise like, "This band is going to kick down your door, eat your brains and start a pit in your living room -
May 29, 2009 6:30 AM By: Holly Fraughton 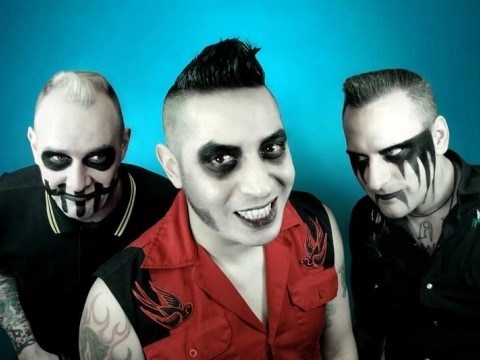 Who: The Brains & Carpenter

Cost: $10 in advance at Billabong, Katmandu & The Hub

Garnering praise like, "This band is going to kick down your door, eat your brains and start a pit in your living room - and you'll like it," from the punk music source, Interpunk, you can bet that The Brains have what it takes to rock a room, even in a party-hardy town like Whistler.

It's really no mystery, with guys like Frank O'Brains on drums, Johnny Montreal manning the bass, and the undead Rene De la Muerte leading the bunch, that every show is jam-packed with good, clean psychobilly fun and costumed craziness.

"Its 110 per cent pure energy," O'Brains said. "We put everything we have into our live sets. We do our best to entertain and we're really into what we do, so it shows we're on stage. We move around, talk to the audience, make them sing along - just really make a big party and everyone's invited!"

On Monday morning, the three-piece group was on the road making its way from Lethbridge, Alberta, accompanied by their roadie, Chris, to Kelowna for yet another stop along their western tour.

The Brains have played Whistler before - two times, actually - and say that playing to a young, open-minded crowd is a positive experience.

"The last time we played there it was great - it was packed and people liked us a lot," O'Brains recalled.

But before The Brains came to be, Montreal and O'Brains actually played in another band, The Ripchords, back in the early '90s. The two became good friends through their musical pursuits, and about 20 years later, finally decided to try their hand at a different genre, a far different genre: psychobilly.

De la Muerte points out that alcohol played a key role in uniting the three to become The Brains 10 years ago in their hometown of Montreal.

"We used to get drunk at this bar..." he recalled. "We became friends and started playing music together."

Essentially, the three were drawn to the world of psychobilly, which is riddled with overtones of horror and punk, because it seemed to be fun. And that's really the name of the game for this band: fun.

"It's easy: we want to go, play, have fun and hopefully people who come to the shows have fun, too," O'Brains said.

Over the years, the group has had the chance to collaborate with and perform alongside a number of other well-known psychobilly groups, like The Creepshow. And though they definitely look the part, O'Brains points out that their sound is distinctly pure punk rock.

"We're closer to punk bands than psychobilly, really," he said. "So when we write songs, it's very raw and pure."

While not exactly a mainstream genre for most - as Montreal puts it, "it's a subculture of a subculture" - psychobilly has gained a pretty solid following over the years. The genre seems to be getting stronger and stronger as psychobilly groups are able to reach out to new audiences using powerful tools over the web, and The Brains hope to keep recruiting more zombies through their recorded work and their infectious live performances.

Metal, rock, punk and psychobilly fans come out in droves to see what The Brains have in store.

"It's all about fun, and it includes all the things we like in life. We like cheesy horror movies, '50s rock and roll bands, the energy of the punk rock," De la Muerte explained. "So we just mixed it together, and it's psychobilly, actually."

De Le Muerte actually discovered the genre at the tender age of 15, while he was playing more of a rockabilly style. Then he was introduced to the distinct sound of none other than Reverend Horton Heat (a.k.a. Jim Heath.)

"Their sound was like very rockabilly with a little more distortion," De Le Muerte explained. "It kinda sounded cool so I started trying it, too."

Combining elements of '50s rock, country, and old school punk was an appealing proposition for all three members. Basically, they were able to create the perfect musical storm. Plus, they got to be zombies.

"That's awesome, because we can never die," De la Muerte said with a  laugh. "We are real zombies in real life, too."

These guys truly get into character for each and every show, decked out in full human flesh-eater attire, with some serious makeup. A gimmick to some, but for them, its become a necessary element.

They started the band during the spring months, and just happened to be ready for their first live performance on Halloween. So, they decided to dress up like zombies, adding another visual element to their performance to keep the audience fully engaged. And the personas just stuck.

"We haven't stopped from that day - it's the same day forever, now. It's always Halloween," De la Muerte said. "Actually, we played one show without the makeup and we sucked."