The Courageous Mountain Rangers cap off busiest season yet 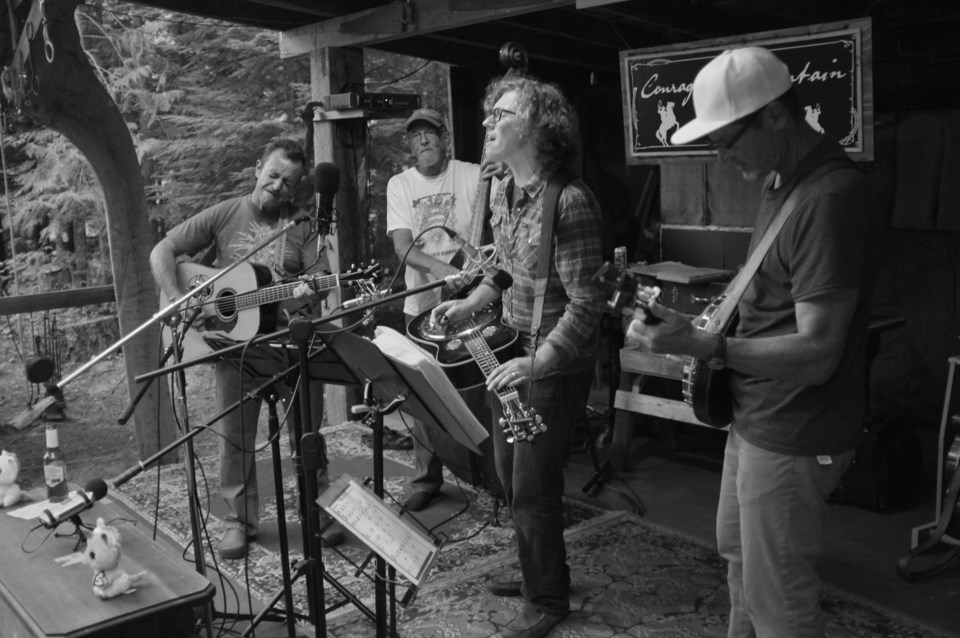 Brett Florio has a rule for jamming.

You better show up with one of two things—musical chops or bearing gifts. That’s how, two years ago, he found himself with a 1.5-litre jug of rye slung over his shoulder, standing on a porch in Poole Creek, just outside of Pemberton, in front of the three long-time members of the bluegrass band The Courageous Mountain Rangers.

“You have the water in the background, the wrap-around porch and these guys ripped into a song, played it flawlessly—three-part harmonies perfectly—and I was sitting there,” Florio recalls. “They finished and started laughing and go, ‘Oh we haven’t played that in probably nine years, eh?’”

That’s when he turned up with the hooch (somewhat ironically, considering guitarist and banjo player Jeff Heintzman calls him “the most moderate, temperate person I’ve ever met—besides my mother”).

The band had been playing their brand of bluegrass in Pemberton and Whistler for nearly two decades by the time Florio and his family decided to halt their round-the-continent RV lifestyle and settle in the corridor. In each spot the family stopped, Florio would seek out a bluegrass band to jam with—making no exception in the resort.

“Bluegrass is sort of unique,” he says. “There aren’t that many genres where you can hook up with people and just play.”

This area was even more unique in that there was really only one band playing that style of music—and, it turned out, they weren’t entirely sold on adding a new member at first.

“After that first jam I talked to Mike [Grenzer, mandolin/ guitar] and I said, ‘I don’t know about this guy. We’ve got all this material—like 3,000 songs—and he’s going to have to learn it all,” Heintzman says.

He’s exaggerating, but the band knows an astounding 500 tracks, which run the gamut from The Beatles to Hank Williams, to the bluegrass standards to their own original tracks, which they all write.

But Florio had a trick up his sleeve. While he had been playing guitar since the age of five, about a year earlier he decided to learn dobro—which is an acoustic guitar that has a metal resonator built into it to serve as an amplifier. It's also “the hardest instrument I’ve ever learned," he adds.

“No one needs a guitarist,” he explains. “The nice thing about dobro is no one knows how to play, so no one knows if I’m good or bad at it.”

Heintzman is a little more effusive. “He’s totally a music guy,” he says, adding after three jams or so the band knew they’d keep him. “He’s continually blowing our mind with the stuff he’d pull off on the dobro.”

The last two summers as a quartet have been some of the busiest ever for the band. None of them have aspirations of making a full-time go of things; they’d rather pick and choose the gigs they find fun.

The uptick in work is partially due to Florio adding the band to all social media platforms—as well as recording every show—and partially because Grenzer reached out to new venues.

“Mike took the bull by the horns and we went and talked to people and got us some incredibly low-paying gigs,” Heintzman deadpans.

(Both warn that, along with help from Larry Cosulich on bass, audiences can expect a lot of “bad” jokes at their gigs. Watch a few clips and you’ll see that the dry humour runs nearly non-stop. One beer too many and you might just miss it.)

There were several afternoons at the Pemberton Farmers’ Market, a memorable show at the Slow Food Cycle, and, recently, a gig at the Hear and Now Festival.

Next up—perhaps the last gig of the year before Heintzman makes his annual winter migration to Mexico—is a show at The Point Artist-Run Centre to headline the All Roots & Original Orphans’ Thanksgiving on Friday, Oct. 11. Vancouver singer-songwriter Saphira Elektra and a Thanksgiving feast will serve as the openers.

On top of that, “you’re going to hear four lead singers, a lot of harmony and some stupid-ass jokes.”

Tickets for the show are $33 with dinner or $15 for the show only. Children 12 and under are $20/$10 and kids under three are free. Get them at Armchair Books or thepointartists.com.