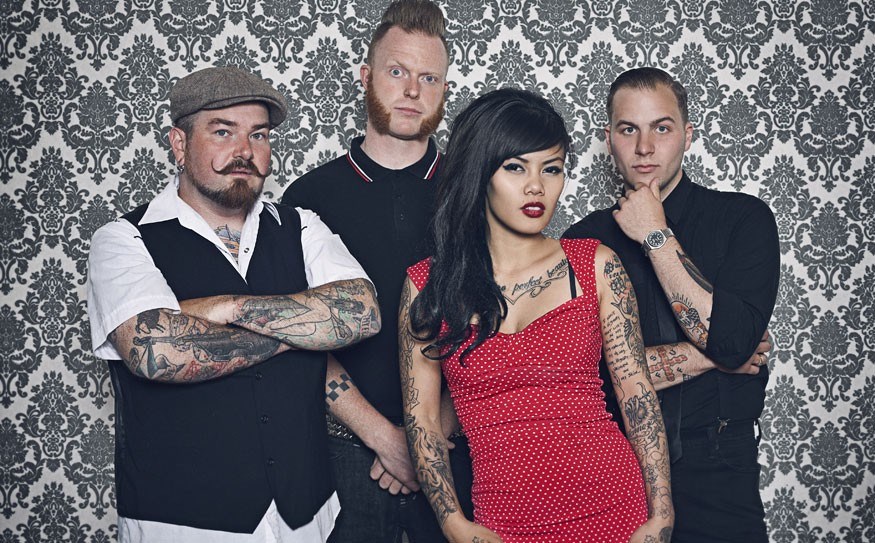 Horror Buffs The Creepshow are set to play Whistler on Sunday with their new singer and drummer in tow. Photo submitted

Kenda Legaspi might not be able to explain the horror movie inspiration behind The Creepshow's raucous psychobilly punk tracks, but she's happy to suddenly find herself performing the Toronto act's songs.

The new vocalist/guitarist for the group replaced longtime singer and shredder Sarah "Sin" Blackwood, who left earlier this year to work on a solo project. "I was a huge fan of them," Kenda (who prefers to go by her first name only) says. "A friend, Ben Rispin, from the band St. Alvia messaged me and asked if I wanted to join (on the St. Alivia/The Creepshow summer tour) because Sarah was busy. Of course I said yes. I tried out for them and things worked out really well. We all became friends really fast."

While she's over the moon about her addition to the new line-up (which also includes drummer newbie, Sandro Sanchioni) Kenda is also anxious to contribute to new songs. The band is currently on a cross-Canada tour, with a stop in Whistler at Garfinkels on Oct. 28, but they've managed to continue writing on the road with hopes of releasing their fourth album next year.

"We get a lot of ideas and lyrics on the road," Kenda said. "We're looking to do a lot more, like, fun, punk-er songs. More rockabilly songs too."

When asked about the campy horror flicks and b-movies that have famously played a role in shaping the band's lyrics, Kenda defers to "Ginty," a.k.a. the Reverend McGinty, keyboardist and one of the band's original members (along with Sean "Sickboy" McNab on the upright bass).

In keeping with the season, Ginty enthusiastically offered up suggestions for five of their favourite and most lyrically influential scary movies:

The Last Man on Earth

Vincent Price becomes a vampire hunter after humanity is ravaged by a disease that turns everyone into the living dead. "Very early on when we were writing (2008 sophomore album) Run for Your Life we talked about doing a concept album and calling it The Last Band on Earth," Ginty explains. "It was a tip of the hat to The Last Man on Earth. We were supposed to be the last band on earth because there'd been a zombie apocalypse or a nuclear apocalypse. We scratched it early on, but the song 'Rue Morgue Radio' still had that vibe to it."

The 1985 sci-fi horror follows a medical student and his girlfriend as they begin experimenting with re-animating dead tissue. "It's wonderful," Ginty says. "It doesn't take itself too seriously. It's got a lot of the old Frankenstein mythos in it. It also has naked zombies running around too. It hasn't played a part in lyrics except that it's fun and easygoing and that's sort of been our motto. We only started this band to have fun and fool around, so I think that movie especially embodies that spirit."

The slasher franchise stars the endlessly horrifying Jason Voorhees, who died as a child at Camp Crystal Lake. "Every time we'd drive through northern Ontario we'd pass Camp Crystal Lake, which is the same as the camp where all the action takes place in Friday the 13th, one through eight," says Ginty. "Why would you name a camp after the camp in Friday the 13th? That always creeps us out. And also Friday the 13th part one stars Kevin Bacon. Part four stars Crispin Glover. You have to respect that."

In this 2002 flick a spirit exacts revenge on anyone who enters the house where it lives. "It's a really big departure from a horror movie," Ginty says. "It's just like a super creepy lady and her super-duper creepy kid chasing people and scaring them to death. I just re-watched it with my roommate and her friend, and her friend wanted us to walk her to her car after."

Creatures from the Black Lagoon/Dracula

Campy, spooky and full of failed love, this pair of films was also influential. "Our song 'Creature of the Night' is sort of a reference to a lot of the doomed love of some of those old b-movie horrors. There's references to the heartbreak of not being able to express true love because of your state of monsterness," Ginty says. "I think that's relatively heartbreaking."