The fine art of the après 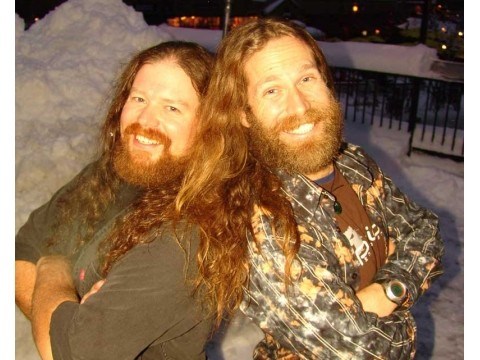 After a day on the mountain - whether you've been waist-deep in powder all day or spent most of the morning catching edges on icy patches - nothing beats a cold beer with friends and family on a patio, the sun just starting to set in the distance.

Of course, this après ski tradition isn't complete without enjoying a well-deserved snack and some serious entertainment while still wearing ski boots, sweat on your brow and a smile on your face.

In Whistler, the undisputed kings of the après session are Guitar Doug (Doug Craig) and Grateful Greg (Greg Reamsbottom), otherwise known as The Hairfarmers. This beloved bearded duo has been rockin' local patios for 10 years, providing a soundtrack for the Whistler après ski experience with a mic, hand drums and guitar.

They've been voted Best Band in the Best of Whistler Awards for six years running, and during an average year, they play about 250 shows. While that's pretty impressive on its own, The Hairfarmers are stepping up their game in a big way for the Olympics, playing more than 40 shows in the month of February, the majority of which will go down at the après hour at Merlin's in the Upper Village.

But what is it about this bogarted European tradition that seems to resonate with the people of Whistler?

"It's the momentum you created up on the hill playing in the mountains all day, you try and prolong that for as long as possible and if you can come down and have that much fun in the club with your friends that you've been up on the mountain with - it's a different kind of fun, but it can be just as much fun - then why not?" Reamsbottom said. "Keep the ball rolling!"

The Hairfarmers are, in many cases, the men responsible for keeping that après ski adrenaline pumping.

Both long-time Whistler residents - Reamsbottom for about 10 years, Craig for twice that time - the European tradition hadn't really taken off in Whistler when they first arrived. People would just congregate at the bottom of the hill and drink beer in parking lots, or go to Dusty's to grab a bite to eat and head home.

"There was no party," Craig recalled.

All that changed when The Hairfarmers came onto the scene.

Last Friday, Merlin's was packed with skiers and snowboarders decked out in sweaty, semi-sticky glory - the audience a veritable sea of ski boots and toques, rocking out and singing along to classic hits like Roxanne.

"We never plan anything ahead - we never have, and we probably never will," Reamsbottom said. "It's all about if you're doing what you're supposed to be doing, the good things will be happening, and if you're doing it right, it'll happen even faster! Just let the universe unfold as it sees fit."

They apply this same carefree attitude to every performance.

"It's unconstitutional; it's not right in the nation of Hair," Craig said of organizing a set list.

"Plus, it would be more work," Reamsbottom said with a laugh.

See, in a Hairfarmers show, making a request isn't considered to be poor audience etiquette; in fact, they rely on requests and input from the audience, who ultimately steer the ship. They've had requests whispered in their ears, scribbled onto napkins and passed along by waiters, and even text messaged to their cell phones.

"You get the show that you ask for when you come to see us," Reamsbottom said. "...You're responsible for your show; it's a big responsibility!"

It doesn't seem to matter if these musicians are playing to a crowd of 20, or 200.

"We don't have to have a great big roaring sea of fans to create that much energy," Craig added. "You take a bunch of skiers that are just coming off the hill and really challenged themselves with their friends and families and (they) have a sense of irreverence and no real sense of responsibilities left. So we have all that extra energy all of a sudden; you might as well throw a party!"

According to Craig, one of the keys to hosting a successful après ski party is location. And Whistler patios are prime for the experience.

"Here, we have patios that actually have enough sun to keep an audience warm while they listen to the music," Craig said.

Anyone who has wandered around Whistler Village has probably noticed that there are quite a few patios to pick from. But not all host regular live entertainment. Look for serious après action at Merlin's, Longhorn Saloon and Garibaldi Lift Company (GLC).

Robbie Currie (a.k.a. MC Nobody Really) has been a fixture on Whistler's music scene for years, hosting many a hip hop show and, of course, après sets on local patios. But during the Olympics, he'll be a familiar face at many of the Hairfarmers' shows, interacting with the audience and musicians between sets as MC for 17 days of back-to-back shows.

"Après is all about beer and music," Currie said. "Quite simply, beer and music, and reflecting on a wicked day on the mountain. It's all about skiing your ass off all day and coming down and enjoying good beer and good music."

No stranger to keeping a crowd entertained, the après crowd doesn't pose much of a challenge to this seasoned emcee.

"It's not a hard gig. I'm there to keep the crowd hyped and do what I do best: just be good on the microphone."

And anything goes when it comes to attire; going home for a shower and fresh clothes is actually frowned upon in this snoweater culture.

"I've seen people in their ski boots naked, so..." Currie trailed off with a shrug and a smile.

Of course, things can get a bit hairy at an après session.

"Back in the day, about 10 years ago, the après (sessions) were insane!" Currie recalled.

"I've seen someone skull a pitcher of beer out of a dirty ski boot. And it was a really old ski boot."

Over the years and thousands of shows The Hairfarmers have played in Whistler, they've seen their fair share of crazy antics. They don't even bat an eyelash at Currie's tale of someone drinking beer out of a dirty ski boot.

So, if those are the "normal" après sessions, what will the Olympicized versions be like? The Hairfarmers aren't going into the Games with any expectations, but they do plan to play their hearts out.

"You never, ever, ever mail it in! You play every show like your life depends on it, like it's the last chance you'll ever have to make people smile and dance, and you live your life that way, really," Reamsbottom said. "And the audience knows - they know whether you're just going through the motions or if you're layin' it down for real, and that's the trick, that's the secret."