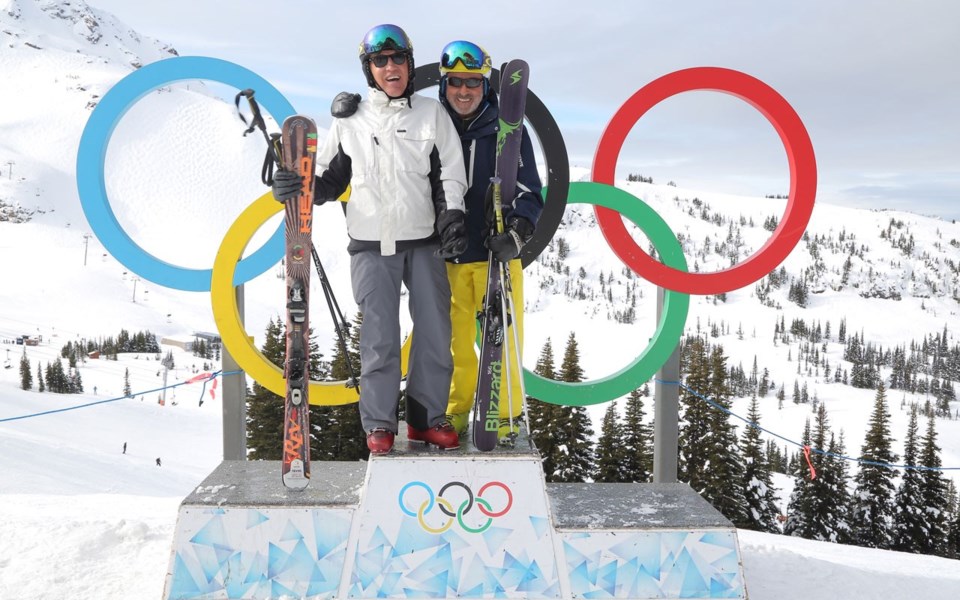 When Elton Hubner set out to make a documentary about seniors who were staying fit well into their golden years, he wasn’t looking for extraordinary subjects.

“I wanted to showcase people who have problems like anyone else does and show how they decided to overcome that,” he says. Still, it’s hard not to be at least a little in awe of the six athletic seniors who star in The Fit Generation, which was released last July, but is making its Whistler debut on Jan. 31.

Hubner searched high and low to find the right subjects. “I started telling everyone on Facebook and in person, ‘Hey, this is what I’m doing. I’m looking for people that are from the Lower Mainland or Whistler who would be great on camera, who have a character, and who practice different types of sports,” he says. “I started meeting a lot of people in person.”

One of those people was Richoz, who then referred him to Tjelios-Nicholas, who was slightly older than him and also a mainstay on the mountain.

“I said, ‘Why not? I have the time,’” Tjelios-Nicholas says. While Tjelios-Nicholas has dealt with his share of health problems—from knee replacements to prostate cancer and chronic back pain—he looks and acts nowhere near most 86-year-olds.

He spent most of his life as a businessman in Montreal—though he still skied, drove racecars, windsurfed, and rode bikes—but back in the late ‘90s, he followed his daughter to Whistler where she moved with her children, and became a ski instructor, a position he still holds today.

“I like living,” he says. “I’m an extrovert. I love living in Whistler. What I really like about Whistler is the people are super nice and there’s not much stratification here. Rich or poor, it doesn’t matter. Guys living in a $12 million home, the other guy living in his van, they’re still friends. That’s something special here.”

Richoz, meanwhile, credits his unending energy, in part, to coffee.

“I love coffee!” he says with a laugh.

It’s not uncommon for him to come home from a day of teaching skiing to chop wood or shovel the driveway.

Like Tejlios-Nicholas, part of the appealing of teaching skiing at an age when many people are retiring is its social nature. “Today I had a student from New York,” Richoz says. “We talked about the movie industry, Whistler Village, I love that … It’s super rewarding for me.”

Alongside an active lifestyle, Hubner said the other lesson he gleaned from the film’s stars was the importance of that type of community as you age.

In fact, seeing the value of connecting with family and friends prompted him to marry his now-wife, Michelle Hubner, who also helped with the film, during the three-and-a-half-year project.

“Larry, the guy who plays hockey, lives by himself and is a widower,” Hubner says. “[The hockey group] is the only group he socializes with. That was a big thing to me. We decided to get married in that process … most of the people from the film were invited to the wedding and they became part of our lives. George, Marcel, Joan [Richoz, Marcel’s wife], they’re friends of ours now.”

The 43-minute film—which also features cinematography by Whistlerite Chris Wheeler—had a private screening and a debut in Vancouver in the summer, but it has also earned awards on the festival circuit, including Best Director of a Short Documentary at the Nice International Film Festival in France and Best Director at The London International Filmmaker Festival.

Just having the production come out after doing it off the side of his desk for several years was fulfilling, Hubner says. “I ended up with 45 hours of footage,” he says. “Because I’m a full-time professional working with my company [Eyes Multimedia], my wife was a volunteer and everyone was volunteer with this. Many times I had to post-pone it. It delayed it a little bit.”

Aside from the upcoming Whistler screening, Hubner is in talks with a local company in the health-care industry that wants to licence it and show it across North America.

“What I want is as many people as possible to watch it,” he says. “The message is very clear, look, there’s no excuses. Whatever you’re facing, there’s no excuse. If you want to live a better life, do as these guys do. Go ahead and do it.”

Catch The Fit Generation at the Maury Young Arts Centre on Friday, Jan. 31 at 6:30 p.m.

Tickets are $15 for general admission or $10 for “the silver set.” For more, visit thefitgeneration.ca.